Did a video show a rude flight attendant getting served by karma after threatening to kick a passenger off a flight? No, that's not true: The misleading title of this video fails to deliver what is promised. The flight attendant is never rude, and the scenario that purportedly came back to haunt him, does not appear to have even happened. This video is a three-minute-long clickbait tease. Nothing really happens other than a typical pre-flight safety demonstration. This video is one of a series of videos that feature the same group of actors presenting fake, rude, tense or awkward, social dilemmas. 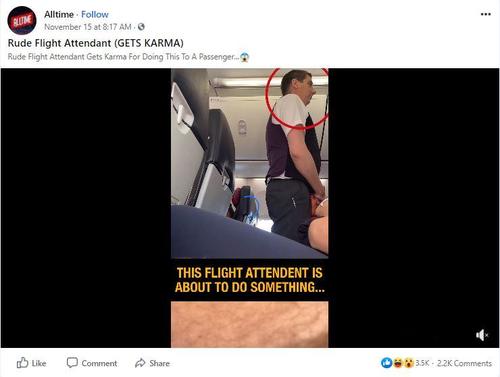 The video has captions which introduce and drive the narrative. The captioned drama is not reflected by the mundane footage of the flight attendant going through the pre-flight safety demonstration. The video is surreptitiously filmed across the laps of two passengers who do not have an armrest between them. A female voice gives the safety instructions over the airplane intercom as the flight attendant stands in the aisle and makes the motions of the pre-flight demonstration. The flight attendant never appears to speak, although his face is not always visible.

There never seems to be a face mask issue with the older couple across the aisle. At the point in the phoney narrative when the flight attendant allegedly is telling a woman that she will need to move her seat, he is fully occupied with the drop down oxygen mask demonstration. When he allegedly threatens to kick her off the plane (a male voice that is clearly dubbed in) the flight attendant is in the middle of demonstrating how to inflate the life vest. At no point in the video does a woman or her boyfriend get moved to first class, but a clip of someone's legs, reclined in a luxury cabin seat with a large TV screen, is edited into the video.

This is the fictional scandal presented in the captioning of the video (there are many typos):

This flight attendant is about to do something- He notice a passenger wasn't wearing a mask..."Hey can you please put on your mask please"- The flight attendant ask the passenger to put on the mask- But the passenger was not ready for what else is about to happen... Before the plane took off the flight attendant started too... Demand an elderly couple to put the face mask on... But things start to go wrong when the flight attendant... Asked to girl next to him to move seats because... "Unfortunately we have to move you to a different seat- is that ok? "She was taking up two seats because of her weight size... The girl didn't say anything at first until this happened... "Um excuse me do NOT speak to me like that!" The girl refused to move seats and was offended... But the flight attendant threatens too... Kick her off the plane! "I'm going to ask one more time or Im going to kick off the plane" Things only get worse frome here... "I refused to get off this plane I would like to speak to the manager!" The woman wanted to speak to the manager... The manager refused to speak to the girl... But the manager comes out with a supirse... The manager takes the woman to first class... The boyfriend came as well and this is how they reacted... But the elderly couple got jelious... What if someone did this to you? Was this justified? The flight attendant was sorry for his actions... The first class ticket cost over $5000... What would you do in this situation?

This video is one of a series of staged videos posted on the Alltime page where awkward or tense moments are "caught on camera". These videos are just over three minutes long, likely designed for monetization and engagement purposes. Another video (3:04) titled, "Rude Plane Passenger..." (here) was posted on October 22, 2020 may have been filmed on the same flight. The Rude Plane Passenger video features a male and female passenger who are fighting for control of the same armrest. The video is filmed from a different perspective than the "Rude Flight Attendant" video, but the blond woman is wearing the same dark leggings, a silver bracelet, and has a pale pink manicure. 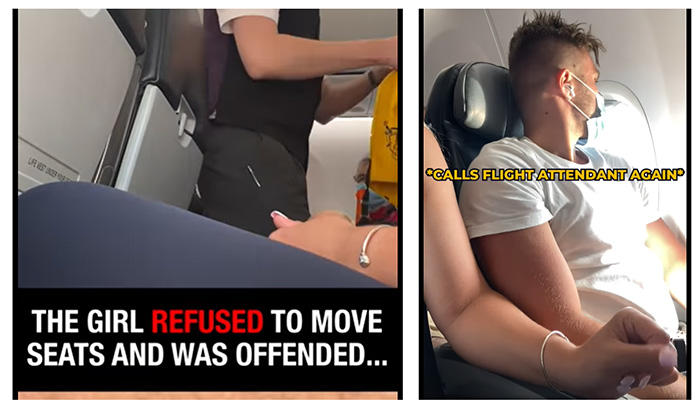 On November 4, 2020 the video, "Marriage Proposal (ENDS WRONG)" 'ends With $50,000 wedding going off the cliff' features the same couple who had the battle of the elbows in "Rude Plane Passenger". Other videos featuring these actors include, "Uber Steal" where a passenger steals money from the Uber Driver and then discovers that there was a camera filming. "Pregnancy Test Reveal (ENDS WRONG)," where a girl tries to prank her boyfriend that she is pregnant, but he flips out angry before she can tell him it was a joke, and "Rude Tinder Date (WON'T LEAVE)" where a young woman starts the day with a creepy, freeloading, unemployed man in her house. The montage below features screengrabbed images from those videos. 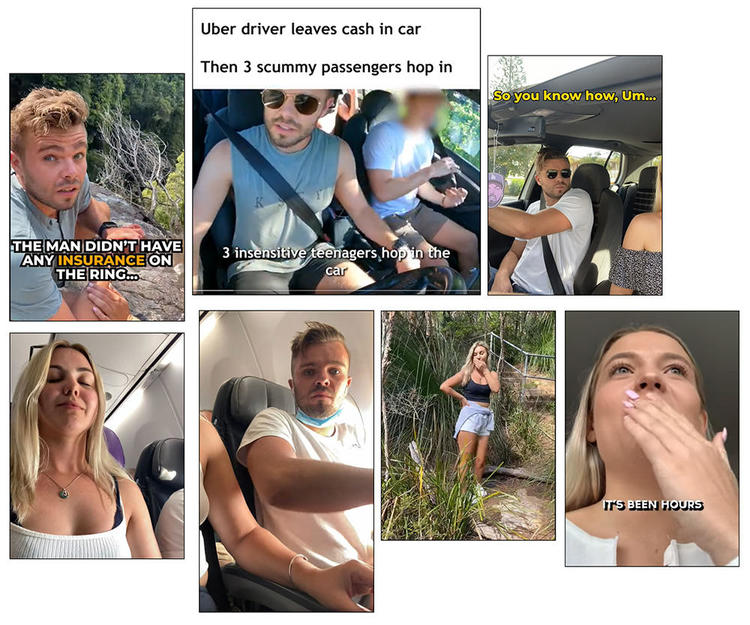 A collection of screengrabs from these staged videos.