Is there evidence of ballot dumping found to help Joe Biden in Wisconsin and Michigan? No, that's not true. An article published by OAN claimed there were instances of ballot dumps in both states from the November 3, 2020 presidential election. Both of these claims have been debunked by Lead Stories and other national news outlets. Ballots in Wisconsin were counted late in the evening, not "dumped" and there was no evidence of suspicious ballot dumping in Michigan either. Bi-partisan election commissions have certified Michigan's results.

The claim appeared in an article (archived here) published by OAN on November 19, 2020 under the title "Evidence Of Ballot Dumping Found In Wis., Mich". It opened:

President Trump is pointing to the latest evidence of an illegal ballot-dump in Wisconsin. In a tweet Wednesday, the President said Democrat Joe Biden received a major dump of more than 143,000 ballots on the night after the election.

Look at this in Wisconsin! A day AFTER the election, Biden receives a dump of 143,379 votes at 3:42AM, when they learned he was losing badly. This is unbelievable! pic.twitter.com/nhiLMmyHBn

Jonathan Martin, the national political correspondent for the New York Times, tweeted the counting process in Wisconsin was well known, hence there were no suspicious ballot dumps.

This tweet doubles as a testimonial for reading newspapers.

No matter their politics, anybody who chose to follow the race knew exactly how and when Wisc would report, would have antibodies to dismiss this conspiracy-mongering https://t.co/FiZJcJhLHC


Ballotpedia reported the process for counting ballots in Wisconsin began at 7:00am on November 3, 2020. The hundreds of thousands of ballots were counted throughout the day and the night, with ballots being delivered to central locations throughout the night. There was not an illegal dump but a simple counting of ballots and arrival of absentee ballot totals.

The Milwaukee Journal Sentinel published an article on November 4, 2020, about the ballots with an article titled, "Wisconsin did not 'find' 100K ballots around 4 a.m. the morning after the election, or take a break from counting votes."

'We are not finding ballots,' Julietta Henry, director of elections for Milwaukee County, told PolitiFact National. 'Ballots are being counted.'

The increase in the chart simply shows when the City of Milwaukee reported its absentee ballot results. We knew well before the election that Democrats were much more likely than Republicans to vote absentee, that it takes longer to count such ballots, and that Milwaukee is a Democratic stronghold.'

OAN also published a video within the article of an interview with a poll worker from Wayne County, Michigan, where Detroit is located, who claims she saw 30,000 ballots being delivered around 3:30 am the night of the election and she witnessed an invalid ballot being counted for Joe Biden and she challenged that decision. The article claimed:

Karamo, who was previously identified by local FOX2 Detroit new station as a conservative and adjunct professor at Wayne County Community College, said during the 43 minute YouTube video she saw "30,000 ballots showing up at 3am. Where did these ballots come from, who verified the signatures on these ballots? That was just suspicious. It was a big rollup door and a truck came and delivered them. I didn't see anything on the truck." 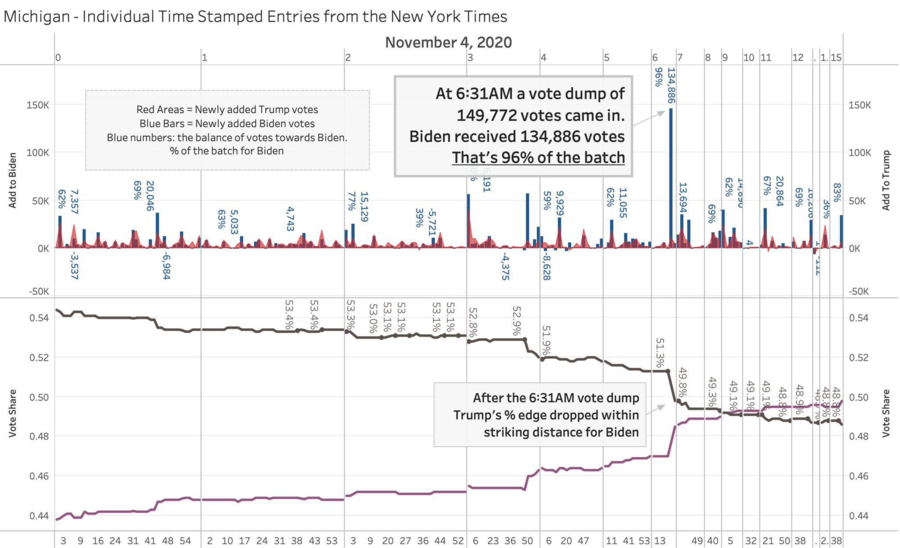 There is no evidence that there was a suspicious ballot dump in the middle of the night only in Wayne County as Karamo claimed.

There were claims on social media that a man in a white truck dumped ballots via a wagon at the TCF center late on election night which was debunked by local news and the reporter who was working with his crew bringing in equipment.

A conservative "news" site reports catching a man wheeling in "suspicious" equipment to the Detroit convention center, implying it was used to steal ballots.

The "ballot thief" was my photographer. He was bringing down equipment for our 12-hour shift. https://t.co/4UsRdOncZ3

Lead Stories reached out to the Michigan secretary of state for comment about Karamo's claims of a 30,000-ballot dump in Wayne County and witnessing one ballot being invalidated and will update this report, if appropriate, when the secretary of state's office responds.

On the state's website, the secretary of state released the following statement of confidence in the authenticity of Michigan's certified election results:

All Michigan counties certified their elections
The boards of county canvassers in all of Michigan's 83 counties have certified their results in the Nov. 3 general election. Each board is comprised of two Republicans and two Democrats appointed by the local county commission... Although the Board of Wayne County Canvassers initially deadlocked 2-2 in its Nov. 17 vote to certify, later in the same meeting, members voted 4-0 to certify. The initial vote was taken after some canvassers expressed concern about precincts that were out of balance in Detroit. However, out-of-balance precincts are common in Michigan and across the nation. They essentially represent clerical errors where the number of people who were checked into each poll book doesn't exactly match the number of votes counted or ballots submitted. There are many reasons why this can occur: for example, a voter being checked in at the right polling place but the wrong precinct, or a voter checking in but leaving with their ballot if the line was long. In fact, based on data reported at the Board of Wayne County Canvassers meeting, 72% of all Detroit precincts were balanced or explained, compared to just 42% in 2016, when both the boards of county and state canvassers certified the election.

Lead Stories has reached out to the New York Times to ask if that is a Times graphic or a graphic with data attributable to The Times and will update this report, as appropriate, when the Times responds.

NewsGuard, a company that uses trained journalist to rank the reliability of websites, describes oann.com as: