Were ballots marked with Sharpie pens invalidated in Arizona on Election Day? No, that's not true. Sharpies are preferred, said election officials. A claim has gone viral that people who voted in Maricopa County, Arizona, using Sharpie pens had their ballots invalidated and that only ballots marked with ballpoint pens were counted. "Maricopa County uses Sharpies on election day, because they are the fastest drying ink and they do not smudge the tabulator," Meghan Gilbertson, the communications officer for the Maricopa County Elections Department, told Lead Stories. "No ballots were invalidated because of Sharpies."

The claim appeared as a video (archived here) where it was published on Facebook on November 3, 2020. It opened:

The video shows an unidentified woman telling an unidentified man off camera that she witnessed two people vote using a Sharpie and their ballots were not "read." She claimed she used a ballpoint pen that the man filming the video had given her and her ballot was "read."

"There were two people in front of me that used a Sharpie that was given to them by the poll workers," the woman in the video said. "It did not read their ballot. They slid it in there twice. I used a pen ... took their Sharpie and threw it away and it read my ballot."

The man on the video claimed, "So, what they're doing is telling people to use the Sharpies that way those votes aren't counted. That's exactly what's happening."

The video was also posted on Rumble.com with the headline, "NOV 3 2020 Maricopa County Arizona Voter Fraud." 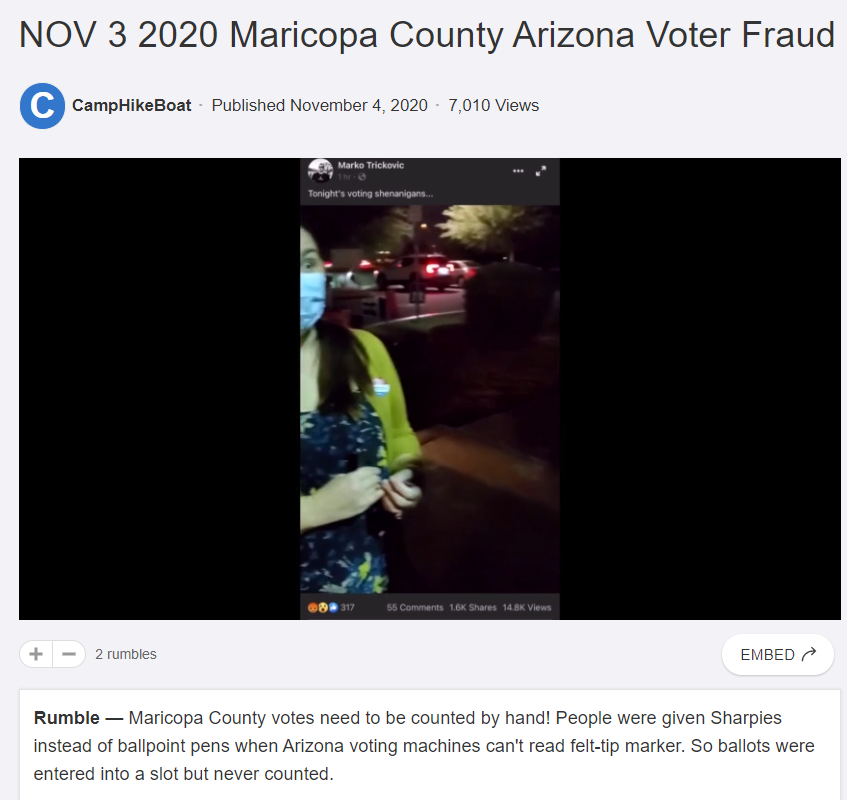 Gilbertson explained to Lead Stories why Sharpies are used at the voting locations in Maricopa County.

"Sharpies are the fastest-drying ink. The ink needs to be dry, otherwise it will cause smudges on the tabulator and cause future ballots to be misread."

Gilbertson said if there is a problem with the tabulator reading the ballot a voter can immediately request a new one. "The tabulator tells the voter specifically that the ballot can't be read and it will tell the voter they can spoil that ballot and get a new one."

Only a voter can "spoil" a ballot, which means they claim one is wrong and they want a new one, Gilberston said.

The people in the video claim poll workers were "yanking" ballpoint pens out of voter's hands and they had a large bowl of ballpoint pens they weren't using.

"The poll workers were instructed to have voters use the Sharpies because if they use the ballpoint pen and the pen had a blob of ink that was left on the ballot that ink would leave a smudge on the tabulator and the tabulator would need to be replaced or cleaned," Gilbertson said.

The people on the video claimed, "People are coming here to vote for Donald Trump and those votes are being invalidated."

Another user on Facebook claimed that she voted using a Sharpie on her ballot and dropped it in the ballot box during early voting but it was "canceled."

THIS IS MY VOTE! Arizona Secretary of State threw out my vote for Trump Bc I voted with a sharpie! I WAS HANDED A...

The woman explained how she voted in the comments section of her post. 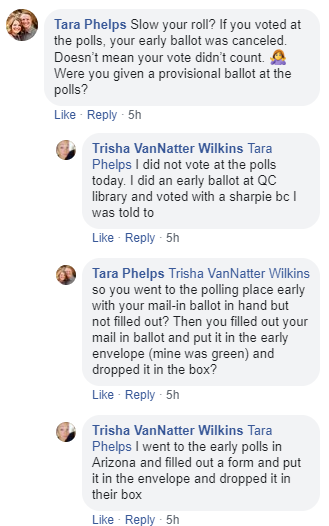 "No ballots were invalidated because of Sharpies," Gilbertson told Lead Stories.

She explained the voting equipment was updated in 2019 and there are new ballot styles that have offset columns so that if the ink were to bleed through to the other side the ink would not adversely affect a different spot on the ballot.

Gilbertson confirmed there was a sheriff called out to a location where a citizen was handing out ballpoint pens and flyers. "The citizen was providing misinformation to voters so we asked them to stop doing that. We have plain-clothed deputies that are available for elections calls, if it is needed, if that person is continuing to not respect the inspector. The sheriff's deputies are in plain clothes, they asked the citizen if they would cease their activity and they did."

The video explained Sharpies had the fastest-drying ink and that was why they are used at vote centers:

Did you know you can use a black or blue pen or Sharpie to fill out your ballot in Maricopa County? The new tabulation equipment only reads the ovals, so bleed-throughs are not a problem. The new ballot style also has off-centered columns that don't allow for bleed-throughs to fill out ovals on the other side of the ballot. At the vote center you may notice fine-tip Sharpies are used. That's because it's the fastest-drying ink and works best on the tabulation equipment. If you're filling out your ballot at home you can use blue or black ink with ballpoint pen or Sharpie. Just don't use red ink. The tabulation equipment cannot read red."

They also tweeted information about the Sharpies on November 3, 2020.

Did you know we use Sharpies in the Vote Centers so the ink doesn't smudge as ballots are counted onsite? New offset columns on the ballots means bleed through won't impact your vote! Find a location before the polls close at 7 p.m. today at https://t.co/8YEmXbWyRL. pic.twitter.com/KKG2O8rQhf