Did the post-Thanksgiving surge in COVID-19 cases after people traveled and gathered in groups -- which was predicted by Dr. Anthony Fauci and other health officials had warned would happen -- end up being a 'no-show'? No, that's not entirely true if you look at the absolute numbers: 70% of states set new peaks for cases of the novel coronavirus in early December 2020, Dr. Mark Cameron, an associate professor in the Department of Population and Quantitative Health Sciences at the Case Western Reserve University School of Medicine in Cleveland, told Lead Stories. He said the remaining states reached their peaks before Thanksgiving.

However if you look at relative numbers a case can indeed be made that the increase in average daily new cases didn't accelerate much after Thanksgiving compared to the period before it, meaning the holiday may not have been much of a factor in the current runaway growth nationally. But several experts have pointed to local surges that can be tied to Thanksgiving.

The claim about the "no show" appeared in a Daily Caller article (archived here but later substantially updated with data that does show there were some local surges; the Daily Caller informed us it was a draft that accidentally went up early) published on dailycaller.com on December 16, 2020 under the title " After Weeks Of Holier Than Thou Howling, The 'Thanksgiving Surge' Is A No Show. ". It opened:

After weeks of warnings, the 'Thanksgiving Surge' predicted by health experts who warned against traveling for the holiday is a no show. 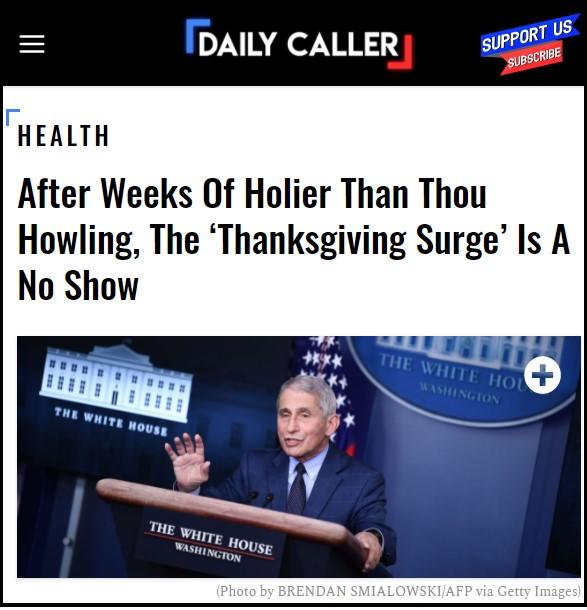 The original article attempted to prove Fauci, director of the National Institute of Allergy and Infectious Diseases, and other health officials were wrong about their fears of an increase in COVID-19 infection if people didn't follow the Centers for Disease Control and Prevention's recommendations regarding travel and group gatherings. On Thanksgiving Day, November 26, 2020, the national 7-day moving average for new cases was 168,064, according to the CDC COVID Data Tracker. Cases decreased in late November before steadily climbing again in December. By December 17, 2020, the 7-day moving average was 216,159. That lag-time is consistent with the incubation period observed thus far: it takes 2-14 days after infection to develop symptoms.

Lead Stories downloaded the data the graph was based on and calculated the daily change in the rolling average, expressed as a percentage of the day before. This basically tells you how steeply the red line in the previous graph is increasing or decreasing.

The graph shows the relative rise in average new daily cases wasn't markedly faster in the weeks before or after Thanksgiving on a national level, meaning individual infected people were each roughly infecting the same number of new people (there just were more infected individuals around to spread the virus). So there was a surge in absolute number of infections, but not much of a surge in relative increase.

The data, however, prove that the fears and warnings of Fauci and other were correct at least in some places. Fauci himself told BuzzFeed in an article about the apparent lack of an "additional" surge post-Tranksgiving:

The data shows a lag in reporting of cases and deaths over the Thanksgiving break, then a catchup in the next week or so, followed by a return to roughly the same trajectory as before. If there was a Thanksgiving surge, it is hard to see against the tidal wave of coronavirus cases that was already breaking over the nation.

"I was concerned about just continuing to go up and up and up," Fauci said.

But Fauci argued that the holiday likely did spur additional spread of the virus, at least in some regions. "If you and I were having this conversation and we said the United States is California, you would say absolutely California is having a post-Thanksgiving surge," Fauci said. "But then you look at another part of the country and you say, wait a minute, not only are you not having a surge, you're actually going down."

NPR also reported there were reports of a Thanksgiving surge in some states:

Three weeks later, many places are now contending with a wave of infections that local health authorities say were fueled by the Thanksgiving holiday, although some regions appear to have evaded a dramatic rise, at least so far.

"We are seeing a tremendous surge in cases in many locations around the United States that are associated with the Thanksgiving dinners, family get-togethers and social events," says Michael Osterholm, an epidemiologist and director of the Center for Infectious Disease Research and Policy at the University of Minnesota.

Much of the evidence comes from health departments that are tracing clusters of cases, but Osterholm suspects that hospitalizations and deaths -- "lagging indicators" -- will reveal the full impact in a few more weeks.

Dr. Mark Cameron analyzed state data on the Johns Hopkins Coronavirus Resource Center website, which includes CDC and other public data. This is what he said in an email to Lead Stories:

I use the Johns Hopkins site for trends over the last two weeks while showing their place in the long term epidemiological curves. If you look at the 14-day trend in new cases, the majority of states have indeed come down in the two weeks following Thanksgiving.

However, most dashboards only show the last 7 to 14 days in their case trends, which may lead to misunderstandings. If you dig deeper, you find that only 15 states experienced peak case numbers prior to Thanksgiving, with the rest setting new peaks in early December. Also, of those 15 states, only 3, Minnesota, South Dakota and Wyoming, avoided an arguable uptick in cases following Thanksgiving.

Cameron said the number of coronavirus cases may still rise:

[W]e know that it can take 3 or 4 weeks for new outbreaks to show up in the trends following a holiday, for example, the spikes following Memorial Day and Labor Day. All states are still accumulating cases, and very few (Vermont, DC and Hawaii) are below the WHO's [World Health Organization's] 5% test positivity threshold for recovery

Many measures, including an analysis of vehicle travel during the Thanksgiving holiday, done for the Associated Press, showed that people were more on the move than they had been earlier in the month. A December 3, 2020 AP article states:

Vehicle travel in early November was as much as 20% lower than a year earlier, but it surged around the holiday and peaked on Thanksgiving Day at only about 5% less than the pandemic-free period in 2019, according to StreetLight Data, which provided an analysis to The Associated Press.

Does Cameron see a link between the increase in coronavirus cases and other data mentioned in the article pointing to increased travel during the holiday?

The CDC has issued similar recommendations to Thanksgiving for travel and group gatherings during Christmas, New Year's and other holiday celebrations:

Celebrating virtually or with members of your own household (who are consistently taking measures to reduce the spread of COVID-19) poses the lowest risk for spread. Your household is anyone who currently lives and shares common spaces in your housing unit (such as your house or apartment). This can include family members, as well as roommates or people who are unrelated to you. People who do not currently live in your housing unit, such as college students who are returning home from school for the holidays, should be considered part of different households. In-person gatherings that bring together family members or friends from different households, including college students returning home, pose varying levels of risk.