Was a school bus found abandoned in Buckeye, Arizona, full of missing voting machines? No, that's not true: The bus was carrying office equipment that had been purchased at a surplus sale and all the invoices and receipts were present.

The original first-person account of what happened was posted on December 3, 2020. The story continues to evolve in subsequent versions. One post (archived here) published on December 5, 2020 was captioned:

Sharing...check this out.
This is in Buckeye Arizona!
Media is not saying anything about this.

They found an abandoned bus just off of East Hwy 85 with NV plates in Buckeye AZ that was FILLED WITH THE MISSING AZ VOTER MACHINES!

The Buckeye, Arizona, Police Department posted a statement on their Facebook Page regarding the 'suspicious bus' on December 4, 2020. It said:

MESSAGE FROM THE BUCKEYE POLICE DEPARTMENT REGARDING A PICTURE AND MISINFORMATION CIRCULATING ON SOCIAL MEDIA.
Both the Buckeye Police Department and an investigator from the Attorney General's office responded to this "suspicious bus." It was determined the bus was full of office equipment purchased at a surplus sale, complete with invoices and receipts. The information in the original post is inaccurate. Thank you, as always, for your support. 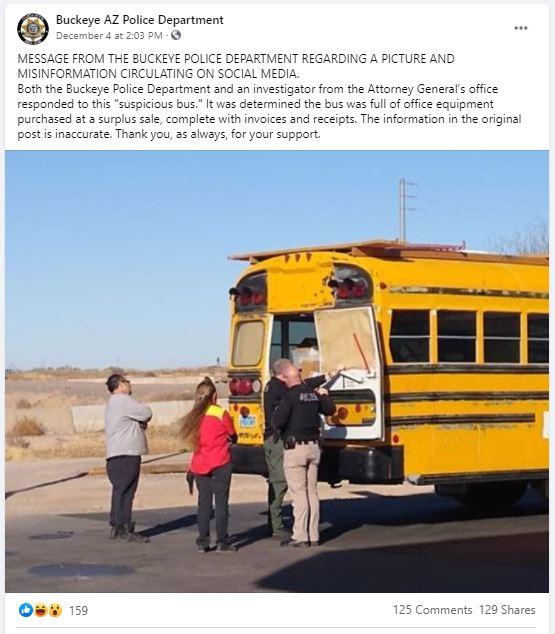 Two rumors circulating about this bus came from the original post made on December 3, 2020 by a customer at the gas station who took these photos.

This morning I stopped at the shell market on Buckeye road just east of hwy 85 for coffee! The place was crawling with police and investigators! Turns out the bus broke down in the early hours of the morning. No driver around but the police were called for suspicious vehicle. Turns out to have 2006 nevada plates. They opened the back doors and the bus is completely packed with voter machines! WTF!!!

One of the photos from the scene shows a yellow sticker on a piece of office equipment. This yellow sticker shows the ES&S logo and the company name Election Systems and Software. Below that the sticker reads: "For Printer Support Please call" and has further contact information. This sticker seems to be at the root of the rumors that the bus was full of voting machines. 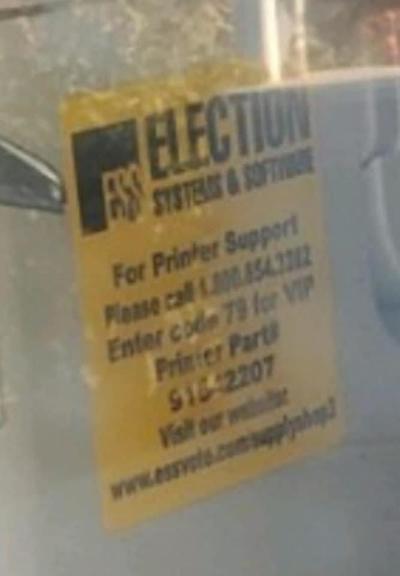 Lead Stories reached out to Election Systems & Software to find out what kind of a machine this was. The ES&S public relations manager responded:

The official website of the Nevada Department of Motor Vehicles shows that the registration for this vehicle is active and up to date.

Lead Stories has reached out to the Secretary of State and Attorney General of the State of Arizona and will update this story, as appropriate, when they reply.