Were thousands of ballots found floating in Lake Erie off the shore of Pennsylvania, a key battleground state? No, that's not true: This is a satirical claim that originated from a known satire website.

The claim originated from an article (archived here) published by "americaslastlineofdefense.com" on November 19, 2020 titled "Thousands of Ballots Found Floating In The Lake In Erie, Pennsylvania" which opened:

Federal election officials from the USA Department of Justice have swarmed to Erie, Pennsylvania, where a trash bag full of ballots has reportedly appeared floating just offshore.

Thousands of Ballots Found Floating In The Lake In Erie, Pennsylvania

And they said there was no fraud.

Claims made in this satire article recently started circulating as truth on social media. A twitter user posted the following tweet (archived here) that Sidney Powell, a former assistant federal prosecutor who has become the face of President Trump's legal battles over the election results, later retweeted:

3000 ballots found floating in the lake in Erie Pa. guess who they were for 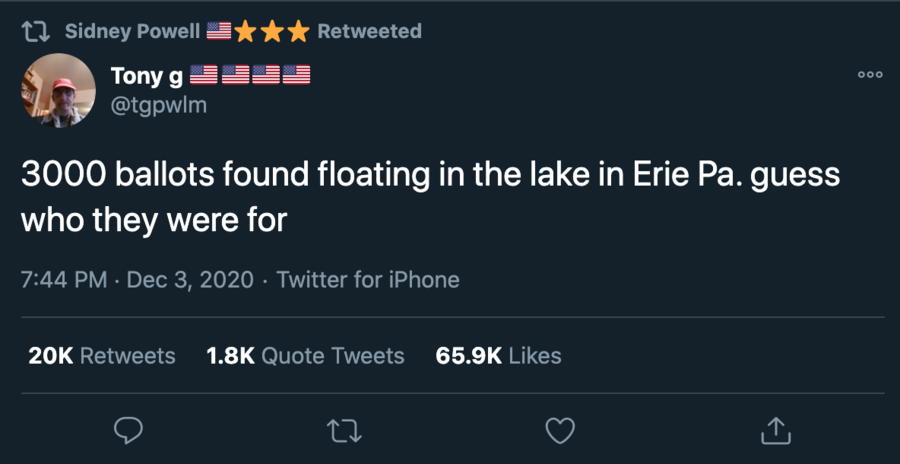 What's more, the satire article never states that the ballots were found to all be cast for President Trump. Rather, the third paragraph of the article says that what was recovered from the lake was "so damaged by the water that there was no way to determine what was in the bag without a full forensic analysis, which was performed by the FBI.

The site and others make up the "America's Last Line of Defense" network which is a collection of satire websites run by self-professed liberal troll Christopher Blair from Maine along with a loose confederation of friends and allies. He runs several websites and Facebook pages with visible satire disclaimers everywhere. They mostly publish made-up stories with headlines specifically created to trigger Republicans, conservatives and evangelical Christians into angrily sharing or commenting on the story on Facebook without actually reading the full article, exposing them to mockery and ridicule by fans of Blair's sites and pages.

Every site in the network has an "About" page that reads (in part):