Were U.S. Navy aircraft carrier fleets positioned off both U.S. coasts after the Supreme Court refused to hear the lawsuit seeking to overturn election results that cost Trump a second term? No, that's not true: A Pentagon source confirmed to Lead Stories that carrier ships are often positioned off both coasts of the United States and they were there Dec. 11 on routine missions. The claim also includes a previously debunked claim that China has amassed combat troops in Canada on the U.S. border.

Over the past four days, there have been MASSIVE movements of troops, equipment and supplies WITHIN the continental United States (CONUS). Today...

Over the past four days, there have been MASSIVE movements of troops, equipment and supplies WITHIN the continental United States (CONUS). Today...

U.S. Navy spokesperson Courtney Hillson told Lead Stories, "The U.S. Navy routinely operates off the coast of the United States. We disclose where those ships are operating. They have not been moved for any national tasking; they are conducting routine operations."

The Hal Turner Radio Show claimed there was movement of U.S. carriers in anticipation of the Supreme Court decision in the lawsuit Texas filed to overturn the results of the 2020 election in four swing states that cost Trump a second term. The article claimed:

Over the past four days, there have been MASSIVE movements of troops, equipment and supplies WITHIN the continental United States (CONUS). Today (Tue.), the US Navy is positioning Aircraft carriers and their strike groups off both the US east and west coasts. It appears we are preparing to defend ourselves from an invasion. China?

Here's a screenshot excerpt of the HalTurner show's web story, predicting unrest, as it appeared at the time of writing:

This morning, according the the US Naval Institute, the Navy has deployed THREE (3) Aircraft Carriers, plus a Landing Helicopter Dock (LHD) off the US West Coast, and TWO (2) Aircraft carriers and their Strike Groups plus another LHD off the US East Coast.

Both the Pentagon and the Navy denied this to Lead Stories via telephone calls the evening of December 11, 2020.

The Hal Turner radio show website published graphics of the location of ships which originated on the United States Naval Institute News website, a media outlet.

Below is the image of the ships posted in the article and originally posted on the USNI News website on December 7, 2020. 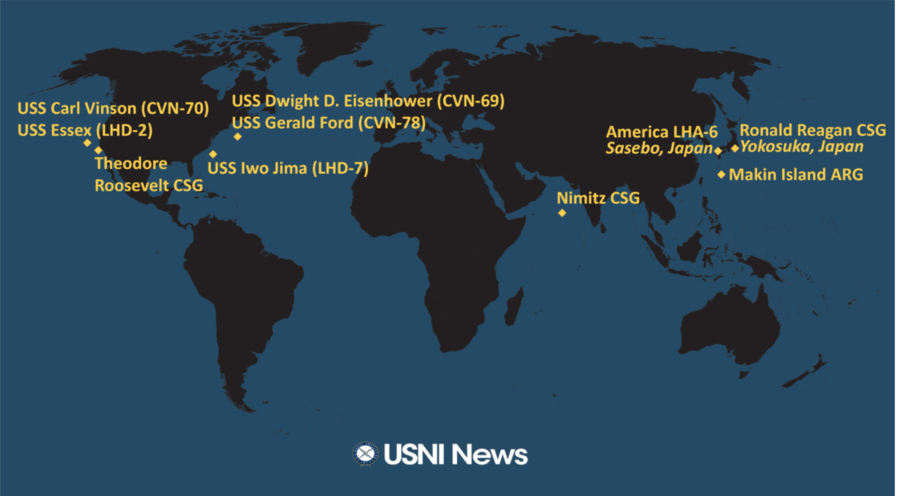 The previous "Fleet Tracker" post was published on November 30, 2020 and showed zero ships on either coast of the United States. 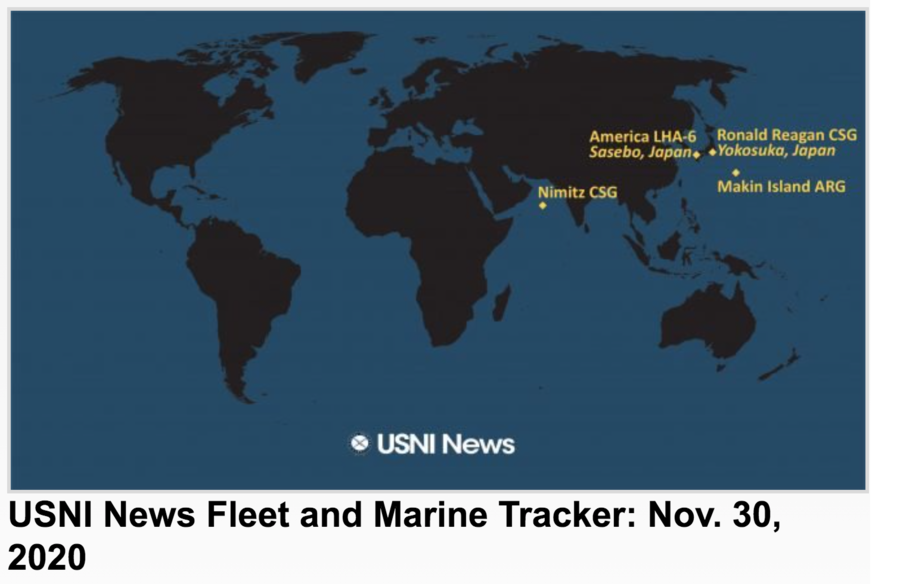 The Navy spokesperson told Lead Stories USNI News "is not the U.S. Navy," and that it was a "false assumption" made by the Hal Turner radio show to claim that there was an "ominous" positioning of Navy ships. Hillson said the USNI News fleet tracker map may not be updated with frequency.

A BitChute video posted by The Wil Paranormal account used the Turner story as the basis for a claim that the ships were positioned to support a purported invocation of the Insurrection Act by Trump. The caption read:

The United States has positioned 3 aircraft carriers off the East and West Coast of the United States along with accompanying battle ships.
President Trump will immediately implement the Insurrection Act in order to suppress any violence and allow for the arrests of all corrupt State Governors and for the closure of mainstream media television stations. These stations will be replaced with Alliance Patriot broadcasters.

Here's a screengrab of that item: 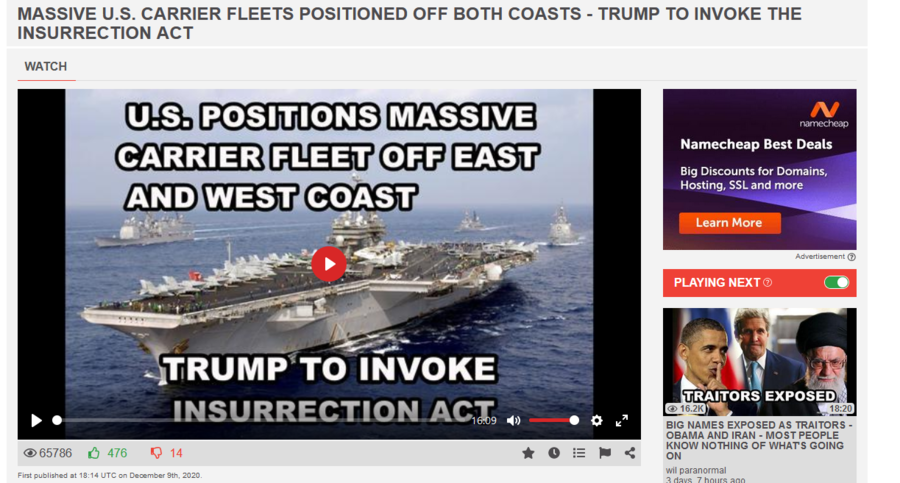 (Source: BitChute screenshot Sat. Dec. 12 03:57 2020 UTC)
Lead Stories previously debunked the claim that China using a treaty with Canada to mass tens-of-thousands of Chinese soldiers on the Canadian border in preparation for a military invasion of the United States.