Did a Dominion Voting Systems official admit in 2017 that its election equipment allows for votes to be switched? No, that is not true. Dominion has strongly denied that votes can be switched in its systems. No evidence is presented -- in a widely shared video clip -- that Dominion admitted to a vote-switching capacity in its equipment.The Dominion official in the clip, Eric Coomer, was demonstrating in Chicago how election officials could remedy issues when ballots are ambiguously or incorrectly marked.

The claim can be found in a post (archived here) published to Instagram by David Harris Jr. on November 25, 2020. The post, a video of Harris's radio program, carries the title "Dominion Admits Votes Can Be Switched," and opened:

Pretty much all the mainstream media, they're telling us there's nothing wrong with Dominion Voting Systems. Well, what about the VP of security for Dominion himself, Eric Coomer?...Eric Coomer admitted in 2016/2017 right in there that Dominion machines do not have the ability to root out fraudulent ballots."

The claim is false. The video that Harris shows during his program is but a brief clip of an hour-long video presentation Coomer and other Dominion officials gave to the Chicago Board of Elections in 2017 as part of an expo for vendors to pitch their equipment for upcoming elections. The clip is shown out of context by Harris.

Coomer, in the full video, answered many questions from the presentation's attendees concerned about election security. He assured them that Dominion's equipment was hack-proof -- modems used to transmit votes are offline while polls are open -- and that ballots are twice encrypted, cellular networks could not make sense of the voting data and only election officials could "adjudicate" a ballot that was improperly marked. Further, snapshots and records of each ballot are kept and any "adjudicated" ballots are electronically marked as audited for canvassing or recounts.

In other words, if a voter wrongly marked a ballot but was clear on who the intended recipient of the vote was, election officials could correct that in Dominion's systems. This would possibly happen if the oval next to a candidate's name was circled instead of filled in. But this would only change if the intention was clear. (It would be much like the hanging chad issue in the 2000 election that George W. Bush ultimately won.)

Here is the full presentation, which runs 57 minutes. The part highlighted by Harris as some sort of proof of Dominion admitting votes can be switched, starts at about 22 minutes.

In the expo presentation, Coomer describes the company's "digital adjudication system," which separates out "ambiguous" ballots marked incorrectly from ballots that have been filled out the right way. Officials can then inspect those ambiguous ballots and, if voter intent for a particular candidate is clear, the "election adjudicators" can tally the right vote and finalize the ballot.

In the video, Coomer walks through a demonstration and says:

This is a typical voter intent issue, where they didn't fill out the ovals completely -- they just made little tip marks. It's what's called an ambiguous mark. And what we're saying is, we don't know what the voter intent is, but we're going to allow the adjudicators to make that call based on any kind of state statutes."

Doing so would create an audit mark on the ballot, so that in canvassing or any recount, the computerized ballots could be double-checked against automatically generated copies.

Dominion has condemned conspiracy theories circulating before, during and after the election about its software and hardware. After then-Trump attorney Sidney Powell spun conspiracies about alleged voter fraud and rigging the election result, Dominion released a statement on November 26, 2020 -- the day after Harris's post ran -- that opened:

While Dominion Voting Systems is not named as a defendant, on Wednesday, November 25, 2020, Sidney Powell released what appears to be a very rough draft of a lawsuit against the Republican governor and secretary of state of Georgia alleging a bizarre election fraud conspiracy that--were it possible--would necessarily require the collaboration of thousands of participants, including state officeholders, bipartisan local elections officials, thousands of volunteer Election Day poll watchers in thousands of locations across the state of Georgia, federal and state government technology testing agencies, private elections service companies, and independent third-party auditors. This quite simply did not occur."

In the statement, found here, Dominion lists and rebuts each charge listed by Powell: 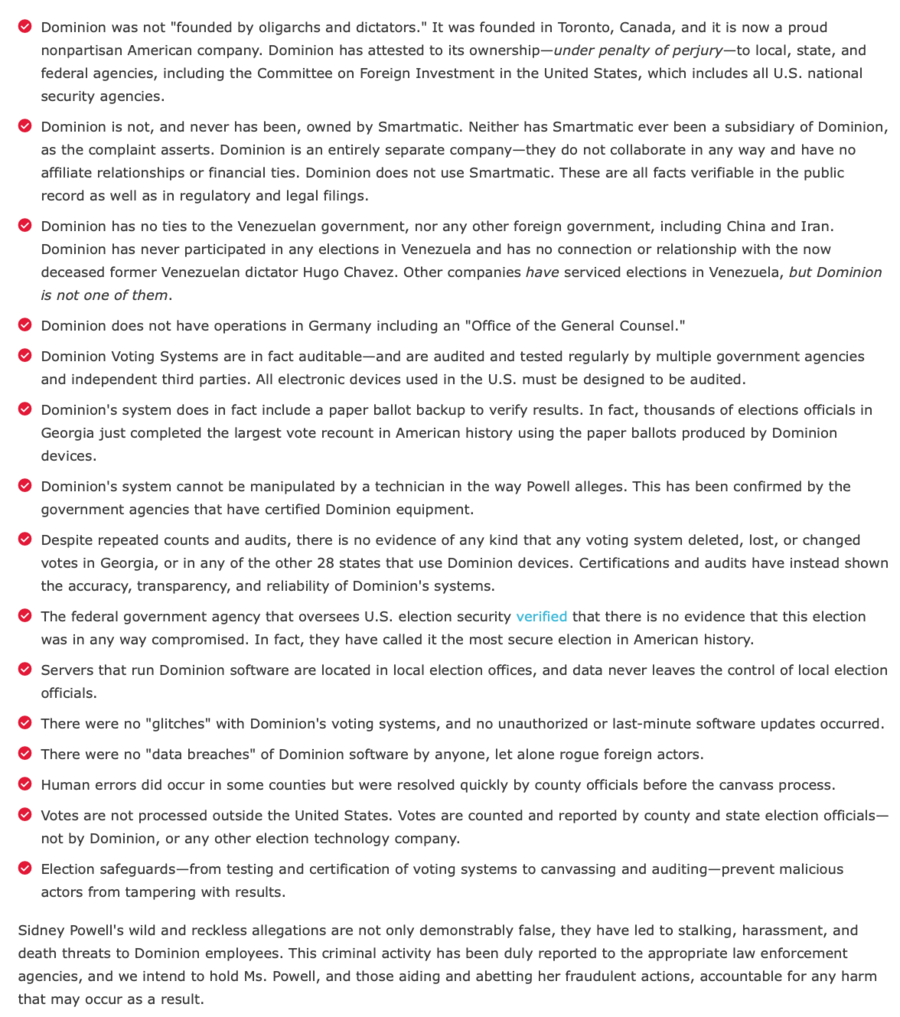 Online conspiracies, many stoked by President Trump and his lawyers, have circulated since even before Joe Biden was projected the winner of the presidential election over Trump. But on December 1, 2020, Attorney General William Barr told The Associated Press the Justice Department had turned up no evidence of widespread voter fraud that would alter the election's outcome. Trump's camp responded, saying the comment by Barr was speaking before "any semblance of a Department of Justice investigation."

Chris Krebs, the ousted director of the CISA -- the Cybersecurity & Infrastructure Security Agency -- whom Trump fired after Krebs called the 2020 election the most secure in U.S. history, walks through election security myths and misinformation in this video:

Even with Krebs' firing, CISA still has a page dedicated to #Protect 2020 Rumor Vs. Reality here, which features Krebs' video.

Attorney General William Barr in an interview with The Associated Press on December 1, 2020, said the FBI and Justice Department have found no evidence of widespread fraud that would have changed the outcome of the election.