Did a pro-Trump "operative" uncover thousands of counterfeit November 2020 Fulton County ballots stored in an Atlanta warehouse? No, that's not true: Photos of boxes of ballots showed emergency paper ballots stored in the warehouse as back-ups in the event voting machines failed on election day. Election rules require each county to hold emergency ballots equal to at least 10% of the number of registered voters. These ballots are not fake and were not used. A county elections official offered to let the doubters inspect the warehouse and the documentation of how many were ordered.

The claim appeared in a tweet (archived here) posted by Patrick Byrne, who described himself on Twitter as an "Advocate of constitutional republicanism for government, blockchain for institutions, and educational choice for human capital, on January 1, 2021. The Twitter thread included several photos of cardboard boxes labeled "Fulton Nov 2020 ELECTION DAY". The initial tweet read:

BIG NEWS: COUNTERFEIT FULTON COUNTY GEORGIA BALLOTS. On a tip, our operative entered the Fulton County (Atlanta) Warehouse and took this series of photos: THESE ARE FAKE BALLOTS (note the quantity):

BIG NEWS: COUNTERFEIT FULTON COUNTY GEORGIA BALLOTS. On a tip, our operative entered the Fulton County (Atlanta) Warehouse and took this series of photos: THESE ARE FAKE BALLOTS (note the quantity):

This is one of the photos included in the tweet: 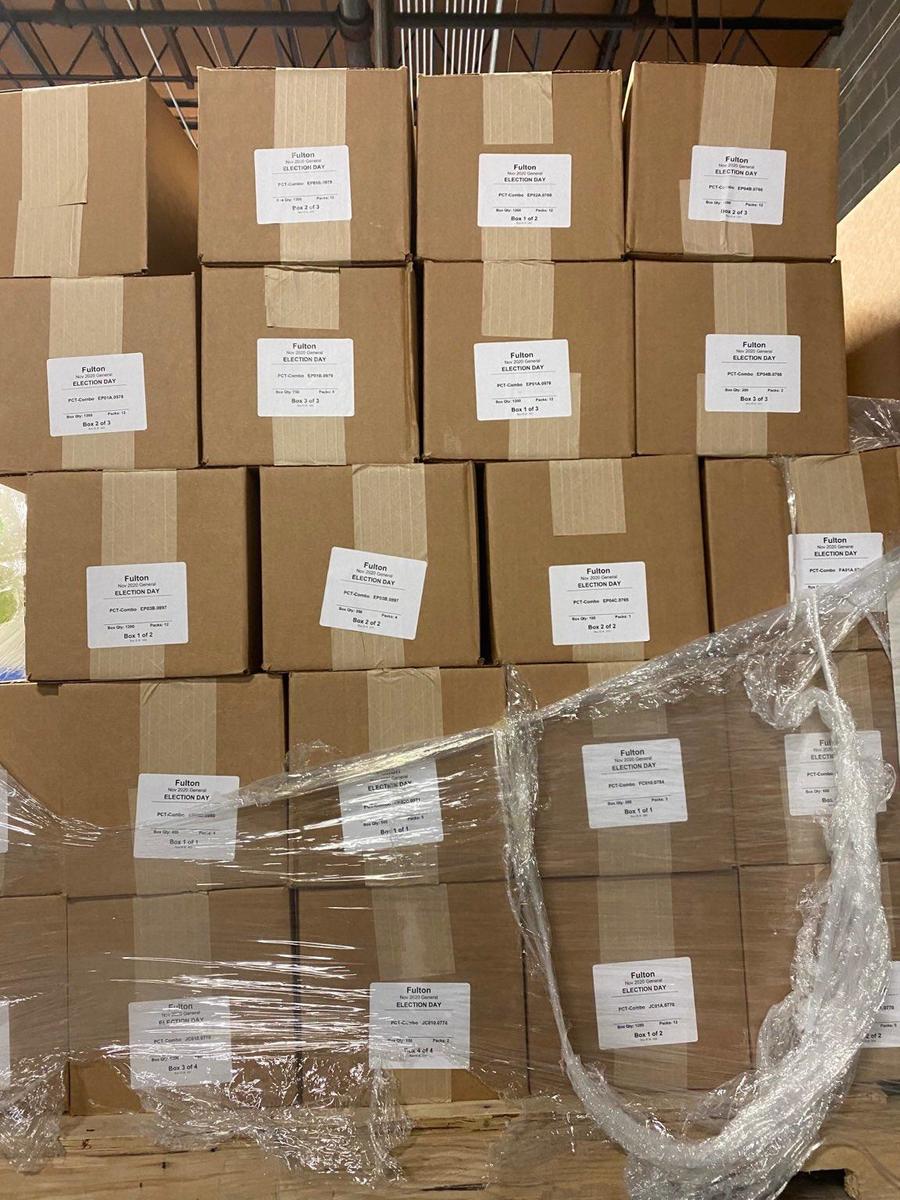 A representative of the Fulton County elections department confirmed in an email that the boxes contained "extra Nov 3 ballots if we had to go all paper." Doubters "can feel free to check how many were ordered and how many we still have unused."

An official with the Georgia secretary of state's office pointed Lead Stories to the "RULES OF THE STATE ELECTION BOARD", which require each county to print at least enough emergency paper ballots for 10% of its registered voters (see page 10 of this document.):

(c) If an emergency situation makes utilizing the electronic ballot markers impossible or impracticable, as determined by the election superintendent, the poll officer shall issue the voter an emergency paper ballot that is to be filled out with a pen after verifying the identity of the voter and that the person is a registered voter of the precinct. Emergency paper ballots shall not be treated as provisional ballots, but instead shall be placed into the scanner in the same manner that printed ballots in the polling place are scanned. The election superintendent shall cause each polling place to have a sufficient amount of emergency paper ballots so that voting may continue uninterrupted if emergency circumstances render the electronic ballot markers or printers unusable. For any primary or general election for which a state or federal candidate is on the ballot, a sufficient amount of emergency paper ballots shall be at least 10% of the number of registered voters to a polling place. The poll manager shall store all emergency ballots in a secure manner and ensure that all used and unused emergency ballots are accounted for. All unused emergency ballots shall be placed into a secure envelope and sealed such that the envelope cannot be opened without breaking such seal.

BIG NEWS: You just discovered emergency backup paper ballots, which Georgia law requires counties to have in case the voting machines go down or some other problem occurs.

They're very real, and tracked if they are used.

I won't hold my breath for this to be deleted, though. https://t.co/c5FyB732tS

While Byrne may think his photos are "BIG NEWS", his "operative" was just recycling an old hoax. Atlanta lawyer Lin Wood, a leader in the Georgia voter fraud conspiracy movement, made the same claim in a December 13, 2020 tweet:

Hey @FBI @GBI_GA @BrianKempGA @GeoffDuncanGA & @GaSecofState, why are there boxes of GA mail ballots hidden in warehouse in Fulton County, many shipped from Arizona?

GA election was a fraud. Do your damn jobs. pic.twitter.com/o2bWi6g8LI

It was false then and it is still false. The ballots are legally required and are not fake.