Did Olive Garden announce it was revoking the "Never Ending Pasta Pass" for any customers identified as a participant in the invasion of the U.S. Capitol, along with the revocation of Sean Hannity's "Lifetime Pasta Pass"? No, that's not true: The person who created the meme has acknowledged he was making a "social media statement" as a joke. He has deleted the original post.

The appeared in a post (archived here) published on January 8, 2021, under the title "There's NO WAY this is real". It opened:

At Olive Garden, "We're all family here." Our traditions, like unlimited soup, salad and breadsticks, have been enjoyed all over the country and throughout the entire political spectrum.
It has come to our attention that a few of our guests had taken part in a viscous attack on our nation's Capitol. We have worked with the FBI and the Holiday Inn in Washington, D.C. to identify several guests who both frequented our restaurants and participated in the violent uprising against our government this week.
In response, Olive Garden has invalidated our Never Ending Pasta Pass for several guests and revoked a Lifetime Pasta Pass from Sean Hannity.

This is the meme: 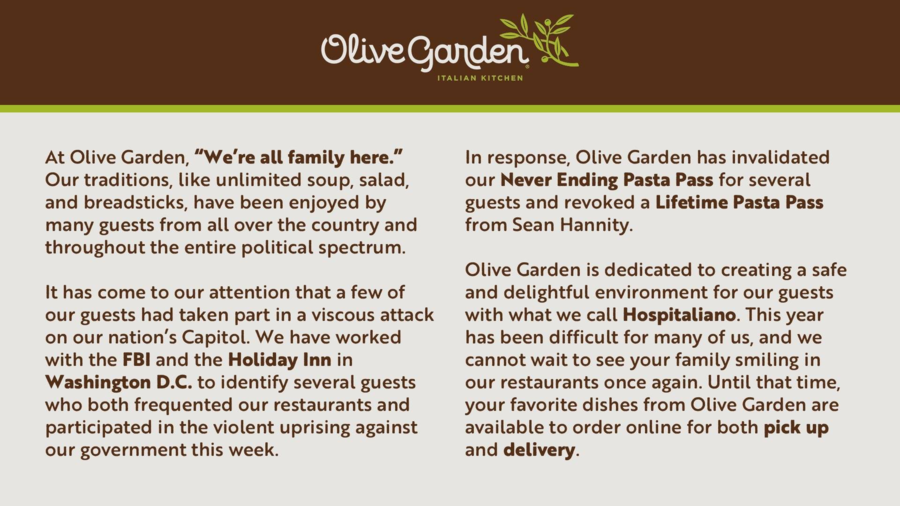 While some people may believe it is a real Olive Garden statement, most people quickly realize it is a joke. The person who created it eventually deleted it because of the confusion:

This morning I made a "social media statement"-style joke image as if it had come from Olive Garden, and I want to talk about why I made it and why I deleted it.

Just so I'm abundantly clear: it's not a real statement. pic.twitter.com/hTf2ymub5P