Did Nancy Pelosi send an official letter urging Mayor Ted Wheeler of Portland to go by the "Democratic play book" when dealing with protests and protest-related violence in his city? No, that's not true: Secretarial correspondence code indicates this is a doctored digital copy of an unrelated letter. Neither Speaker Pelosi nor her office sent a letter containing the contents posted online to Mayor Wheeler. "Mayor Wheeler has never received this specific letter or anything similar from Speaker Pelosi," said Timothy Becker, the public information officer for Mayor Wheeler's office.

The claim appeared in a Facebook post (archived here) where it was published on January 10, 2021. "SHE INSTRUCTED PORTLAND MAYOR TED WHEELER: "WHEN ALL HELL BREAKS LOOSE AND YOU NO LONG CAN KEEP ANY ORDER, THEN GO TO THE CAMERA BLAME TRUMP, AND SHOW YOUR SUPPORT TO ANYBODY BREAKING THE LAW. THIS IS THE POLITICAL GOLD!!" OH YEAH! HOW WONDERFUL," the caption on the post read in part. The fake letter opened:

I have seen your response to the riots in your city and I am urging you to stick to the proven Democratic Play book. I would like to review this with you now.

1: Deny there is a Problem, (Press will support this)

2: Refer to everything as peaceful and calm, (Press will help here also)

3: When all hell breaks loose, go on camera and show your support for anybody breaking the law. (Press will praise you for this, you will be a new hero, trust me).

4: When you can no longer keep any 0rder "BLAME TRUMP!" (I cannot over emphasize #4, This has worked every time we have used it and again the Press has told me they will support and fact check any claim we make!! THIS IS POLITICAL GOLD!!)

Simple image analysis shows how the doctored letter was pasted together to look official.

A journalist and Twitter user, @BrendanKeefe, first showed where the letter was pasted together in this tweet:

Even after the disinformation has a body count, it continues. This is going around social as a letter removed from Speaker Pelosi's desk. I found the original hand-signed letter on eBay. I also enhanced the image to show where it had been cut & pasted. These lies have cost lives. pic.twitter.com/C83HmrspxZ

Keefe matched also the lower-right-hand internal office tracking code to a Pelosi letter that had been offered for sale online to autograph/letter collectors. 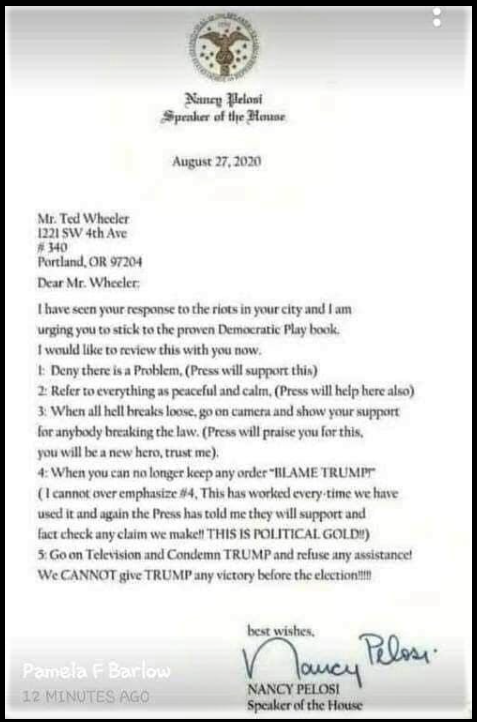 Lead Stories used the standard Windows screenshot tool to adjust the "light" setting, revealing what looks like evidence that the image is a composite of pieces cut and pasted onto a new image. Here is that light-adjusted version of the image: 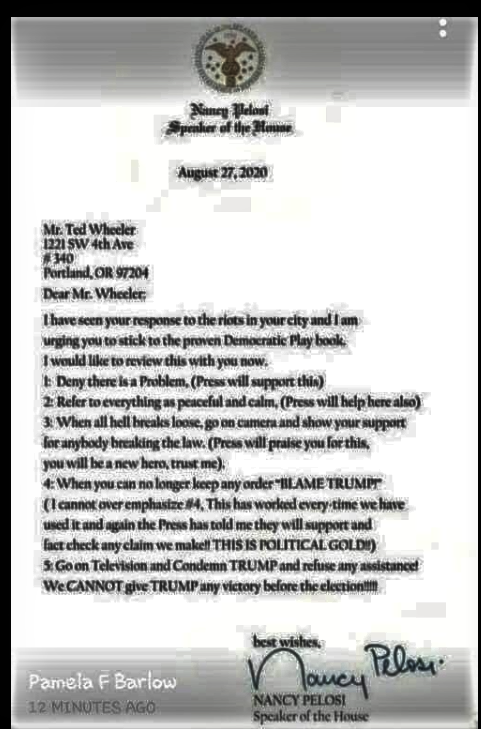 Portland, Oregon, has become a calling-card for those on the right when criticizing Democratic-run cities and their responses to the racial equality and police brutality protests over summer 2020. Portland's newspaper, The Oregonian/PortlandLive.com, has documented that across 100 days of protests, there were at least 675 arrests, "immeasurable amounts of tear gas and countless injuries" in addition to hundreds of fires around the federal courthouse in downtown Portland. Police declared a riot almost every third day. The points outlined in the letter match frequent criticisms and conspiracies people on the right push about Democratic politicians and the media.