Does the name and logo of the Cracker Barrel Old Country Store originate from a barrel of whips? And further, did "blacks call whites 'crackers' from the crack of the whip"? There are two different claims here, the first is false, and the second is partly false. The trademarked name Cracker Barrel Old Country Store was named after the original old-fashioned way that soda crackers were packed, shipped and sold -- in bulk, by the pound from a barrel. The term "cracker barrel" eventually became an adjective at least as far back as 1916, to suggest the friendly character of an old-fashioned country store. The term "cracker" as an adjective to describe a person has dueling origins. One collection of evidence points back to Scotland where the term cracker meant boastful. The commonly cited origin has to do with where a person is from, typically in the southern U.S., from Florida or Georgia, and is only used for people who were the earliest settlers in that place. Yes, the person called a cracker may have gotten that name from the crack of a whip, but it was not the whip of a slave-owner, but of a cowboy driving cattle in the thick marshy landscape of Florida, the Carolinas and Georgia.

The claim captured in a screenshot was posted in a tweet (archived here) published on February 8, 2021, with the caption, "Did y'all know this?" The screenshot had text added to the photo, reading: "Damn I never noticed the whip." The original caption in the screenshot read:

Cracker was a slang term for whip. Thats why blacks called whites crackers, from the crack of a whip. A cracker barrel is a barrel that held the whips for sale at the country store. You see the whip going from the R to the K? Racism in your face!!

This style of "fast fact" or "Did you know?" meme is a common format that seeks to gather engagement from satire joke sharing and snark, sometimes to trick the gullible and sometimes as a straw man. This is not the first time the Cracker Barrel Old Country Store has been targeted over the word cracker in its name. On July 15, 2015, FoxNews.com published an article, "Satirical petition calls for Cracker Barrel to change name to 'Caucasian' Barrel." That joke petition closed out with 15,828 signatures.

On the Crackerbarrel.com FAQ page, the question of the origin of the name is explained this way:

Where did Cracker Barrel get its name?
When our founder, Dan Evins, opened the first Cracker Barrel, he was passionate about recreating old country stores from his childhood along interstates and highways so that travelers would always have a place to stop, relax, get a good country meal and feel at home. Crackers used to be delivered to those old country stores in barrels, and people would congregate around them to discuss the news of the day - they were the original water coolers! Since the restaurant was meant to help people reconnect with friends and family over a good meal, it was a fitting name.

To give a practical example of the cracker barrel in use: In 1847, in an already competitive cracker-baking market, Adam Exton founded a cracker company in Trenton, New Jersey. The cracker barrels are mentioned in this writeup from the Museum of American History:

OTC® Oyster Crackers were introduced in Trenton, N.J., in 1847 by Adam Exton, an English immigrant. Exton conceived the idea of baking a cracker to be used in oyster stews. In 1848, one year after the Exton crackers arrived on the Trenton scene, Ezekiel Pullen began baking an "Original Trenton Cracker" in the kitchen of his home. He sold his crackers from the back of his wagon as he made his way along Trenton streets. Both businesses grew as a craze for oysters developed in the 1860s and 1870s. OTC ® crackers became available from wooden barrels in neighborhood stores and in seafood restaurants. During the Civil War, the Exton company supplied its crackers to the Union army.

Below is an example of an authentic Exton's Cracker Barrel which was featured in an article in an auction finds blog. 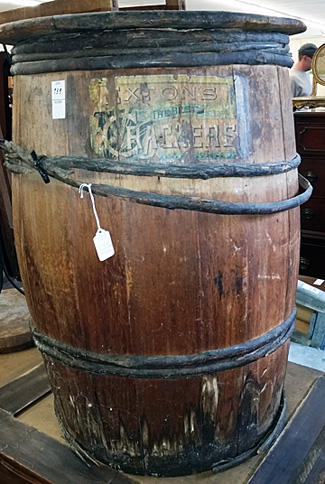 Merriam-Webster.com says the first known use of the term as an adjective was in 1916 and offers this definition for the term:

: suggestive of the friendly homespun character of a country store // a cracker-barrel philosopher

The second part of the claim, that blacks call whites crackers because of the crack of the whip, is not reinforced by the written record or cultural beliefs of the people from Florida and Georgia who use the term "cracker" not as a slur but as a cultural and geographic identity with deep family roots. There is even a living history museum on the Florida State Fairgrounds called "Cracker Country."

There are several theories about where the term cracker originated and the one most commonly cited, while it does have to do with the crack of a whip, is not the whip of a cruel slave master, but the whip of a cowboy. Herding the almost wild Spanish-type cattle in the thick vegetation and hot marshy environment of Florida took special methods. The cracking bullwhip is the iconic tool which gave the Florida cracker cowboy their name. The Florida Cracker Horse, sometimes called the Marsh Tacky, was also uniquely suited for this task. 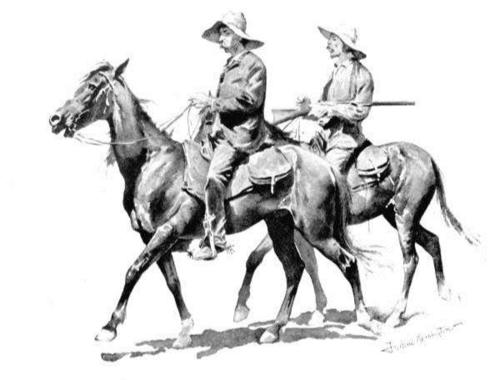 The other source of the term "cracker," originally a Scottish term meaning boastful, was applied to poor, white people who lived in some of the most remote areas of the American colonies, as far north as the Ohio River valley. At this time Florida would have been still a territory of Spain. There are many written records from the 1700s using the term cracker and most of them are unfavorable. British Colonial Officer Gavin Cochrane wrote back to the Earl of Dartmouth on 1766 with this report:

I should explain to your Lordship what is meant by crackers; a name they got from being great boasters; they are a lawless set of rascals on the frontiers of Virginia, Maryland, the Carolinas and Georgia, who often change their places of abode. They steal horses in the southern provinces and sell them in the northern and those from the northern they sell in the southern. They get merchants by degrees to trust them with more and more goods to trade with the Indians and at first make returns till they have established some credit, then leave those that trusted them in the lurch, return no more but go to some other place to follow the same practice.