Did a buff father who "identifies as the tooth fairy" knock the teeth out of a man pretending to identify as a woman who followed his daughter into a public restroom? No, that's not true: The meme is a mash-up of fabricated events that mock transgender women, attached to an authentic photo of a protective father.

The memes featuring this photo first appeared in 2019 but have resurfaced in 2021. One post (archived here) published on January 4, 2021 has the caption, "I believe I can identify with the tooth fairy." The text on the meme says:

A man followed a young girl into a bathroom at Gastonia Target, saying he identified as a woman. The man's teeth were knocked out by the girl's father, who says he identifies as the tooth fairy.

The path to how Gavin Johnston's photo came to appear in the "tooth fairy meme" is complicated and the last step is still a mystery: It is not known who combined Johnston's photo with the tooth fairy text, which mocks language sometimes used by or about transgender people to describe their gender.

On April 19, 2015, an Instagram account, @thefatjewish, posted a photo of Gavin Johnston and his daughter. The photo showed a buff dad posing with his daughter, who is wearing a T-shirt printed with a photo of her dad, shirtless and flexing, and the words: "Stay clear boys, this is my dad!"

At the time, @thefatjewish was known as "The King of Instagram" and had over 3 million followers. This set the photo on a viral trajectory. That same day, Kit Dale, a world pro Brazilian Jiu Jitsu champion shared a copy of the photo on Facebook. People had mixed feelings about the photo. The commenting-on and sharing of Dale's post drove the photo further.

On April 23, 2015 a journalist at News.com.au made a mistake, assuming that the buff dad was Dale. Dale shared that article on Facebook with the caption:

The article has been deleted and it seems it was never archived. But in the thread of comments below Dale's post, Gavin Johnston identified himself as the man in the original viral photo and shared another photo posing with his daughter. He commented:

THIS IS ME PEOPLE

I apologise mate, only started as a joke on FB, next thing i know it's escalated to this!!!
The story got well and truly blew out of proportion, I live in the UK haha
She's my princess though....so it was joke no joke

The new photo of Johnston and his daughter then got swiped by meme makers, who turned Johnson into the "father who identifies as the Tooth Fairy" in memes that mock transgender women and replicate the claims of critics that male sexual predators will pose as transgender in order to stalk girls into public bathrooms.
The screenshots below show the Instagram post of @thefatjewish, the comments in Kit Dale's thread by Gavin Johnston that introduced the second photo to the internet, and the "tooth fairy meme" that appeared in 2019. 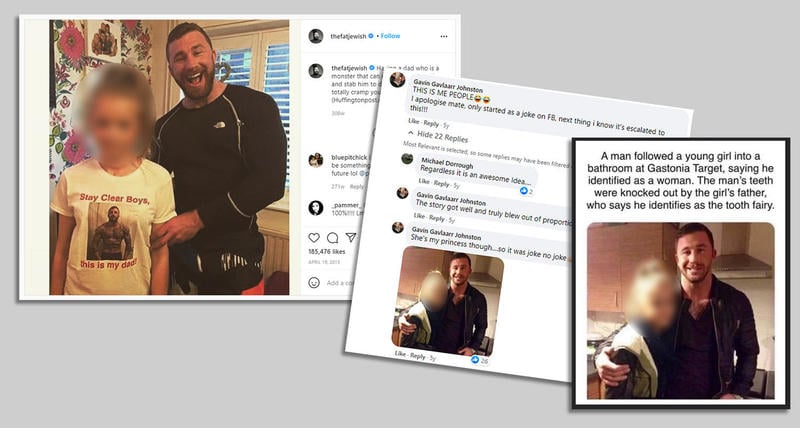 Below is a collection of "tooth fairy memes." The format of these memes with nearly identical text began to appear on Facebook in April 2016. In some instances, the tooth fairy story appears as the caption posted with a meme. One version says Texas, another London, another Target. The text of the meme featuring Gavin Johnston says the incident happened at the Gastonia, North Carolina, Target, but Johnston lives in the U.K.

A Reuters.com fact check article verified with the Gastonia, North Carolina Target that no similar incident had occurred at that store. 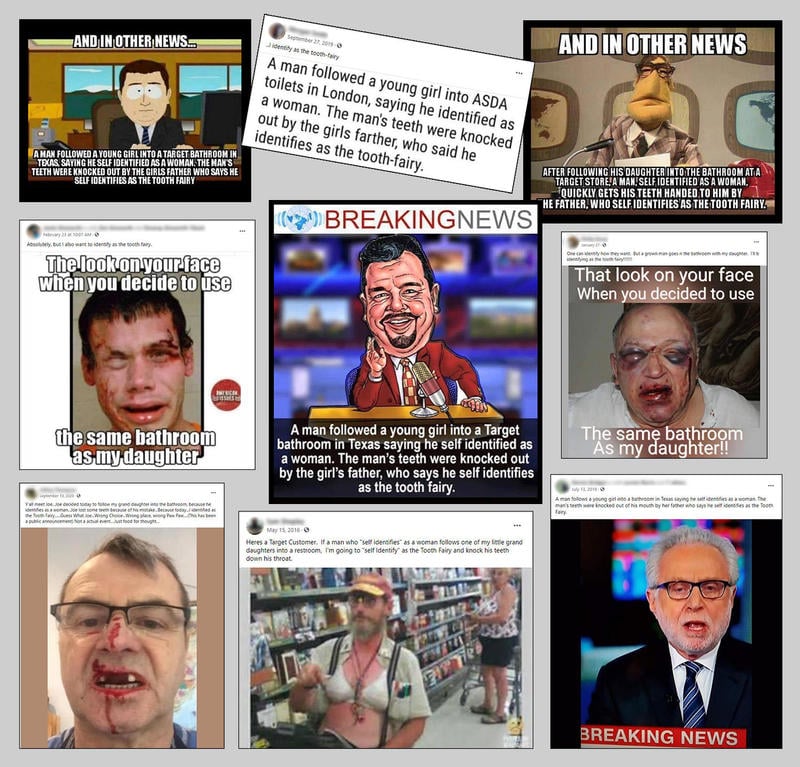