Was the knife on the ground when police in Columbus, Ohio, arrived at what would become a deadly shooting scene? No, that's not true: It was being wielded by the teen who was subsequently shot and killed, according to police and body camera footage of the fatal incident.

Please DO NOT ignore this

As the George Floyd verdict was being announced, Columbus Ohio Police killed 15 year old Makhia Bryant. She called the police as she was about to get jumped. She had a knife in her hand for self defense, but when officers arrived it was on the ground away from her. The officer immediately opened fired shooting her 4x's.
Let's get her name trending like we did Floyd's and get justice for her as well.
#JusticeForMakiyahBryant

This fact check does not encompass all the post's claims. There's a lot about the police shooting of the Black teenager that remains unknown. Still, some details have emerged, including the fact that the knife was not on the ground as the post claims.

Interim Columbus Police Chief Michael Woods held a press conference the same day as the shooting, April 20, 2021. He told reporters that officers were dispatched after a "caller said females were there trying to stab them and put their hands on them." It's unclear who made the call. Woods then played body camera footage from the officer who fired his weapon. He showed the video twice -- once at normal speed and once in slow motion. Woods said:

We will now show you the video in slow motion, so you can see what the video shows is the female with the knife attempting to stab the first female that lands on the ground, and then the second female that is pushed against the vehicle.

You can watch the video here:

The video appears to show what Woods described. Shortly after the officer arrived, the teen described by Woods as "the female with the knife" appears to lunge at another female, who falls to the ground. The officer shouts, "get down, get down!" The lunging teen then appears to charge another female, dressed in pink, who gets pinned against a car. From the footage, it's clear the lunging teen is holding a knife. It falls to the ground after the officer fires several shots, striking that teen. Below is a screenshot showing the knife in the teenager's hand: 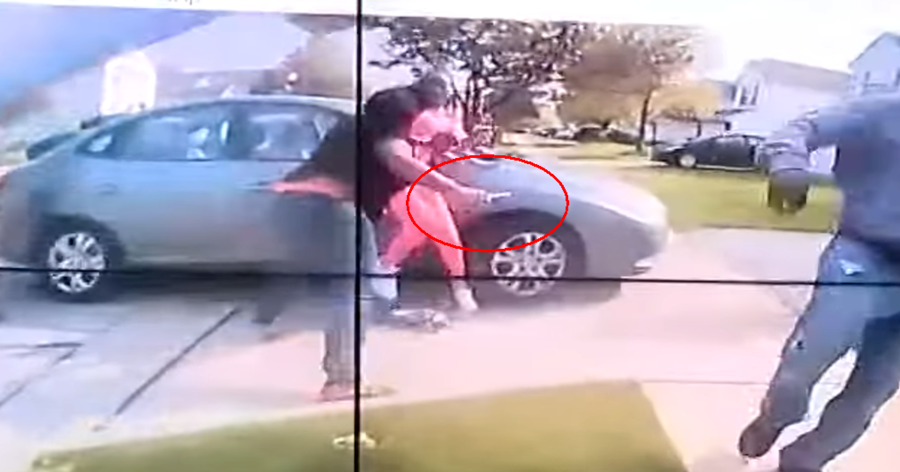 Another post (archived here) on Facebook claimed that the teen who was shot "was holding a Knife defending her self from other girls trying to jump her and the White cop jumped out the car and shot the Baby in her chest 4 times never said put the knife down no nth!!"

It's not clear what happened before police arrived, but the video does not appear to show young women trying to jump the teen who was subsequently shot. Also, the officer did not get out of the car and immediately open fire. He can be heard asking: "Hey, what's going on?" And then:

According to Woods, the officer involved will be taken off the street while Ohio's Bureau of Criminal Investigation reviews the case.