Is it illegal for businesses to ask for proof of vaccination or to require proof of vaccination as a condition of entry? Furthermore -- if a private business owner or employee were to ask for proof of vaccination would that constitute a violation of the protection of a person's rights guaranteed by the Fourth Amendment to the Constitution or by Civil Rights Act, and could the punishment for that "crime" include life in prison or the death penalty? No, that's not true: The legislation cited in the meme does not apply to private business owners. The Fourth Amendment applies to actions by the government, not private citizens or private businesses. The Civil Rights Act prohibits discrimination based on race, color, religion, sex or national origin. Legal complexities presented by the COVID-19 pandemic may be addressed in new legislation in the future, and several states have already taken action, but the meme misrepresents the application and protections of important federal legislation and inappropriately applies it to private businesses setting their own guidelines.

The meme produced by the Peggy Hall's activism organization TheHealthyAmerican.Org appeared in a post (archived here) where it was published by Texasseceded on May 18, 2021. The post was captioned, "Link in bio. I know her from my days at the freedom rallies in California. Peggy is great." The text in the meme begins:

Businesses cannot legally ask for proof of vaccination-- and cannot deny entry based on vaccination status
This is a violation of your privacy and property rights as protected by state and federal law.

The Fourth Amendment of the U.S. Constitution states, "The right of the people to be secure in their persons, houses, papers and effects, against unreasonable searches and seizures, shall not be violated.' 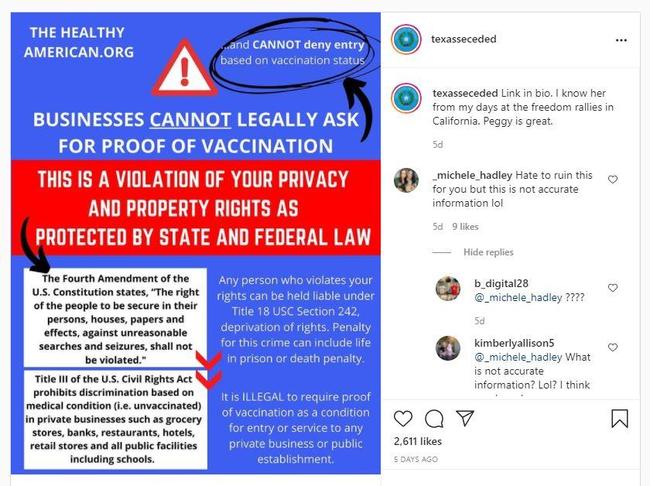 The text in the meme continues:

Any person who violates your rights can be held liable under Title 18 USC section 242, deprivation of rights. Penalty for this crime can include life in prison or death penalty.
It is ILLEGAL to require proof of vaccination as a condition for entry or service to any private business or public establishment.

Lead Stories reached out by telephone to Liz Sepper, professor of law at the University of Texas to find out if any of the acts cited in the meme could apply to a private business asking for proof of vaccination. No, they don't. She explained that the Fourth Amendment applies to the government, not private businesses, and asking for proof of vaccination is not a search of a house or person. The American Disabilities Act protects people with physical or mental disabilities, but a person's vaccination status is not a disability. Likewise the Civil Rights Act focuses on inherent characteristics such as ancestry/race, color, religion, or national origin-- not whether a person has chosen to be vaccinated.

The part of the meme regarding Title III is confusing because it appears that the author cited Title III of the Civil Rights Act of 1964 which concerns desegregation in public facilities, but perhaps intended to cite Title III regulations of the Americans with Disabilities Act, which apply to public accommodations in private businesses. In either case, neither of these acts applies to the question of whether private businesses could ask if their patrons were vaccinated.

The meme makes it sound like a person could be put to death for asking someone if they have been vaccinated. The full text of U.S. Code 242 can be found here. This code includes an uncommon phrase, "under color of any law." The Department of Justice website explains that this section of code applies to federal, state and local officials, judges, law enforcement, and public officials who might misuse the authority of their official position. Owners of private businesses do not act under the color of law as they do not have governmental authority. Hence, Title 18, U.S.C., Section 242 does not apply to them. While the code does mention life in prison or a death sentence, this is only if one of the aforementioned public officials commit a violent crime or kills someone.

In recent months, several states have enacted new legislation, amended old legislation or have a bill in the works related to vaccine requirements. Each state's law is unique, but there are common themes. Most legislation ensures that the state will not design or issue any sort of proof of vaccine document, and that state agencies will not require proof of vaccination; this typically also includes private businesses with state contracts and private businesses who receive state funding but many bills stop short of extending the prohibition to private businesses. Typically there are exemptions for nursing homes and assisted living facilities, even those with state funding, so that these facilities may require proof of vaccination. Arkansas, Idaho, and Utah are examples of this. Alabama's law says that if there are ever mandatory immunizations, that there could be exemptions in certain circumstances including religious, medical reasons or other personal beliefs.

Some state legislation does include private businesses along with the state agencies who may not ask for proof of vaccination. There is typically specific mention that nursing homes are exempted and that private businesses, although not allowed to ask for proof of vaccination, are not prohibited from screening for COVID-19. Iowa, Minnesota, Montana and Gov. Ron DeSantis' executive order in Florida are examples of this.

An amendment of the Tennessee bill which is ready to be signed by Gov. Bill Lee, says that the government may not require private businesses to check if people have been vaccinated as a condition of entry -- the law does not prohibit private businesses from electing to do that on their own.