Is the Keystone Pipeline closed and is that causing a gas shortage? No, that's not true. The gas shortage on the East Coast of the United States in May 2021 was triggered by a cyberattack that caused the shutdown of the Colonial Pipeline, which runs from Houston to New Jersey and supplies 45% of the gasoline to the East Coast. The Keystone Pipeline from Canada to the U.S. is not closed. President Joe Biden in January 2021 revoked the permit for an add-on to the Keystone system, but the rest of the system is still running.

When you can't find gas, remember who executively ordered the Keystone Pipeline to close.

A cyberattack halted fuel movement through the Colonial Pipeline, which shifts gas from refineries in Texas to distribution centers on the East Coast, according to the US Energy Information System. Colonial Pipeline shut down distribution on May 7, 2021, following the cyberattack. This caused the fuel shortages on the East Coast of the United States. 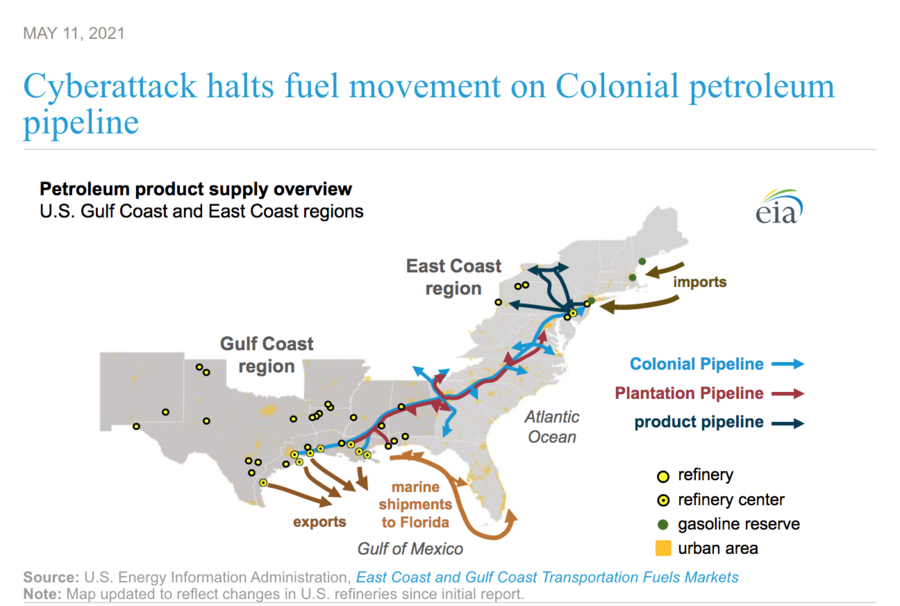 From the US Energy Information System:

Colonial Pipeline, a major delivery system spanning from the U.S. Gulf Coast to the East Coast for transportation fuels and other refined petroleum products, halted operations on Friday, May 7, to contain the effects of a cyberattack. As of Monday, May 10, the pipeline had not resumed operations of its main lines, although some smaller lines are operational. The company announced that it hopes to restore service by the end of the week.

Colonial Pipeline, a 2.5-million-barrel-per-day (b/d) system of approximately 5,500 miles of pipeline, is a significant mode of shipment for transportation fuels for the East Coast, particularly for several states in the southeastern United States. The pipeline carries refined petroleum products such as gasoline, diesel, heating oil, and jet fuel from Houston, Texas, on the U.S. Gulf Coast up to Linden, New Jersey, and serves several markets along the route through various branch lines. Because no refineries between Alabama and the mid-Atlantic produce substantial quantities of transportation fuels, the southeastern United States is supplied primarily by pipeline flows, and to a lesser degree, with marine shipments from the U.S. Gulf Coast and imports.

The Keystone Pipeline moves crude oil from tar sands refineries in Canada and the Midwest to refineries in Texas. It is not shut down. President Joe Biden signed an executive order on January 20, 2021, revoking the permit for the Keystone XL, which stands for Keystone "export limited," segment of the Keystone system, which is the fourth phase of the system.

Here is a map of the current Keystone Pipeline from the company's website. Solid green shows the full length in operation and the dotted green line shows the proposed Keystone XL project that was halted in January 2021:

Lead Stories has debunked other false claims about the Keystone Pipeline projects impact on gas prices here and here.