Is the Pfizer COVID-19 vaccine composed of 99.99% graphene oxide, does it have the effect of making vaccinated people magnetic and was this ingredient added to the vaccine to murder people? No, none of these claims are true: Host Stew Peters and Jane Ruby, frequent guest to his online show, have extrapolated from their distortion of a report by a Spanish scientist to mean that there must be a plot by vaccine companies to commit mass murder. This is false. There is no proof the Pfizer COVID-19 vaccine contains graphene oxide.

The complicated story originated in Spain and quickly traveled through anti-vaccine channels in late June 2021. The Spanish report was used as the foundation of an episode of the "Stew Peters Show" that aired on July 5, 2021, on Redvoicemedia.com. The video (archived here) is titled "BREAKING DISCOVERY! THE ACTUAL CONTENTS INSIDE PFIZER VIALS EXPOSED!" It is captioned:

Scientists have examined the Pfizer 'vaccine', and what they found was HORRIFIC...It's Poison! Dr. Jane Ruby joined Stew on the show.

This is how the video appeared on redvoicemedia.com on July 6, 2021: 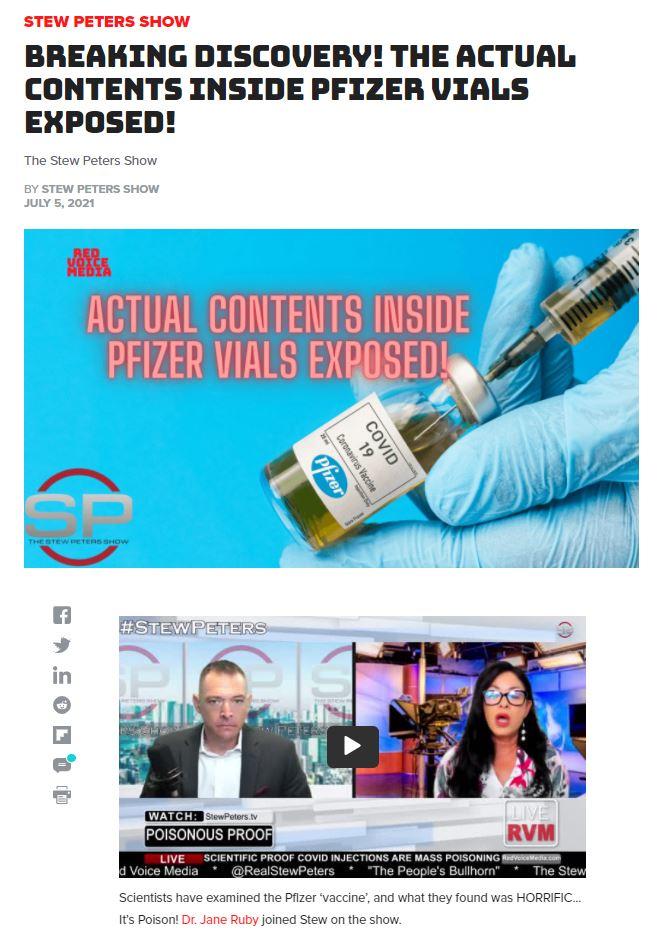 Introducing Jane Ruby one minute into the video, Stew Peters makes the claim:

You are now here, willing and ready to say that this is a hundred percent proof that this is nothing but mass poisoning -- mass murder -- genocide!

Jane Ruby draws back from that claim:

Well Stew, I'm not going to say that it's 100% proof because even the researchers themselves are aware of their limitations ...

Professor Pablo Campra of the University of Almeria in Spain was hired to examine a sample alleged to be of the Pfizer vaccine. He published a provisional report on June 28, 2021, about what he observed of the sample using an optical and an electron microscope. This came at the request of Ricardo Delgado, who runs a website (laquintacolumna.net) and a livestream Twitch channel. Campra specializes in lab biotechnology and horticulture as it applies to the climate.

It should be noted that Delgado is not a researcher without bias, but a crusader against "this tyranny of COVID-19" as evidenced by the dedication that appears 10 minutes into this video.

Although Ruby refers to "researchers," "the group" and says "they are associated with the University of Almeria," implying that many scientists are working on this together, this is a misrepresentation of a nonexistent partnership between Delgado and Campra. Lead Stories reached out by email to Campra, who clarified that there is no association with La Quinta Columna.

On July 2, 2021, the University of Almeria published a tweet "in relation to the false information disseminated on some social networks and blogs."

It is flatly false that the University of Almeria has carried out a scientific study with the results that are being published by those media that, on the other hand, are misrepresenting the content of an unofficial report by a University professor about an analysis of a sample of unknown origin with total lack of traceability. Report that this university neither subscribes nor shares, as the report itself warns.

The University of Almeria, as an academic institution, seamlessly supports vaccines as scientifically unquestionable instrument to fight against diseases.

The University of Almeria studies and reserves the possibility of directing civil and criminal actions against those who continue to disclose the falsehoods that this communication denies.

Beyond the cover page of Campra's report, on the first page in large bold lettering, is this notice:

IMPORTANT NOTICE
A microscopic, observational and merely descriptive study of the test sample is presented below.
Definitive identification of the dominant material in the sample requires further fractionation and specific spectroscopic analysis to characterize the structure of the material.

The next page of the report describes the sample that was delivered to him by courier:

Delgado had been promoting theories about post-vaccine magnetism prior to this and had a theory that the alleged magnetism was caused by a material called graphene, and that graphene was in the COVID-19 vaccines. A vial marked "Comirnaty" was obtained and sent to Campra. (In Europe the Pfizer vaccine is known and labeled by the brand name Comirnaty.)

Campra, asked to test this sample to see if there was any graphene present, compared his microscopy images from this vial with images of graphene. These images and photos of the graphene sample vials are included in the report, which finishes with this conclusion:

CONCLUSIONS AND RECOMMENDATIONS
1. The microscopic study of the sample provides solid evidence of the probable presence of graphene derivatives, although microscopy does not provide conclusive evidence. The definitive identification of graphene, oxidized graphene (GO) or reduced oxidized graphene (rGO) in the RD 1 sample requires the STRUCTURAL CHARACTERIZATION through the analysis of specific spectral patterns comparable to those published in literature and those obtained from the standard sample. obtained with spectroscopic techniques such as XPS, EDS, NMR, FTIR or Raman, among others.
2. The analyzes in this report correspond to ONE SINGLE SAMPLE, limited in total volume available for processing. It is therefore necessary to carry out a significant sampling of similar vials to draw conclusions that can be generalized to comparable samples, recording origin, traceability and quality control during storage and transport prior to analysis.

Disclaimer
The results and conclusions of this report do not imply any institutional position of the University of Almería • Neither the Principal Investigator nor the University of Almería assume any responsibility for the content and opinions of third parties on this report from its possible dissemination on social networks or the media, or the conclusions that may be drawn from it that have not been made explicit in the text.

The title photo for this edition of the "Stew Peters Show" features a syringe being filled with a dark amber-colored liquid from a vial that bears the Pfizer logo and is marked "COVID 19." This is a stock photo from August 11, 2020, before any COVID-19 vaccines became publicly available. The photographer produced a series of stock vaccine images featuring labels with the names of different makers and liquids of different colors. This is not a photo of an actual vial of Pfizer's COVID-19 vaccine or label. The real Pfizer COVID-19 vaccine is a "white to off-white" liquid and the design of the vial labels can vary by country,

Three minutes into the Stew Peters Show video, Jane Ruby does some questionable math. She says:

Here is the ratio of what they found in those vials, in each dose -- each dose Stew -- the RNA, there was RNA material in there and it was at the amount of ... and don't worry about the metrics, the measure units, because it's the ratio that's important -- Out of each dose there were 6 nanograms per uL of RNA.
Do you know how much graphene oxide was in there? 747 nanograms! Do the math my friends -- that is a percentage of 99.99103%, it's virtually 99.99% graphene oxide.

The measure of metric units described in the report should not be dismissed -- as what is being described is a weight, nanograms (ng) within a liquid measure, microliters (uL). Ruby compares the ratio of the two substances and declares that the vaccine is 99.99% graphene oxide.

Lead Stories reached out by telephone to Daniel Kelly, an assistant chemistry professor at Indiana University, to gain a better understanding of these units of measure. He explained that one microliter of pure water has a mass of about 1 milligram, or 1 million nanograms. So 747 nanograms of material would make up 0.0747% of one microliter by weight. Ruby also ignores that graphene oxide is a dark gray to black material -- if a vial contained 99.99 percent graphene oxide, it would be dark gray and also would be a solid, not a liquid.

The source of the sample is unknown, and the testing methods used to examine the sample, as explained by Campra in his report, are not the conclusive spectroscopic analysis required to know what the material is.

The ingredients listed on Emergency Use Authorization fact sheet for the Pfizer-Biontech Vaccine do not include graphene:

On July 6, 2021, there was an additional unverified report with microscopy images from an unnamed scientist published by La Quinta Columna, this time regarding the AstraZeneca vaccine.

The AstraZeneca COVID-19 vaccine also does not have graphene listed in the ingredients.

Lead Stories has reported previously on claims made by Jane Ruby on the "Stew Peters Show" that a magnetic component was added to the vaccines. Additional fact check reporting about this situation in Spain, including statements from several European scientists can be found (here) at maldita.es.