Would taxing churches in the U.S. result in taxpayers paying only around 3% of what they pay now? No, that's not true: Although religious institutions may receive an estimated $71 billion in tax exemptions, the 3% statistic does not appear to have any basis in the amount of taxes foregone as a fraction of taxes collected on taxable entities. Churches would have to be saving more than a trillion dollars per year through tax exemptions, not the $71 billion cited with the claim.

If the church paid taxes, everyone would only have to pay 3% in taxes
Tax the churches

The $71 billion in religious tax exemptions figure might have come from an estimate based on extensive research by Ryan Cragun, a professor of sociology at the University of Tampa, and two of his students. In 2012, the group had a research report published in Free Inquiry, a journal published by the Council for Secular Humanism, titled "Research Report: How Secular Humanists (and Everyone Else) Subsidize Religion in the United States." The report cited its basis for its estimates in the summary, including mentioning that ministers can opt-out of the Self-Employment Contributions Act (SECA):

...religious institutions receive revenue through personal and corporate donations, fund-raisers, volunteer labor, direct subsidies, and corporate profits. Donations result in tax deductions for those making the donations. Religions do not pay income, property, investment, or sales tax. Ministers can opt out of SECA and receive a parsonage exemption. We estimated the subsidies from the federal and state governments in not charging religions the equivalent of corporate income tax but were unable to come up with an accurate estimate of the subsidy from local governments. We also did not estimate the subsidy to donors through tax deductions. We estimated the subsidy to religions from not paying investment or property taxes but not the subsidy from not paying sales taxes. We estimated the subsidy from the parsonage exemption but not from the SECA exemption. And we included the direct subsidy to religions from the Office of Faith-Based Initiatives. Our calculations are summarized in Table 1. Given our inability to estimate some of the subsidies, we are fairly confident that our estimates are on the conservative end of the subsidies provided to religions by governments in the United States.

A screenshot of Table 1, with the $71 billion calculation, is below: 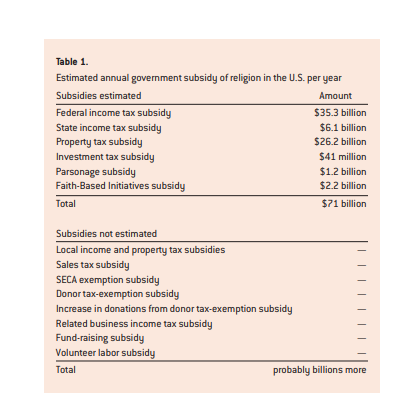 However, in an email to Lead Stories on July 15, 2021, the leader of the research team, Cragun, said:

The 3% claim is not derived from my research. I have no source for that and, frankly, don't believe it is at all accurate.

[The Tax Foundation has] not produced an independent estimate of the value of religious exemptions in the tax code, but $71 billion in lost revenue across federal, state, and local governments due to income tax exemptions, property tax exemptions, and charitable deductions sounds reasonable. To put that in perspective, the federal charitable deduction in 2018 reduced federal revenue alone by about $42 billion, with some portion of that being giving related to religious activity.

However, the claim that "if the church paid taxes, everyone would pay 3% taxes" is definitely false. The federal individual income tax, for example, will raise about $2 trillion in revenue in 2021, with most of that revenue disappearing under a 3% flat income tax. Governments would have to be losing well over $1 trillion or $1.5 trillion in revenue each year from religious institutions if that claim were anywhere close to true, and that is not the case.

Lead Stories previously debunked a claim about megachurch pastor and televangelist Joel Osteen and questions about his taxes.