Is a solar storm coming to Earth, so dangerous that it could impact GPS, the internet and satellites? No, that's not true: a solar storm has already come -- on July 3, 2021, -- and gone, according to NASA. It did briefly impact radio communications over the Atlantic Ocean, but there is no incoming solar storm as of this writing.

Long story short is that an X1.5 rated solar flare occurred on July 3, but the effects of the flare are already long past (light takes 8 minutes to reach Earth from the Sun, and that's what would cause any effects on Earth).

NASA explains solar flares -- "... giant explosions on the sun that send energy, light and high speed particles into space" -- and what it means for a solar flare to be rated X-Class (the most powerful of NASA's five classes of solar flares) here.

As for the July 3 solar flare, the NASA spokesperson added:

The flare led to a momentary radio blackout over the Atlantic ocean on the 3rd, causing some disturbance to those who use those radio signals. But that's now long past and there is no forthcoming solar storm ...

... Here is a snapshot from a NOAA Space Weather Prediction Center post. The red area was the most sunward facing part of the Earth and most lit up by the flare. This plot shows where radio in the Megahertz range is absorbed by the temporarily changing atmosphere. These frequencies are most used by Ham radio, commercial airlines, emergency management and defense. 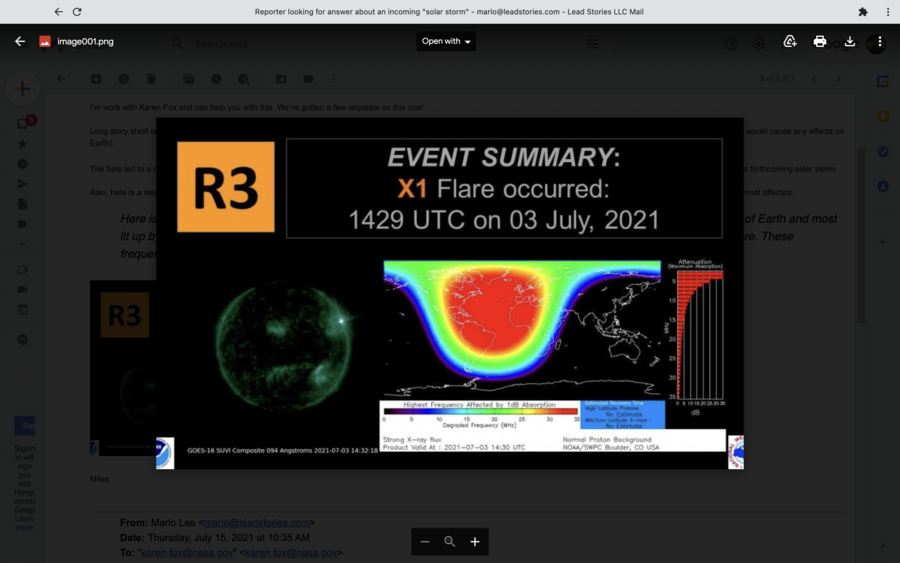