Did the highest flood to ever happen in the German town of Bad Schandau happen over a century ago? No, that's not true: The highest flood in Bad Schandau happened on August 16, 2002 -- the flood water rose a few centimeters higher than it had in the Saxon Flood of 1845. A photo of the building with dates and high water levels marking floods over the centuries omits the two highest marks of the town's historic floods.

For all those folks blaming "unprecedented" flooding in Germany on global warming, consider this photo, taken in May of this year in Bad Schandau, which has a history to that of the hardest-hit regions. It shows the height of various floods over the years. Note that the largest happened a long time ago.
The Earth is a big place, and some kind of weather-related disaster happens somewhere on it pretty much every blessed day.

A June 6, 2007 photo of this building is included in Wikipedia's Creative Commons and appears in an article about the Elbe Floods in 1845. Lead Stories made a comparison image by cropping the Wikipedia image and aligning the flood markings with those pictured in the Facebook post. Merging the two photos to scale so that it is possible to see all the high water markings including the marks from 2002 and 1845. The Facebook photo appears to show two additional marks, added lower on the wall since the 2007 photo was taken, these are 1897 and 2010. 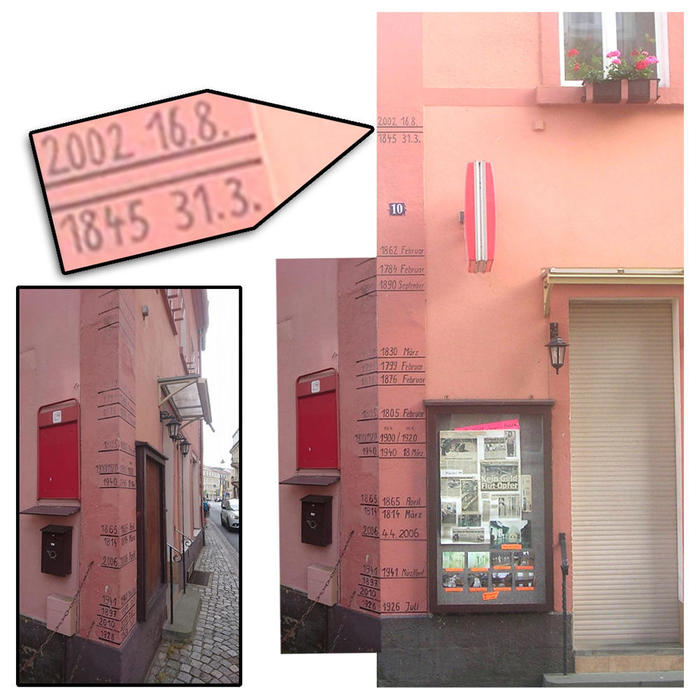 The flood of 1845, known as the Saxon Flood, happened after an unusually cold winter with deep accumulated snow and frozen rivers. When the spring thaw came suddenly at the end of March, it resulted in a tremendous flood of the Elbe river in the city of Dresden as well as other river towns such as Bad Schandau. The summertime flood which occurred in August of 2002 was the result of widespread heavy rainfall.

A program by Sachsen Spiegel Extra shows, at about the 19:20 mark on the video timeline, a view from a boat of the first stories of the buildings of Bad Schandau submerged during that 2002 flood.

Although Bad Schandau in Saxony near the border of Czechoslovakia was not one of the regions in western Germany initially hit by floods on July 14 and 15, 2021, the flood catastrophe would grow to include the town when heavy rains fell on Saturday July 17, 2021.