Does a 2019 Centers for Disease Control and Prevention (CDC) guideline for treatment of refugees "blow a hole" in the widely reported warnings against use of veterinary ivermectin to treat COVID-19? No, that's not true: The human formulation of the drug is specifically intended to kill worms and other harmful parasites, which is why the CDC in 2019 urged ivermectin be administered to refugees from developing nations being resettled to the U.S. The phrase "just a horse treatment" from the headline with the claim does not appear to have been used in any news media coverage of the warnings. The warnings followed summer of 2021 reports of calls to poison control centers from people who took the farm-store variety of ivermectin and fell ill.

The claim about the CDC guidelines for refugees has circulated on social media linking to this September 2, 2021, article published by Becker News titled "2019 CDC Memo on Ivermectin Blows a Hole in Media's Narrative It's Just a 'Horse Treatment'" (archived here) which opened:

"People are purchasing various highly concentrated animal ivermectin drug formulations such as 'pour-on,' injectable, paste and 'drench' that are intended for horses, cattle and sheep"...

"People are purchasing various highly concentrated animal ivermectin drug formulations such as 'pour-on,' injectable, paste and 'drench' that are intended for horses, cattle and sheep"...

The Becker News article details podcast personality Joe Rogan's prescription of ivermectin as a treatment for COVID-19 after he was diagnosed with the infection during an August 2021 public speaking tour. The Becker News article reviews all the warnings and then quotes from an on-paper-only study of studies (not a new lab or clinical test) in which the authors looked at past research and did not declare ivermectin works, but that it appears possible it could reduce hospitalization and symptoms.

The Becker News report's headline refers to the CDC's 2019 "Guidelines for Overseas Presumptive Treatment of Strongyloidiasis, Schistosomiasis, and Soil-Transmitted Helminth Infections for Refugees Resettling to the United States,'' which encouraged doctors to administer the anti-parasitic drug to refugees coming to the U.S. from the Middle East, Asia, North Africa, Latin America, the Caribbean and sub-Saharan Africa. The guidelines discouraged giving the drug to pregnant women, breastfeeding women or to children.

The drug is a dewormer for horses and cows that is used, in much smaller doses, to treat rosacea and some parasites in humans. The Food & Drug Administration counsels doctors not to use it for prevention or treatment of COVID-19 and declares ivermectin is not an anti-viral.

The FDA's warnings about ivermectin emphasize its use for horses:

On the webpage featuring a horse and titled Why You Should Not Use Ivermectin to Treat or Prevent COVID-19, the FDA said:

The FDA has received multiple reports of patients who have required medical support and been hospitalized after self-medicating with ivermectin intended for horses ...There's a lot of misinformation around, and you may have heard that it's okay to take large doses of ivermectin. That is wrong. Even the levels of ivermectin for approved uses can interact with other medications, like blood-thinners. You can also overdose on ivermectin, which can cause nausea, vomiting, diarrhea, hypotension (low blood pressure), allergic reactions (itching and hives), dizziness, ataxia (problems with balance), seizures, coma and even death.

Merck, which makes the drug, is blunt in its advice about using ivermectin to treat COVID-19: Don't.

On its website, Merck, which could profit if the drug were proven and demand soared, discouraged use. In an August 23, 2021, email to Lead Stories, a Merck spokesperson wrote:

As our company has already indicated company scientists are carefully examining the findings of available and emerging studies of ivermectin for the treatment of COVID-19 for evidence of efficacy and safety and continue to engage with the external scientific community regarding ongoing research. It is important to note that based on our review of available data, our analysis has identified:

As for the headline's claim about a widespread media narrative, there's no evidence of anyone but Becker and anti-vaccine activists using the phrase "just a horse treatment".

In an "All" search of that phrase and the likely variant of it, Google's top results were not mainstream news reports calling ivermectin "just a horse treatment". The top results were the Becker article and websites that made a similar claim, as is shown in the screengrab that follows: 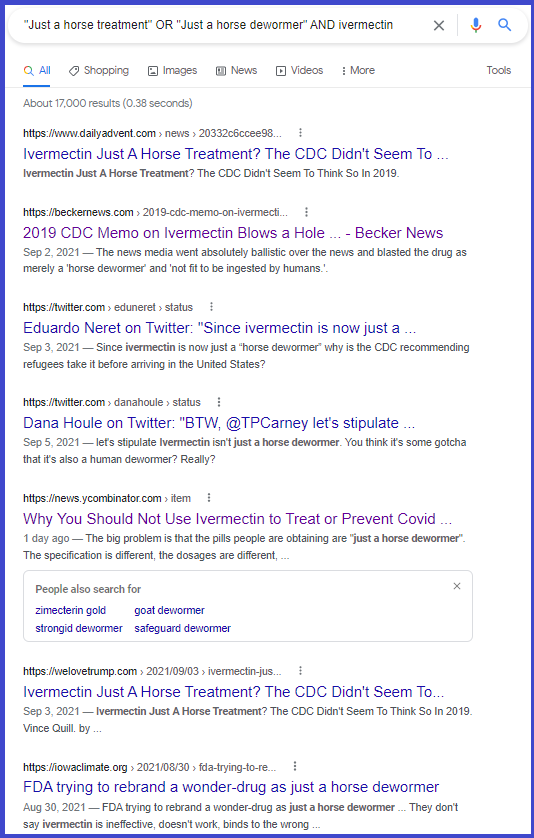 When the Google search parameters were narrowed to the "News" tab only, there were zero results showing news organizations had called ivermectin "Just a horse treatment" or dewormer. Google indexes about 50,000 news sites worldwide. The "News"-only search for "Just a horse treatment" and the likely alternative phrase is shown in the screengrab that follows: