Did 351,709 votes that had been cast to recall California Gov. Gavin Newsom mysteriously vanish during a live CNN broadcast of the California election night results when about half of the votes had been counted? No, that's not true: There was a data entry error made by a staffer of Edison Research Polling, which falsely inflated the count of the "Yes" votes temporarily. Within two minutes the error was caught and corrected.

The polls for the California recall election were open on September 14, 2021, and closed at 8 p.m. local time that night. Social media posts calling attention to the glitch in the election return numbers began to appear on September 15, 2021. One example is this post published on Facebook. It was captioned:

Watch the 'YES' numbers at the lower right drop when they refresh. Where did 351,709 votes go?!
Nothing to see here, folks. Move along...

Lead Stories reached out by email to Edison Research, a media research company that provides exit polling data and election data to the television networks, on September 15, 2021, to find out what had caused the shift in the displayed vote results. We received a prompt reply from Rob Farbman, senior vice president of Edison Research. He explained:

We had a number of vote updates in Santa Clara county throughout the night. We rely on different sources including state feeds, county feeds, and reporters hired to collect the vote in-person at the county office. One vote count called in from a reporter stationed at the Santa Clara county office at 11:19 ET accidentally had the "total vote" for the recall race in the "Yes" column giving "Yes" an extra 350,000 votes. This error was entered at 11:19pm ET and corrected 2 minutes later at 11:21pm ET when we deleted the "total vote" in for "Yes" and entered the correct "Yes" vote. The "vote drop" for "Yes" was a correction. We enter thousands of points of data and a mistake like this can be made. Fortunately it was corrected within 2 minutes.

While most of the social media posts making note of and questioning this glitch pointed to footage and screenshots of the CNN election coverage, this error would have affected any broadcaster subscribing to Edison Research services for the California recall election data. Below are images of the moment before and after the error was corrected and the number displayed for the "Yes" vote dropped from 2,225,915 to 1,874,206. (This image will open larger in a new window) 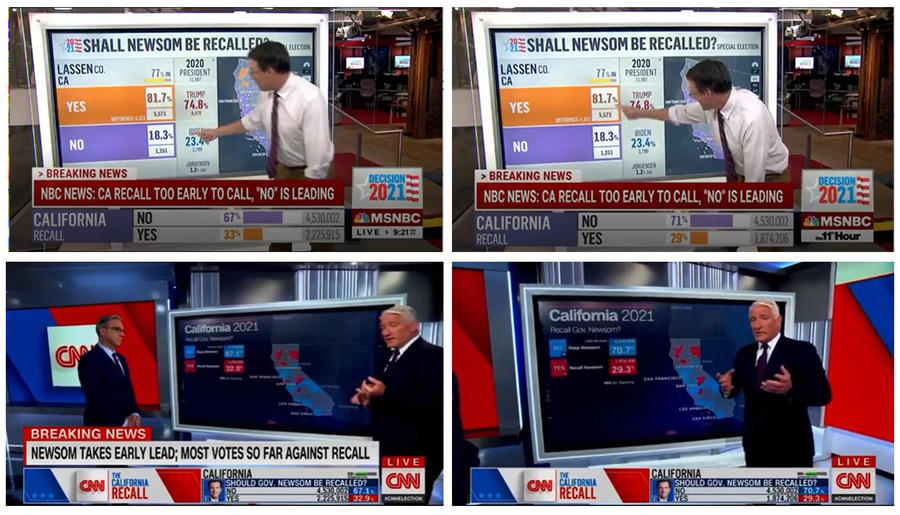 It will be several more days or even weeks before the vote count of this recall election is finalized, but Newsom was able to secure enough of the vote to keep his job.

Lead Stories wrote about a similar glitch that occurred in the live coverage of the Georgia senate runoff which took place on January 5, 2021.