Do President Joe Biden and first lady Jill Biden own 10% of Contemporary Amperex Technology Co., Ltd (CATL), a leading lithium-ion battery development and manufacturing company based in China, a country with financial interests in Afghanistan lithium? No, that's not true: According to public financial documents, the elder Bidens are not financially linked to CATL. However, because of his equity in another Chinese company, Hunter Biden, the president's son, does -- or did -- have ties to the battery company.

This is a must read. The Bidens own 10% of a Chinese lithium ion battery company whos stock has soared almost 300% since Biden was 'elected'. Afghanistans biggest mineral is lithium valued between $1 trillion to $3 trillion dollars. China was already in talks with the Taliban before Bidens Afghan debacle. China moves in and takes over the lithium market and the Bidens profit off of all of this at the expense of American lives. Its all making sense now!

For anyone interested in researching the company = Contemporary Amperex Technology Co., Limited (CATL).

CATL is the 'world's largest maker of electric vehicle batteries.'

Suck on this fact checkers... The Bidens own 10% of this Chinese Company and it's stock has gone up 62% since he has been POTUS🤔🤔🤔

The post cites no sourcing or attribution for the numbers it uses regarding purported Biden stock ownership, stock value increase or Afghanistan's lithium value.

This fact check will break down the claims made in the post one by one, documenting what is in the public record on each claim:

According to a public financial disclosure form (archived here) submitted by the president on May 17, 2021, neither he nor the first lady own a percentage of CATL. Screenshots of their assets and income from the report are included below: 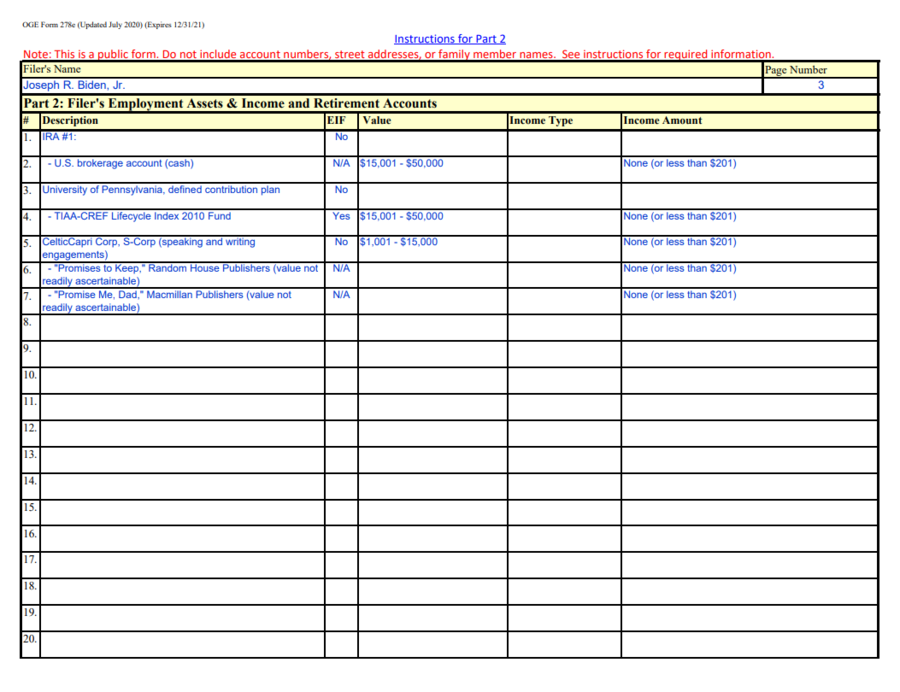 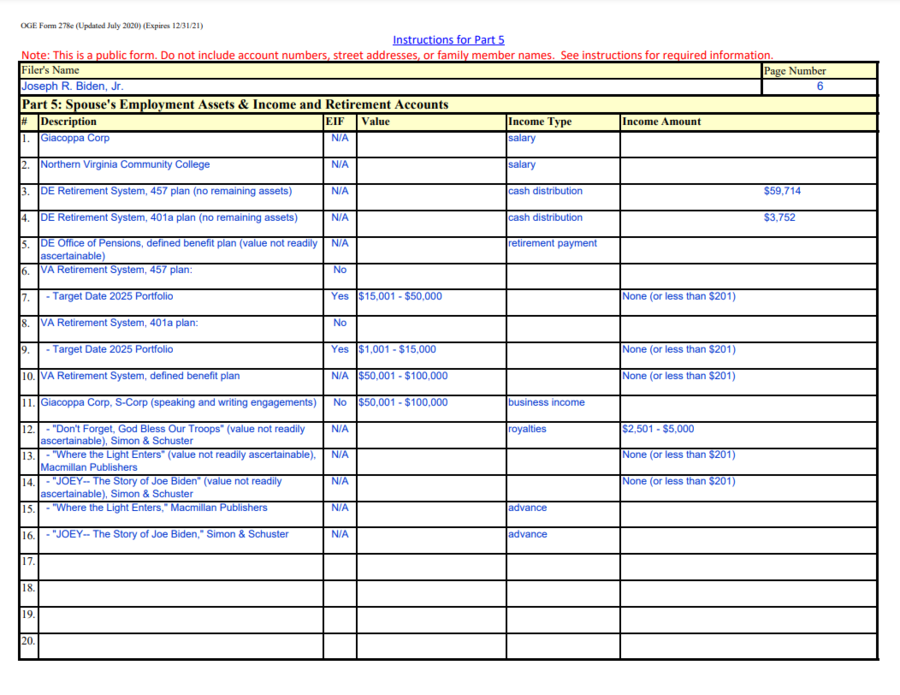 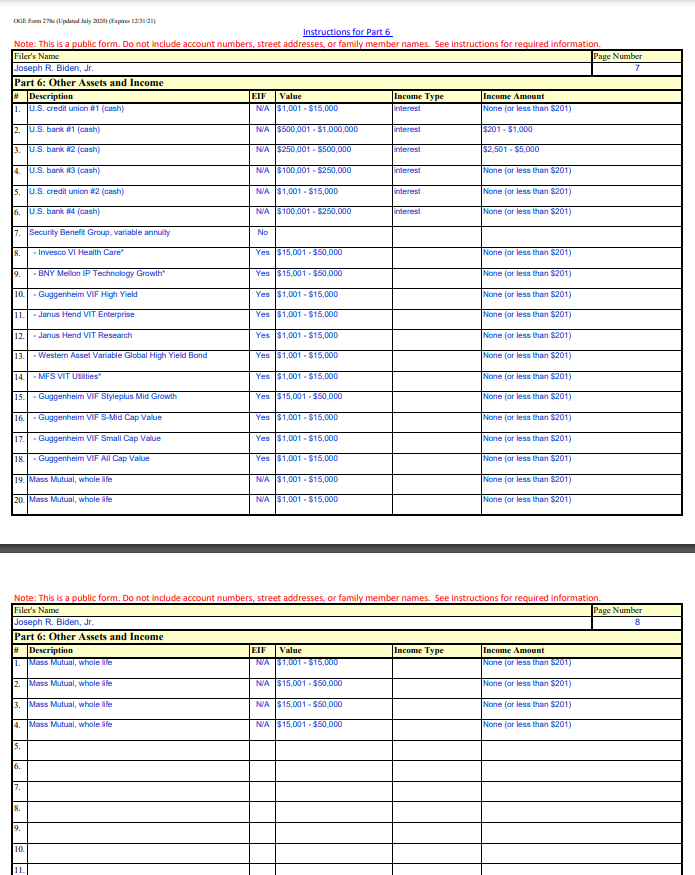 While Joe Biden holds no such shares, there are implicit conflicts of interest in the holdings of other family members. Candidate Joe Biden in 2020 reportedly warned his younger brother Frank to "watch [him]self" over any possible business dealings. And Hunter Biden is the subject of a federal investigation into his tax affairs.

Hunter Biden held a 10% equity stake in BHR Partners, a Chinese private equity firm that is reported to be a CATL shareholder.

On October 13, 2019, Hunter Biden's lawyer George Mesires published a statement on behalf of his client claiming:

To date, Hunter has not received any compensation for being on BHR's board of directors. He has not received any return on his investment; there have been no distributions to BHR shareholders since Hunter obtained his equity interest. Moreover, Hunter played no role in directing or making BHR's investments. Hunter intends to resign from the BHR board of directors on or by October 31, 2019.

During a press conference on February 5, 2021, White House Press Secretary Jen Psaki said that Hunter Biden was in the process of "working to unwind his investment" from the firm.

CATL's stock price did not rise 300% since Joe Biden was elected.

According to Morningstar, CATL's stock price rose 86.92% between November 9, 2020 -- the first day the market was open following November 7, 2020, the day Biden became president-elect -- and the time of this writing. The highest stock increase in that period was on August 4, 2021, when it hit a 113.57% increase. A screenshot of the company's stock price chart is included below:

Between the time Biden was inaugurated on January 20, 2021, and the time of this writing, CATL's stock price rose 27.24%, not the 62% the user who posted this claim on Facebook stated. Again, the highest stock increase in that period was on August 4, 2021, when it hit a 45.37% increase. A screenshot of the company's stock price change is included below:

Readers can replicate these charts by clicking on "Show Full Chart" here.

Although previous reports from the U.S. have claimed that Afghanistan is rich in lithium and other minerals, there is no evidence that lithium is the country's "biggest mineral." There is no mention of lithium in the summary table of commodities in a report from Afghanistan's Ministry of Mines and Petroleum published in 2019. Further, a report from the U.S. Geological Survey titled "The Mineral Industry of Afghanistan, 2017-18" did not enumerate the value of Afghanistan's lithium reserves at that time.

The New York Times in 2010 reported U.S. officials discovered approximately $1 trillion worth of untapped mineral deposits in Afghanistan, including what the report said was potentially the world's largest lithium deposits.

Claim: China was already in talks with the Taliban before Bidens "Afghan debacle"

China did engage in talks with the Taliban about relations between the two countries before the U.S. completely pulled out of Afghanistan. However, while insiders predict that China will attempt to use Afghanistan's wealth of minerals to its advantage, China's specific financial interests in Afghanistan have yet to be revealed.