Did U.S. Border Patrol agents use whips to round up Haitian migrants and refugees who were crossing a river at the Mexican border near Del Rio, Texas? No, that's not true: While photos and video circulating show mounted border patrol agents aggresively attempting to turn back people trying to cross a shallow portion of the Rio Grande, it does not show them using whips. The people in the river were trying to return to the encampment under the International Bridge on the United States side of the river. Scenes clearly show some Border Patrol agents swinging something in the air, but these were not whips or lassos -- they were swinging the loose end of their split reins, a part of western riding gear used to guide the horse.

The photographed confrontations between mounted U.S. Border Patrol agents and Haitians crossing the river occured on September 19, 2021. Many posts on social media expressed outrage over the scenes such as this thread (archived here) posted to Twitter on September 20, 2021 which was captioned:

Border patrol is mounted on horseback rounding up Haitian refugees with whips. This is unfathomable cruelty towards people fleeing disaster and political ruin. The administration must stop this. 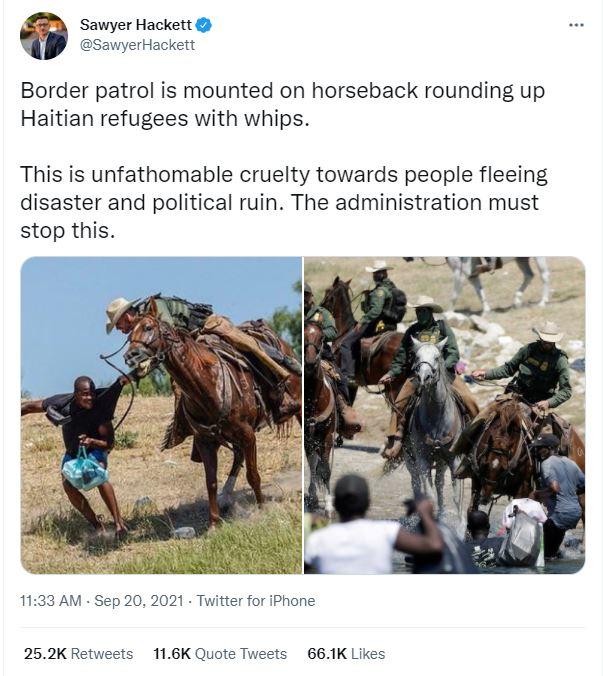 An article from elpasotimes.com on September 19, 2021, titled, "Haitian migrants face tough choices in Del Rio amid crackdown at Texas-Mexico border" contains a slideshow of images that show the mounted U.S. Border Patrol Agents facing off with the people crossing the river. Most of these people are not carrying any belongings other than plastic bags with what appears to be take-out food containers to feed more than one person. The article describes the agent swinging a whip:

As the Haitians tried to climb onto the U.S. side of the river Sunday afternoon, the agent shouted: "Let's go! Get out now! Back to Mexico!"

The agent swung his whip menacingly, charging his horse toward the men in the river who were trying to return to an encampment under the international bridge in Del Rio after buying food and water in Ciudad Acuña, Mexico.

But the photos tell a more precise story. The high-resolution photos in the El Paso Times article slideshow clearly show the western riding style of split reins, which have been mischaracterized in articles and social media posts as a whip. These leather reins are each about 7 to 8 feet in length and attach to the bit in the horse's mouth. The advantage for wildland riders is that they don't snag in thick brush the way a loop rein can. They can be held so both reins drape to one side on one shoulder of the horse, or they can cross and each rein hang down the opposite side of the horse. Some split reins are "weighted" with an additional layer of leather stitched on for about the last 18 inches. This is designed to make the reins drape, and the added stiffness prevents the rein ends from curling around the moving horse's legs. Some split reins are long enough that the ends hang past the horse's front knees.

On September 18, 2021, the Department of Homeland Security issued a press release that told of six changes to address the increase in migrants in Del Rio. On the list:

First, within the next 24-48 hours, U.S. Customs and Border Protection will have surged 400 agents and officers to the Del Rio sector to improve control of the area. If additional staff is needed, more will be sent. The Del Rio Port of Entry has temporarily closed, and traffic is being re-routed from Del Rio to Eagle Pass to more effectively manage resources and ensure uninterrupted flow of trade and travel.

On September 20, 2021, The Department of Homeland Security posted a statement in five consecutive tweets:

The Department of Homeland Security does not tolerate the abuse of migrants in our custody and we take these allegations very seriously.
U.S. Customs and Border Protection's Office of Professional Responsibility is investigating the matter and has alerted the DHS Office of Inspector General.
In addition, Secretary Mayorkas has directed that personnel from the Office of Professional Responsibility be on site full-time to ensure that the responsibilities of DHS personnel are executed consistent with applicable policies and training and the Department's values.
Secretary Mayorkas visited Del Rio today and witnessed the extraordinary work of DHS personnel. The footage is extremely troubling and the facts learned from the full investigation, which will be conducted swiftly, will define the appropriate disciplinary actions to be taken.
We are committed to processing migrants in a safe, orderly, and humane way. We can and must do this in a way that ensures the safety and dignity of migrants.

After viewing the footage, DHS provided the following statement: 'DHS does not tolerate the abuse of migrants in our custody and we take these allegations very seriously.'

U.S. Secretary of Homeland Security Alejandro Mayorkas was in Del Rio, Texas, at a press conference on September 20, 2021. On the afternoon of September 21, 2021, he posted a video to his Twitter account in which he responded to questions posed to him earlier in the day by Sen. Gary Peters, D-Michigan, during a Senate Committee Hearing in Washington D.C. When asked about them, Mayorkas said he was horrified to see the images.

We do not tolerate any mistreatment or abuse of a migrant. Period.

The images that we saw do not speak of the incredible men and women of @CBP or the @DHSgov as an institution. pic.twitter.com/ra0YnqVd5S