Did John Gruden make statements about poor kids, people with Indian accents and the "first mainstream African-American"? No, that's not true: Four statements attributed to ex-NFL football coach John Gruden were not made by him but by Joe Biden over the years, all of which were reported by national news outlets. 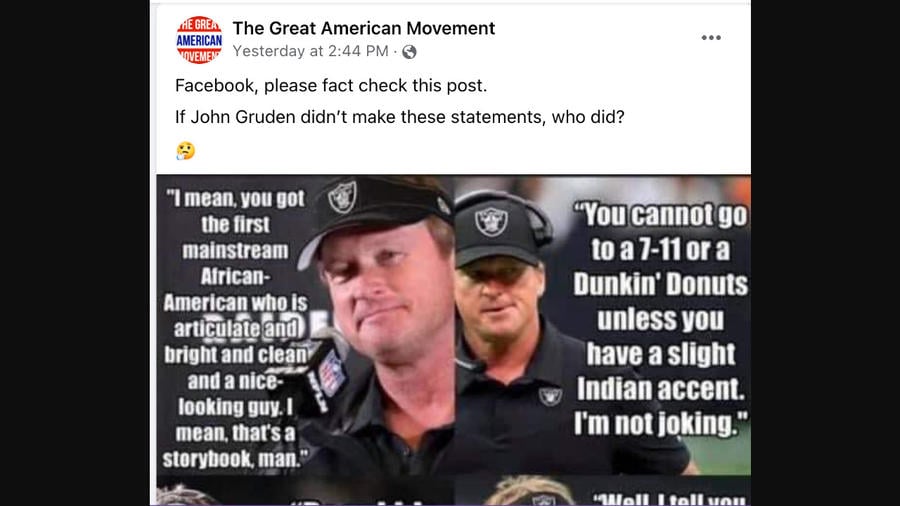 The post has four images of Gruden, the former head coach of the Oakland Raiders who resigned when racist, homophobic and sexist emails he sent were published by the New York Times. In each image is a quote, none of which he made -- all four were comments Biden made.

We break down each quote here:

"I mean, you got the first mainstream African-American he was articulate and bright and clean and a nice-looking guy. I mean, that's a storybook, man."

Biden made these remarks in January 2007 during the primary race against Barack Obama and they were recorded by a New York Observer reporter, NBC News reported.

Biden told reporters on a conference call at the time that he had spoken to Obama to clarify his remarks, explaining he felt no ill-will toward his fellow senator.

'This is a guy who's come along in a way that's captured the imagination of the country in a way that no one else has. That was the point of everything I was saying,' Biden said.
But late Wednesday, Obama released a statement seizing on Biden's use of the word 'articulate.'
'I didn't take Sen. Biden's comments personally, but obviously they were historically inaccurate,' Obama said. 'African-American presidential candidates like Jesse Jackson, Shirley Chisholm, Carol Moseley Braun and Al Sharpton gave a voice to many important issues through their campaigns, and no one would call them inarticulate.'

In 2008 Biden became Obama's running mate and they were elected to the White House in the November election.

"Poor kids are just as bright and just as talented as white kids."

Biden made these comments in August 2019 when he was running for the 2020 Democratic presidential nomination. He was attending a town hall with the Asian and Latino Coalition in Des Moines, Iowa, NBC News reported.

Here is a video of his remarks where he said:

'We have this notion that somehow if you're poor, you cannot do it. Poor kids are just as bright and just as talented as white kids. Wealthy kids, black kids, Asian kids. No, I really mean it, but think how we think about it.'

"You cannot go to a 7-Eleven or a Dunkin' Donuts unless you have a slight Indian accent, I'm not joking."

Biden made these remarks in July 2006 on the C-SPAN series "Road to the White House," CBS News reported:

'I've had a great relationship. In Delaware, the largest growth in population is Indian-Americans moving from India. You cannot go to a 7-Eleven or a Dunkin' Donuts unless you have a slight Indian accent. I'm not joking.'

Biden was a U.S. senator at the time, and his office released a statement about his comments, NBC News reported:

'The point Senator Biden was making is that there has been a vibrant Indian-American community in Delaware for decades. It has primarily been made up of engineers, scientists and physicians, but more recently, middle-class families are moving into Delaware and purchasing family-run small businesses,' said Margaret Aitken.

'These families have greatly contributed to the vibrancy of the Indian-American community in Delaware and are making a significant contribution to the national economy as well,' she said.

"Well I tell you what, if you have a problem figuring out whether you are for me or Trump, then you ain't black."

Biden made this comment in May 2020 when he was running for the Democratic presidential nomination. He was a guest on the Charlemagne tha God radio show "The Breakfast Club."
As the interview was ending, Charlamagne invited Biden to their studio in New York City for another interview, saying, "We've got more questions," as CNN reported:

'You've got more questions?' Biden replied. 'Well I tell you what, if you have a problem figuring out whether you're for me or Trump, then you ain't black.'

Charlamagne responded, 'It don't have nothing to do with Trump. It has to do with the fact, I want something for my community.'
'Take a look at my record, man!' Biden shot back.

Biden apologized for his comments on a call with the U.S. Black Chamber of Commerce:

'The bottom line of all of this perhaps I was much too cavalier. I know that the comments have come off like I was taking the African American vote for granted but nothing could be further from the truth. I've never, ever done that and I've earned it every time I've run. I was making the point that I never take the vote for granted and in fact I know in order to win the presidency, I need the African American vote. I shouldn't have been such a wise guy. I shouldn't have been so cavalier.'