Did Joe Biden have "one of his most disturbing moments to date" when, during Veterans Day remarks at Arlington Cemetery, he referred to Satchel Paige as "the great Negro"? Was Biden being racially insensitive, deliberately using an outdated term pejoratively? No, that's not true: Biden, who has been open about his struggles overcoming a stutter in childhood, stumbled in introducing an anecdote about the pitcher Satchel Paige. It is true that Biden did say the words, "I've adopted the attitude of the great Negro..." but as he continued to sort the sentence, it was clear that he broke up "Negro Leagues" with a parenthetical stumble. He was prefacing a quote attributed to Paige, a pitcher in the Negro Leagues who went on to be a Hall of Famer in the pros.

President Biden's remarks were delivered at a Veterans Day ceremony at Arlington National Cemetery. Several outlets drew attention to the inapt phrasing. "Fox & Friends" aired a video clip that had been edited to remove Biden's corrective phrasing about the Negro Leagues. One example of such social media content is this short video published by "The Joe Padula Show" on November 11, 2021. It was captioned:

"The Great Negro" says Joe Biden about Satchel Page.
I'm sure it's just another screw up, but could ya imagine if any Republican made the same mistake? Let The Others Know...
#LetsGoBrandon 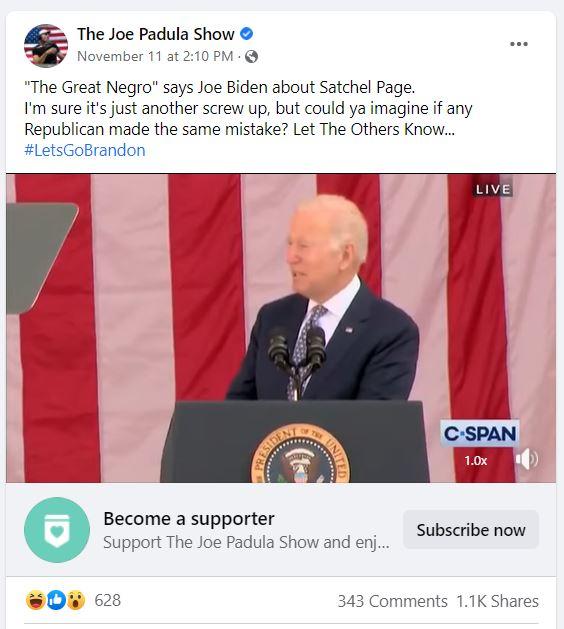 Below is a clip taken from the November 11, 2021, C-Span coverage of the Veterans Day ceremony at Arlington National Cemetery. This shows the short portion of Biden's remarks wishing a happy birthday to Ambassador Donald Blinken, who served in the Army Air Corps during World War II. The point of the birthday message was that a person is only as old as they feel. Biden begins to tell the anecdote about Satchel Paige at about 0:23 seconds into this embedded clip. This fact check does not extend to the question of the accuracy of this anecdote and quote attributed to Satchel Paige.

The exact words Biden uttered were:

And I just want to tell you, I know you're a little younger than I am, but, you know, I've adopted the attitude of the great Negro -- at the time, pitcher in the Negro Leagues -- went on to become a great pitcher in the pros -- in the Major League Baseball after Jackie Robinson. His name was Satchel Paige.

Fox News used clips of the remarks both with and without editing. On "Hannity" on November 11, 2021, an unedited clip was used, with Hannity introducing the clip of Biden's remarks as, "One of his most disturbing troubling moments to date." On "Fox & Friends," the chyron read, "BIDEN FACES BACKLASH FOR SATCHEL PAIGE REFERENCE." Biden's self-correcting words were edited out of this clip. This edit resulted in a glitch in the video footage of Biden at the lectern. After saying, "I've adopted the attitude of the great Negro at the time, pitcher..." Biden's upheld hand vanishes inexplicably before the clip picks up again with, "...name was Satchel Paige." Cut from the footage were the words "...in the Negro Leagues -- went on to become a great pitcher in the pros -- in the Major League Baseball after Jackie Robinson. His..." Lead Stories was unable to locate a copy of the edited clip on the Fox website or Fox YouTube channel. Embedded below is a portion of the clip edited by Fox as it appeared in the morning broadcast on November 12, 2021 and posted by @atrupar on Twitter the same day:

Then this morning Fox & Friends opted for full-frontal dishonesty, deceptively editing Biden's remarks to exclude his mention of the negro leagues and make what he said seem racially insensitive. Shameless lying. pic.twitter.com/dbbTtPhFnR