Is there an audio feed that can be accessed via telephone for Ghislaine Maxwell's trial since the trial will not be televised? No, that's not true: "No, no dial-in for the trial," the public information officer for the U.S. attorney's office in the Southern District of New York told Lead Stories. The number and access code in the post was shared by the Department of Justice for attorneys to use for a pre-trial hearing. Federal courts prohibits live broadcasting of trials, as Lead Stories previously reported here.

The claim appeared as a post (archived here) where it was published on Facebook on November 29, 2021. It opened:

Since the G Maxwell case that starts monday is not televised you can call this number to listen to the audio. (Broadcasting official federal court cases is illegal.) 844 721 7237 use access code 9991787.

Social media users saw this at the time this fact check was written:

The post had an image of Maxwell with the text:

James Margolin, chief public information officer, U.S. attorney's office in the Southern District of New York, told Lead Stories via email on November 29, 2021, that the number does not provide audio access to the trial. "No, no dial-in for the trial," he confirmed.

The number and access code listed are from an October 2021 hearing as the Justice Department website notes: 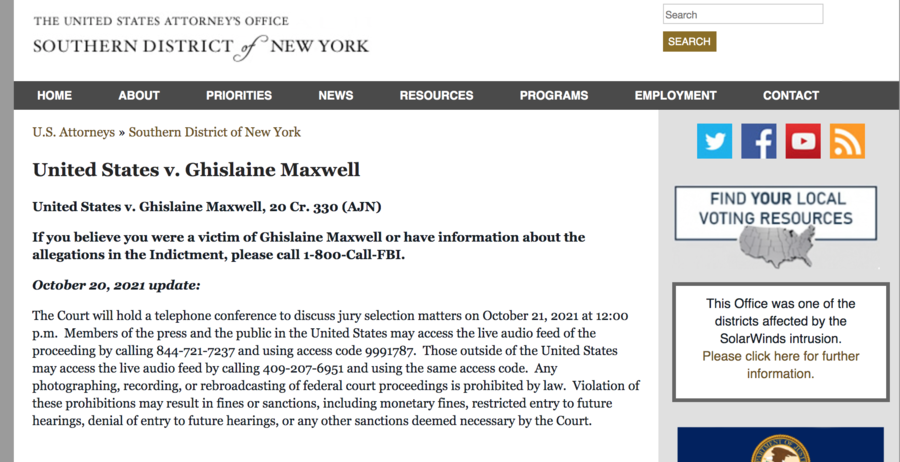 Lead Stories previously reported on Maxwell's trial being held in the United States District Court for the Southern District of New York. The restrictions on cameras in the courtroom applies throughout the federal court system, except in districts that are testing it out. The federal court trial for Maxwell, who was multi-millionaire pedophile Jeffrey Epstein's girlfriend and alleged co-conspirator, came under the federal prohibition against cameras in the courtroom. Opening statements in her trial were scheduled to begin on November 29, 2021.