Did an experiment comparing the effect soaking eggs in various beverages had on their eggshells provide conclusive evidence about aspartame or other sugar substitutes and whether they were unhealthy? No, that's not true: While this at-home experiment did show a dramatic change to one of the eggs -- the one exposed to a sugar-free drink mix -- the design of this experiment doesn't point to clear conclusions at this point. Due to the lack of controls, a specific ingredient in the sugar-free drink mix can't be identified as the cause of the change to the eggshell. More testing would be needed. This eggshell experiment can provide information about how eggshells react in certain liquids, but this does not necessarily point to any conclusions about human health.

The original post with the photos of the eggs appears to have gone viral on Facebook in mid-November 2021. Although the original post is now gone, photos continue to circulate with copy/paste text. One example is a Facebook post published on November 23, 2021. The copied text reads:

Shared from a homeschool page! : '

yep this is why I won't let my kids have sugar free stuff .
Found out it has aspartame.

I thought I had found something good for them

Credit for the experiment goes to our amazing Nanny/Babysitter Crystal Meredith Nellis. She's the best!' 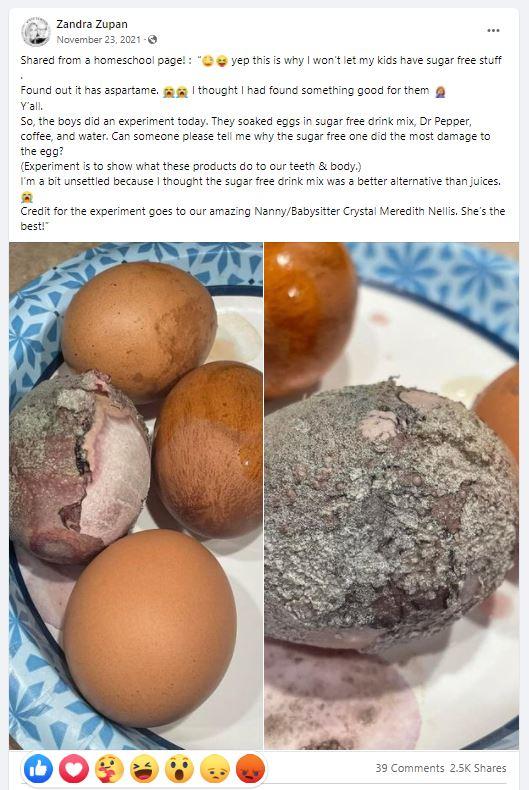 The focus of this fact check is the design of the eggshell experiment and the conclusions, not the safety of aspartame or sugar substitutes. The FDA's fact sheet on high-intensity sweeteners permitted for use in food in the United States lists aspartame as safe for the general population. Some people have difficulty metabolizing a component in aspartame, phenylalanine, and for this reason foods with this sweetener must be labeled that they contain phenylalanine.

Some editions of this Facebook post feature identification labels on the eggs, and additional captioning that suggests sugar-free is unhealthy:

This is such a HUGE misconception in our society because it's what's been marketed to us for soooo long!
I literally was just in the grocery store the other day and a man told his son 'no' to a certain candy he picked out. The little boy was upset 'but it says sugar free dad'. He proceeded to explain that even though it said that, it doesn't make it better for you because it's full of other bad ingredients.

The caption of the viral post says that the "most damaged egg" was soaked in a "sugar free drink mix" that contained aspartame. Then, without identifying the other ingredients of the drink mix, it is declared that this experiment shows what these products (presumably meaning sugar-free products) do to our teeth and body.

On December 3, 2021, the Facebook page Food Science Babe published a rebuttal video titled, "Humans Are Not Made Of Eggshells." The post was captioned:

Do fun experiments with kids and teach them how to properly test a hypothesis.

Do not misinterpret the experiment to post online about an ingredient you don't understand.
This does the exact opposite of teaching kids about how the scientific method works.

This video provides a clue about a detail Lead Stories could not confirm: What was in that drink mix? The video relays that it was divulged in the comments of the original post that the sugar-free drink mix used in the experiment was the Raspberry Lemonade flavor of the Aldi brand Fit & Active drink mix. The first ingredient listed in this mix is citric acid. Depending on how concentrated the mix was made, this could have resulted in a very acidic liquid to soak the egg.
Another science-minded person who saw the viral post decided to conduct their own experiment and posted their findings on Facebook on December 12, 2021. The liquids and sweeteners they soaked the eggs in and tested on pH strips were: water, Coke, Crystal Light, pure citric acid, Whole Earth sweetener and Equal, a sweetener containing aspartame. Like the Fit & Active drink mix of the original experiment, the raspberry lemonade Crystal Light in this experiment also lists citric acid as its first ingredient and is sweetened with aspartame. In this experiment the eggs exposed to Crystal Light and pure citric acid showed dramatic changes but the eggs exposed to the sugar substitutes did not. These findings seem to point to the citric acid in the drink mix, and not the aspartame, as the ingredient responsible for dissolving the eggshell although all other ingredients in the drink mix were not ruled out. 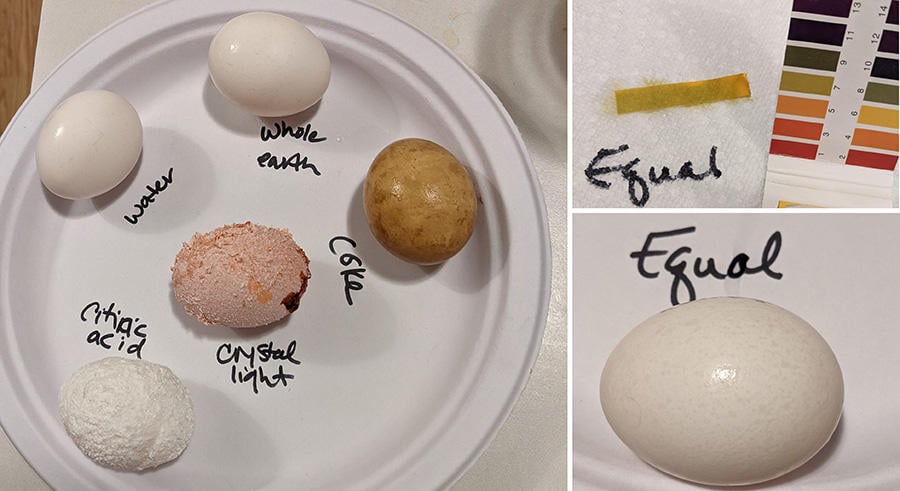 Eggshells are composed mostly of calcium carbonate while tooth enamel is calcium phosphate. A 2008 study published in Nutrition Research titled, "Acidic beverages increase the risk of in vitro tooth erosion" compared the erosion caused by various acidic beverages on actual human teeth in vitro. This study found that pH was not the only factor predicting the erosive potential of certain beverages. Diet Coke (which is sweetened with aspartame) is less erosive to tooth enamel than Coke, it said: