Did CNN publish tweets claiming that a CNN journalist killed in Afghanistan by the Taliban in 2021 is the same person who was the first American casualty in the ongoing conflict between Russia and Ukraine? No, that's not true: The tweets were published by parody accounts with no relation to CNN's official Twitter accounts. Plus, the "victim" mentioned in the tweets -- named "Bernie Gores" -- is a made-up individual who is depicted using pictures of a popular video game streamer.

The claim appeared in a Facebook post (archived here) on February 25, 2022. The post featured two screenshots of tweets from the unverified accounts "CNN Ukraine" (@CNNUKR) and "CNN Afghanistan" (@CNNAfghan). Both tweets used an identical picture of a smiling man and claimed that he was a victim of disputes in Ukraine and Afghanistan, respectively. The caption of the post read:

Wow!!
The same person that was 'executed' by the Taliban in Afghanistan-
Is also the FiRST American casualty in the 'Ukraine Crisis.'
See how that works?
CNN is the enemy of the people.
Why lie?
Go ahead and look at ALL the fact check sites saying these tweets never came from CNN, I found the original tweets FROM CNN and captured them.
Staaaaahp 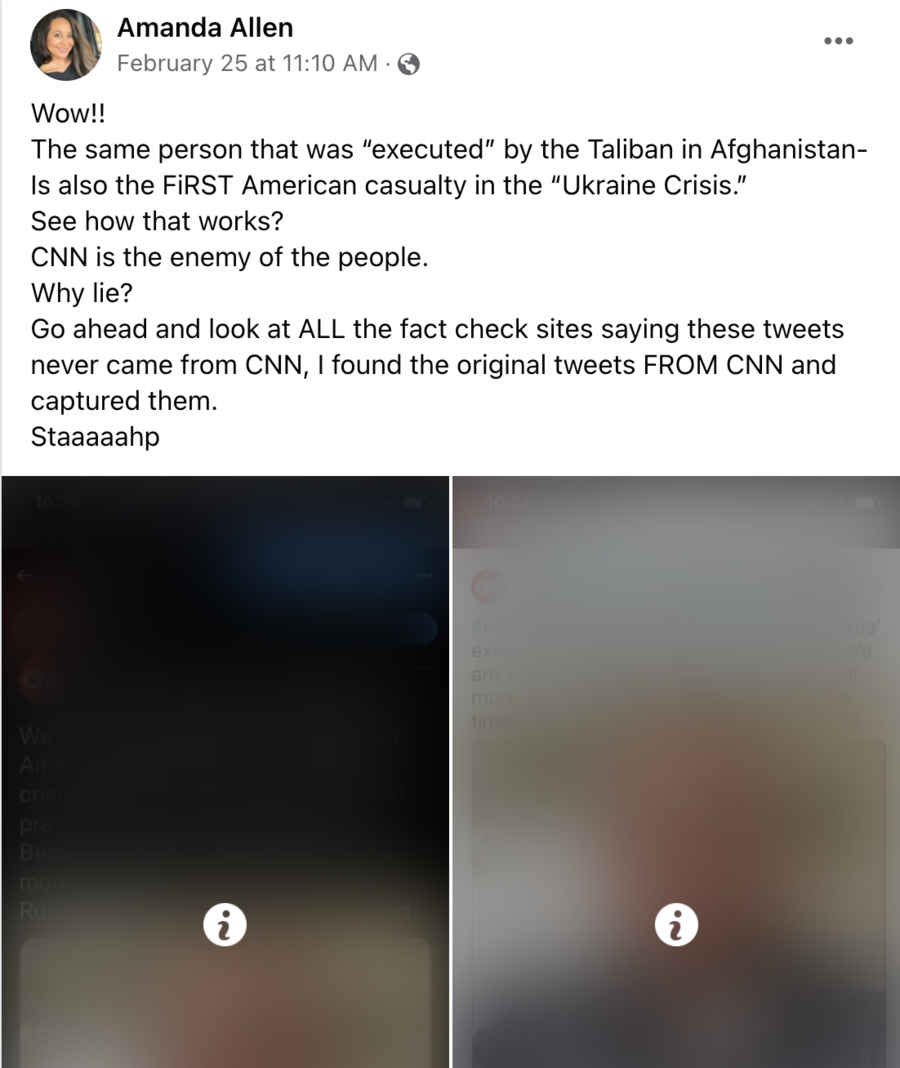 Lead Stories previously debunked the claim that "Bernie Gores" was a CNN journalist executed in Afghanistan. We found that the image used to depict Gores was actually of Jordie Jordan, a video game streamer whose image has repeatedly been co-opted for use as the fictional Gores. The alleged origin of the "joke" is explained in this tweet (archived here) that is also embedded below:

I can't stop laughing. Someone sent a photo of WingsOfRedemption to an Instagram page with 60k followers dedicated to posting photos of missing Beirut explosion victims... and they said his name was BERNIE GORES 😭😭😭 #wingsofredemption #Beirut #trolls pic.twitter.com/8QPVRuB7YF

The claim about Gores and Ukraine follows a similar format.

Twitter accounts @CNNUKR and @CNNAfghan are suspended at the time of writing:

The screenshots included in the Facebook post do not show that the Twitter accounts were verified; verification is indicated by a blue checkmark next to the account name. The accounts officially associated with CNN are verified. CNN is headquartered in the United States, but international news published by CNN on Twitter can be found on its account "CNN International" (@cnni).