Did Queen Elizabeth pass away as reported by Hollywood Unlocked? No, that's not true: This is a baseless claim from one American entertainment blog that was published two days after Buckingham Palace announced that Queen Elizabeth II had tested positive for COVID-19 and that she was "experiencing mild, coldlike symptoms." A plan called "Operation London Bridge" has been in place for many years regarding what will happen after the queen dies, including how the news of her death will be relayed and when that news will ultimately be conveyed to the press and the public. There is no evidence that this report from Hollywood Unlocked is based in fact.

The claim by Hollywood Unlocked was posted on hollywoodunlocked.com, on Facebook and on Instagram on February 22, 2022, under the title "HU EXCLUSIVE: QUEEN ELIZABETH DEAD." It opened:

Source close to the Royal kingdom notified us exclusively that Queen Elizabeth has passed away. She was scheduled to attend the wedding of British Vogue editor Edward Enninful, but was found dead. Story developing. 🙏🏾❤️📸: Getty Images 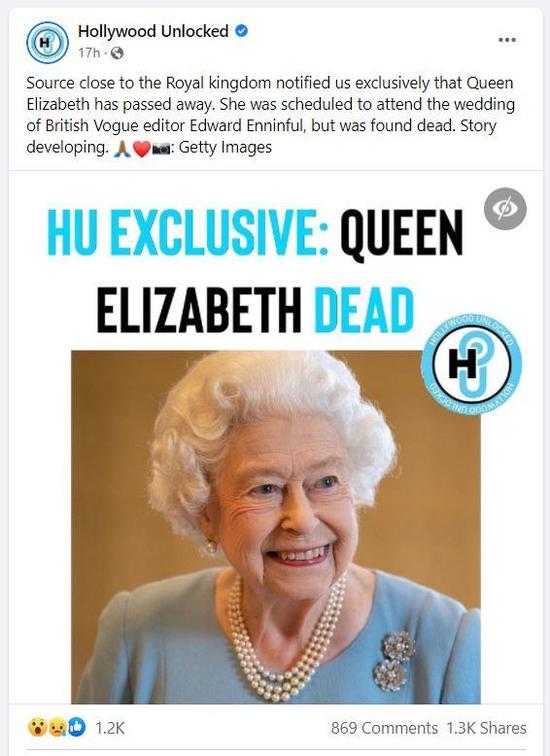 The story of this "exclusive" (and uncorroborated) claim from Hollywood Unlocked was further complicated when a retraction was published (now deleted but archived here) on February 23, 2022, by a Twitter account called @HollywoodUL. It said:

Our deepest apologies goes out to the #RoyalFamily and all involved in this embarrassing situation. It was an accident and we're working hard to make sure that this mistake never happens again. The intern journalist was misinformed and published the draft post by mistake. - HU

The founder and CEO of Hollywood Unlocked, Jason Lee, claims that this retraction was posted by a fake account. In tweets on February 22 and 23, 2022 (here and here), he wrote:

We don't post lies and I always stand by my sources. Waiting for an official statement from the palace.

Woke up to some fake account posting a retraction. We do not know that account and we have not retracted our story. There has yet to be an official statement from the Palace. Staying tuned.

An extensive article titled, "'London Bridge is down': the secret plan for the days after the Queen's death" was published in theguardian.com on March 17, 2017. This plan provides for heads of state to learn the news first:

For Elizabeth II, the plan for what happens next is known as 'London Bridge.' The prime minister will be woken, if she is not already awake, and civil servants will say 'London Bridge is down' on secure lines. From the Foreign Office's Global Response Centre, at an undisclosed location in the capital, the news will go out to the 15 governments outside the UK where the Queen is also the head of state, and the 36 other nations of the Commonwealth for whom she has served as a symbolic figurehead - a face familiar in dreams and the untidy drawings of a billion schoolchildren - since the dawn of the atomic age.

When the Queen dies, the announcement will go out as a newsflash to the Press Association and the rest of the world's media simultaneously.

Lead Stories reached out to the Royal Communications Team and will update this article if necessary.