Did a video uploaded initially on TikTok by user @mihai.off show "20,000" bikers in Germany riding by the house of a 6-year-old boy with cancer? No, that's not true: While the story of a group of bikers riding past the home of a sickly German child to cheer him up is real, the video in this post displays several thousand Brazilian bikers riding alongside their president's motorcade.

The video appeared in a Facebook post (archived here) from the group Daytona Bike Week 2022 on February 18, 2022. Below the image of a group of bikers on a highway, the video opened:

In Germany, a 6 year old boy who loved Motorcycles was diagnosed with cancer. His family posted online asking if someone can ride pass their house to cheer him up. They expected 20-30 people. But in the end, nearly 20,000 bikers showed up 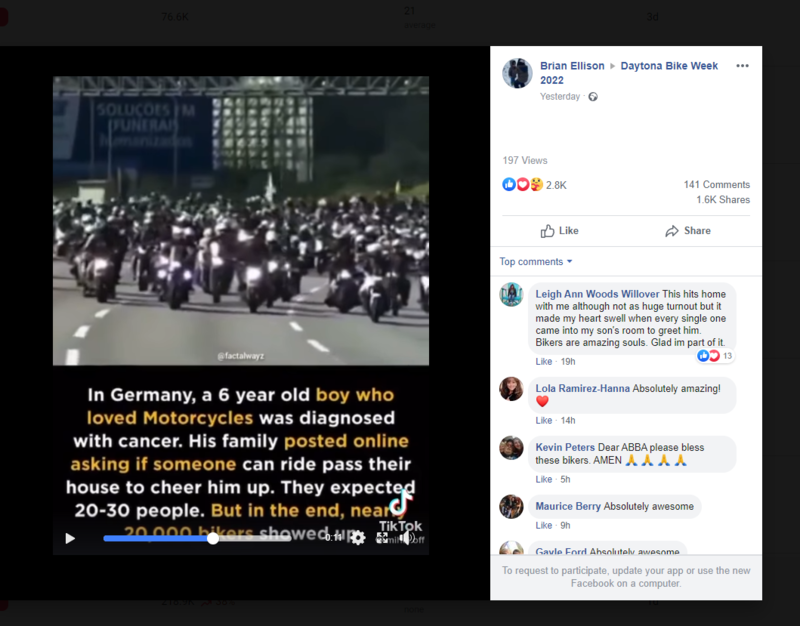 A Google search using keywords "six-year-old German boy with cancer and 20000 bikers" produced no significant results. However, it did turn up a July 31, 2021, YouTube video that shows the same video of bikers as in the post.

Not only does the video in the post show billboards not in German -- the word "soluções" at 0:21 in the video translates to "solutions" in Portuguese -- but a comment below the video reads, "This isn't in Germany, this is in Brazil, that was a bike ride with the president, to support him. Actually, he was leading the ride."

A Yandex reverse image search confirms this: It reveals a photo with the same distorted imaging of bikers on a highway with a Portuguese chyron that translates to "President Jair Bolsonaro participates in a motorcycle ride in Porto Alegre live special pampa duty." A June 18, 2021, article, "Highway cameras show motorcycle rider passing with Bolsonaro in SP; watch," shows the exact video seen in the post and reports that the government estimates 12,000 motorcycles took part.

A July 24, 2021, article titled, "15,000 bikers drive past the house of a boy with cancer" reports the true story of the 6-year-old German boy who got to see around 15,000 bikers driving by his home. The clear photos in the article do not match the distorted image seen in the video, and they fit the setting of bikers riding through a neighborhood -- not on a highway.