Is there "shocking evidence of widespread fraud" in Wisconsin's voter database? No, that's not true: Responding to a slew of allegations, Wisconsin election officials pointed out that lists of inactive voters - who are not on poll books and cannot vote - were used to inflate claims about illegal voters. Another "fraud" example was easily explained by simply looking up and finding the person with an unusual legal name whose voting record had been cited as an example of an illegitimate voter.

The claims appeared in a Facebook post (archived here) published on February 10, 2022. The post included a nearly hourlong video of a February 9, 2022 presentation to Wisconsin's Assembly Committee on Campaigns and Elections by Peter Bernegger, who leads a group of citizens looking at election data. The post reads:

Shocking Evidence of Widespread Fraud in Wisconsin's Voter Database
Grassroots activists provided incredible evidence of widespread fraud and failures in Wisconsin's voter database and its impact on the 2020 election to lawmakers on Wednesday, Feb. 9, 2022. 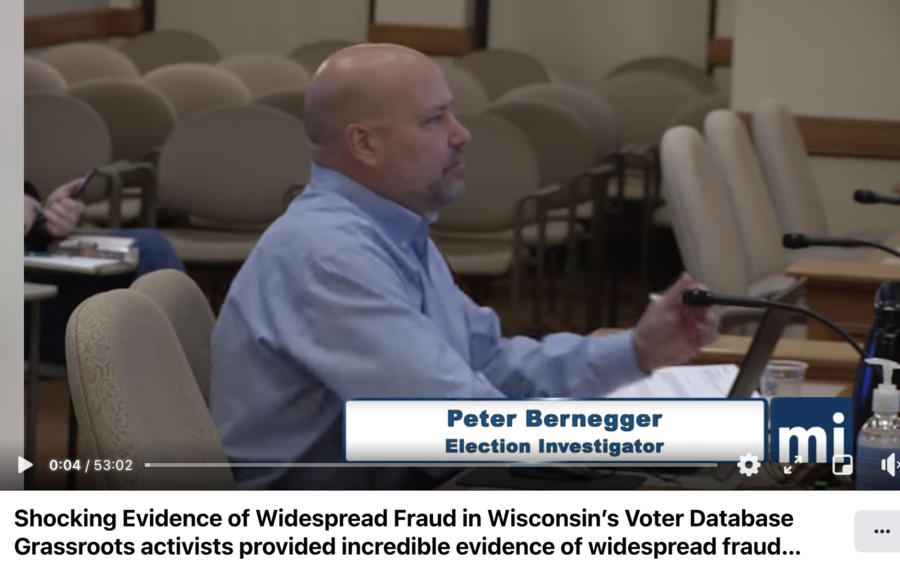 One week after Bernegger's presentation to legislators, Rob Kehoe, technology director at the Wisconsin Elections Commission (WEC) and Meagan Wolfe, administrator of the elections agency, testified in front of the same committee, debunking a number of Bernegger's allegations.

We, our group of citizens, inherently don't trust our election systems to begin with because this is the WEC website ... and you can see that the total count of registrants on here is 7.1 million registrants, and it gets to the problem that we only have 4 million adults in the state of Wisconsin.

A slide on the scene read:

That's not true. As Bernegger acknowledged later in response to a question, that 7.13 million figure represents both active and inactive voters -- and inactive voter records are not on the "voter rolls." As of February 1, 2022, Wisconsin had just 3,484,948 active registered voters.

In his prepared remarks to the committee, Kehoe explained:

In the presentation last week, we repeatedly saw inactive records presented to apparently support claims that 1.5 million illegal registrations exist or that tens of thousands of fake voters exist. But not one inactive voter is registered to vote. They are, by definition, ineligible to vote and they do not appear on poll books. Put another way: inactive voter records are not on the voter rolls.

Just before 7:00, Bernegger returned to the issue. He said:

When you have almost double the number of registrants than there are alive, active adults in the state, you start having problems.

He proceeded to talk about some of those alleged problems. At around 12:30, he put up a slide that reported 359 registered voters at "4xx9 Outer Loop Road in Somers, WI," and said:

In the case of the Outer Loop Road example, he provided just enough information that we could figure out the address because it turns out that Outer Loop Road is just 1.4 miles long and, as the name suggests, it's a loop. It's a loop that's now called University Drive. It wraps around the UW-Parkside campus and is home to their residence halls. 4019 University Drive is the school's massive apartment complex, housing single, double, and quadruple bedroom units. It is then not at all surprising that 359 people may have registered with that address.

In another example, introduced just before 18:00, Bernegger challenged the legitimacy of a ballot cast by "Ambrose Aadventure." He said the person does not exist and described the ballot as illegal.

Again, according to Kehoe, that's just not true. The technology director said:

I visited Wisconsin's public circuit court records and I typed in the name. After about 30 seconds, I found the court records of the gentleman legally changing his name. It turns out this is the legal name of a lawfully registered voter.

Kehoe spoke in depth about the procedures and protections in place to prevent the sort of fraud Bernegger described. Among them are the facts that the paper ballot record is retained and that records are subject to state certification and audits.

All of which is not to say, according to Kehoe, that the system is perfect. He pointed to an example of people registering to vote with a non-residential address, such as a UPS store, which is in violation of the requirement that voters list the address where they actually reside. He added:

I believe it is important to address questions and concerns in part to distinguish between genuine issues -- worthy of our energy to address -- and falsehoods that cause us to waste countless hours chasing ghosts. If we fail to make this distinction, then Wisconsin will have lost an opportunity to address real concerns while focusing on imaginary anxieties.

Lead Stories has written about Wisconsin voter fraud claims before. See here for a collection of those stories.