Does this compilation of video clips provide evidence of a race of shape-shifting reptilian beings who live among us? No, that's not true: This collection of videos shows an assortment of interesting video artifacts with a variety of explanations, but a shape-shifting reptilian humanoid life form is not one of them. The individuals appearing in the clips are normal people.

The videos in this collection have circulated in conspiracy circles for some time. Many are degraded from copying and bear logos from other channels where they appeared previously. This compilation video was published on Facebook by Rightherewithus on November 6, 2021, with this caption:

If it happens more than 2x it's not considered a coincidence but a pattern. So why this pattern? As Usual...

Throughout the compilation the soundtrack lacks the original audio of the videos and instead has the narrator speaking, suggesting what they think is going on. This makes it difficult for the viewer to understand the context of the original footage and to identify the videos. In all, there are 10 individual clips in this compilation. Five show video production glitches. The remaining five have a variety of explanations we will cover first.

Two of the clips show computer-generated effects of pupils changing: the green "night vision" third eyelid at 5:00 minutes and the Miley Cyrus interview with Barbara Walters at 8:00 minutes. The best resolution edition of the night vision video Lead Stories identified was posted on January 16, 2021, by @serranodavalos on 9GAG, a platform popular for sharing memes and jokes. The original Miley Cyrus interview with Barbara Walters was posted on the ABC News YouTube channel on December 19, 2013. We saw no evidence of Cyrus' pupils changing during this original copy of the interview.

At 5:19, there is a clip of German comedian Carolin Kebekus. This CGI effect appeared in the debut episode of her satire comedy show on the German public broadcasting channel Das Erste on May 21, 2020. During her monologue Kebekus' eyes momentarily flicker and appear reptilian. While screen recordings of this are circulating on YouTube, the episode is no longer posted on the daserste.de website. Comments on the web archive of the page indicate that the eye effect was visible at the time of broadcast.

Lead Stories staff in Berlin phoned the West German Broadcasting (WDR) production team of the Carolin Kebekus show, where staff confirmed on February 11, 2022, that this episode was not broadcast live. They explained the eye effect was intentionally edited into the program after the show was recorded as a humorous commentary on conspiracy theories.

A clip of the Dr. Phil Show appears at the 6:38 mark. The episode was posted on the Dr. Phil YouTube channel on November 4, 2014. His guest is a woman named Janey O'Connor who was speaking in defense of her stepfather Jack Daniel McCullough. O'Connor was photographed by the press in 2011 and told her story to CNN in 2013. O'Connor's eyes (pictured above on the left) are not photoshopped. She truly does have unusual eyes, but this does not mean that she is a reptilian. Lead Stories found photos of a different person (pictured above on the right) posted to imgur.com titled, "My bilateral symmetric coloboma, with retina images." Medlineplus.gov describes coloboma:

Coloboma is an eye abnormality that occurs before birth. Colobomas are missing pieces of tissue in structures that form the eye. They may appear as notches or gaps in one of several parts of the eye.

The clip appearing at 5:40 is an example of riffing on a meme. This video originated in a November 12, 2019, press conference given by Chilean President Sebastián Piñera. Standing beside him was Karla Rubilar, minister of social development and family. The moment of Rubilar's fixed gaze occurs at 3:38 minutes into the president's speech. The same day as the press conference, a clip of that moment was posted on Twitter with a take on the "Nobody" meme format. The cooperativa.cl video was shot from a slightly different angle than the CNN Chile footage used in the meme. 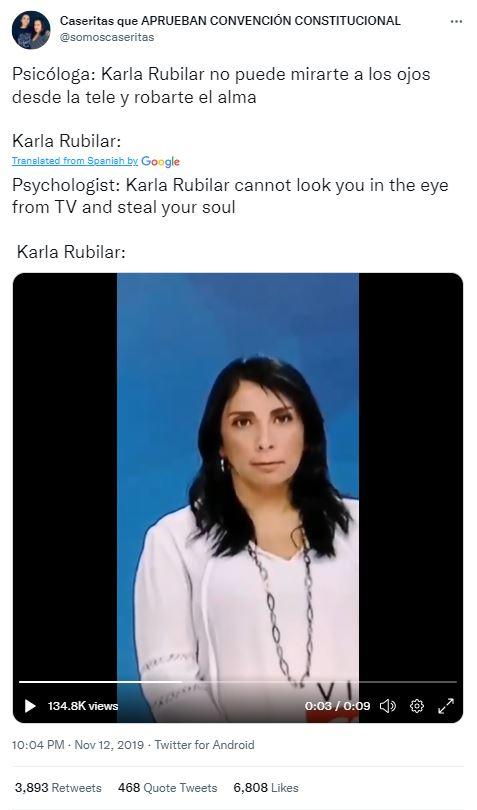 It was only after the unmodified clip went viral on Twitter that someone edited Rubilar's eyes to transform them to reptilian eyes. This edited version was posted on the ufo.persian Instagram account on May 1, 2021. When the video clip went viral a second time in Middle Eastern conspiracy circles, it made news back in Chile.

At the start of the compilation video the narrator poses this question:

The remaining five videos in the compilation show various types of video distortion. These technical glitches can occur during production, during transmission and through the degrading of files when they are saved, copied or uploaded multiple times. Glitching effects can also be added intentionally to videos in post-production editing. Video glitches do not indicate that the subject is shapeshifting or unable to hide their "true reptilian form" from electronic equipment.

One reason glitching is frequently isolated to the areas where people move in-frame is because of the way video files are saved. In order to decrease the amount of data that must be transmitted, non-moving parts of the video, the base image called the I-frame, may only be refreshed every few seconds. The P-frames record the parts of the image that have moved.

At 2:57 in the compilation video is an extremely degraded clip of Sophia Vergara hosting "Saturday Night Live." This video was posted to the Saturday Night Live YouTube channel on October 18, 2013. The original (above right) does not show any of the distortion highlighted in the poor-quality clip posted on Facebook.

The clip at 1:15 in the compilation shows a MyFox Los Angeles interview with The Bangles leading up to their concert at the Orange County Fair on July 27, 2007. During the interview a glitch begins to develop and eventually both women's faces are obscured by a bold black and white pattern (below left). Lead Stories reached out to Fox 11 to enquire about the glitch but had not received a reply at the time of publishing. We were unable to find the original Bangles' interview on Fox -- a better-quality copy than the Facebook clip, with audio, is posted on a shape-shifting conspiracy channel.

When searching for the original Bangles footage, Lead Stories encountered several examples (here and here) of the black and white pattern glitch. All three examples happened in 2007 era broadcasts.

The segment at 3:27 of the compilation clip is the current event show, "Bendita" from Argentina. There is a technical glitch just after the 5:44 mark in the live broadcast. In the original copy on the Bendita YouTube channel, this hiccup is visible -- all sound and video freezes for a second, and when it picks back up the sound is good but the image is glitchy. This doesn't affect only the image of the host, but also shows in the text captions and videos on the large screen monitors behind her.

The remaining videos, at the start of the compilation and near the end, at 7:00, show minor glitches in the moving faces of the people on screen. Lindsay Heller appeared on Fox on February 17, 2014, but that video is no longer available. The video featuring Jon Scott discussing Benghazi documents dates from around April 29, 2014. While other degraded and sensationalized conspiracy copies exist of this newscast ,which also featured Catherine Herridge, Lead Stories could not find this segment on Fox websites. Herridge does appear here on foxnews.com in additional reporting and does not have any glitches on her face.