Is there HIV and "foreign bacteria" in COVID vaccines or booster shots?? No, that's not true: The mRNA vaccines made by Moderna and Pfizer deliver biological blueprint material that causes your cells to generate spike proteins, which train your immune system in case you are exposed to spike protein-bearing SARS-CoV-2. Like many other vaccines long in use, the Janssen/J&J vaccine contains a piece of a modified virus that does not cause infection, but trains your immune system to respond to spike-bearing SARS-CoV-2. The Food and Drug Administration (FDA) lab analysis of the vaccines shows no HIV or bacterial materials, and an experienced HIV researcher who also has worked on COVID vaccines calls the claim "silly."

The claim appeared in a February 2, 2022, Facebook post (archived here) under the title "The 2nd booster has 8 strains of HIV.." It opens:

81 STRAINS OF FOREIGN BACTERIA!
23% OF THE POPULATION IS GONNA DIE 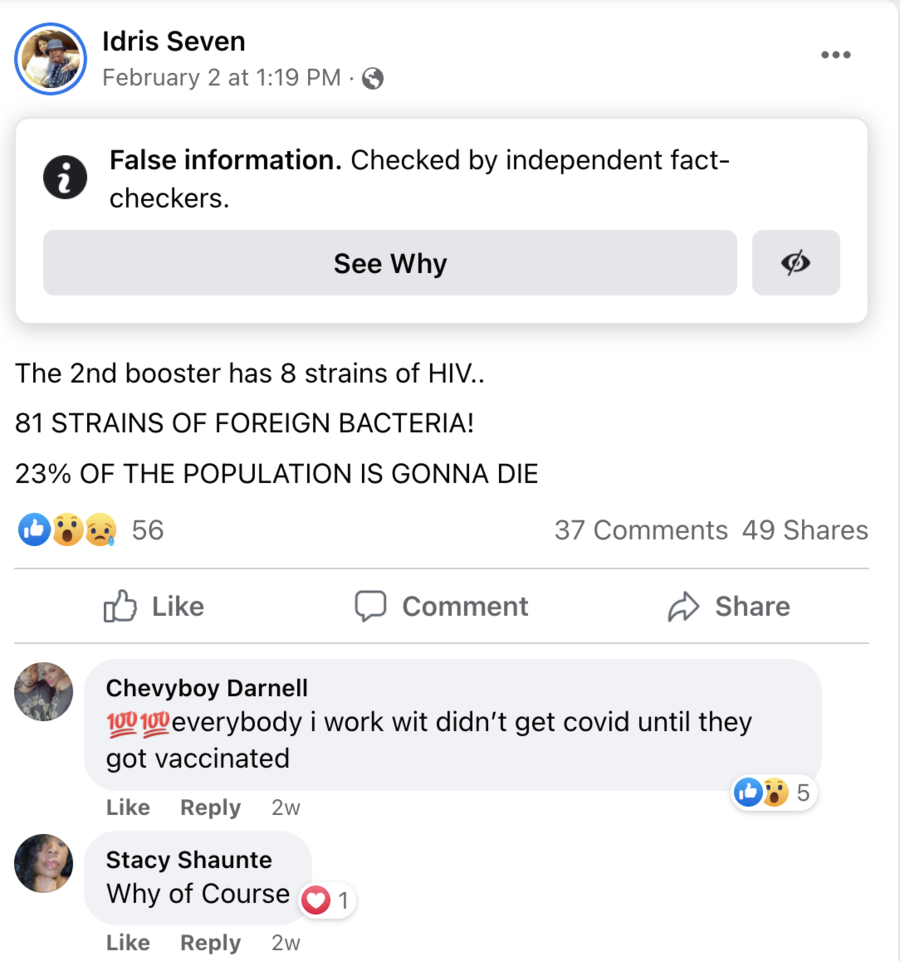 The claim is made without documentary evidence, sworn witness statements or other independent verification that would be the minimal requirement for making an extraordinary claim about matters of science and grave public import.

Professor Douglas Drevets, M.D., of the University of Oklahoma College of Medicine, who is also infectious disease chief at OU Health, said the claim ignores the known facts about vaccines in general and about the COVID vaccines in specific. In a February 16, 2022, email to Lead Stories, Drevets wrote:

This is about as silly as saying that each booster contains an elephant. It is simply false and beggars belief. It reminds me very much of an old cartoon lampooning Edward Jenner in which people who were vaccinated against smallpox using a strain of cowpox developed "cows".

First of all, there are no human products, e.g. cells or fluids, in the chain of development of the vaccines, so {no} opportunity to become contaminated with HIV. Second, the manufacturing is done under very strict sterile conditions to keep bacteria out of the final product. Third, it seems that if any such event did happen, many news agencies would be carrying the story, but this isn't happening either.

Professional medical scientists peer-reviewed the safety testing for publication of results in a top journal of medical science after more than 79,000 volunteers enrolled in field testing of the vaccines.

The results of the Pfizer safety trial, which enrolled more than 40,000 volunteers, were published in a December 10, 2020, article in the New England Journal of Medicine.

The results of the Moderna trial, which enrolled more than 30,000 volunteers, were published in a December 30, 2020, New England Journal of Medicine article.

Results of the Janssen vaccine safety trial, which enrolled more than 19,000 volunteers, were published in an April 21, 2021, article in the New England Journal of Medicine.

Independent of that, one of the leading medical centers in the country, The Mayo Clinic, has promoted use of the vaccines as safe and effective, summarizing its findings on effectiveness of the vaccines in this chart: