Is a meme correct that Chelsea Manning was "in jail" as of March 2022? No, that's not true: Manning was released from jail in 2020 and is free as of this writing. Manning's recent tweets from her verified Twitter account, as well as news reports about her, confirm that she is no longer incarcerated.

The text below the images of Cheney, Bush and Clinton read:

The text below the images of "Assange, Manning, and Snowden" read:

Below the images, the bottom of the meme reads:

YOU KNOW SOMETHING IS WRONG WHEN...
THE CRIMINALS ARE FREE AND THE PEOPLE WHO EXPOSED THEIR CRIMES ARE IN JAIL OR HAVE TO FLEE 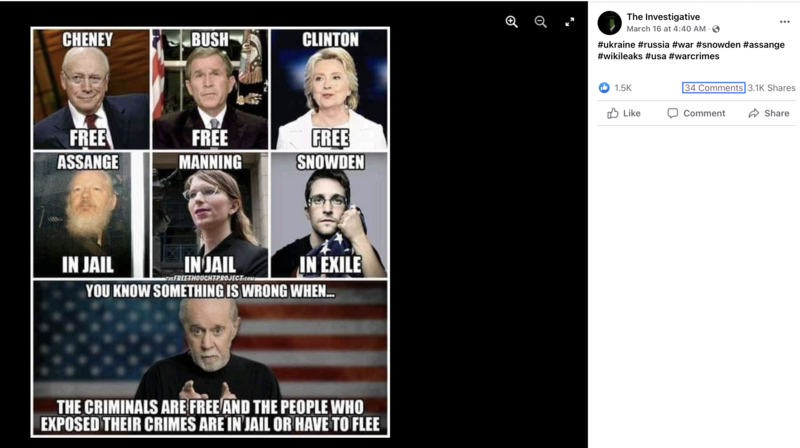 While the meme in its totality appears to be a social commentary, this fact check will focus only on the declaration that Chelsea Manning was in jail at the time the meme was posted.

Manning was released from jail on March 12, 2020, after she had been detained for 11 months for refusing to testify before a grand jury investigating Wikileaks founder Assange. According to The Washington Post, a federal judge announced that the grand jury had been disbanded and therefore Manning's detention "no longer serves any coercive purpose."

A March 7, 2022 tweet from the verified Twitter account of Chelsea Manning has also confirmed that she is not only out of jail, but will be publishing a book soon as well.