By Uliana Malashenko and James Rosen

Was U.S. citizen Brent Renaud, who was killed March 13 by Russian troops at a checkpoint near the Ukrainian capital of Kyiv, an American intelligence operative? No, it is not true. The claim was made with no evidence of Renaud's affiliation with the CIA or any other U.S. spy agencies. He was an award-winning documentary filmmaker whose work for the New York Times, HBO, Vice, the Discovery Channel, and National Geographic was highly acclaimed.

The claim that Renaud was a spy first appeared on March 13, 2022 on Telegram, a platform founded by the Russian Durov brothers in 2013 and now the largest social network in Russia.

"An American spy working as a journalist for a media newspaper

was killed near Kiev, Ukraine's capital"

Here is how it looked at the time of posting:

The source of the claim, Sabereen news, is an account associated with Asa'ib Ahl al-Haq, an Iranian-backed militia group in Iraq. On January 3, 2020, the United States added it to the list of terrorist organizations.

Lead Stories confirmed that the translation from Arabic to English was accurate. But the post did not mention Brent Renaud by name or cite a source of information.

Nevertheless, the claim quickly appeared in multiple posts on Twitter. Some tweets, like this one noted that Renaud had not worked for the New York Times since 2015 and repeated the Sabereen news claim that he had been a spy. 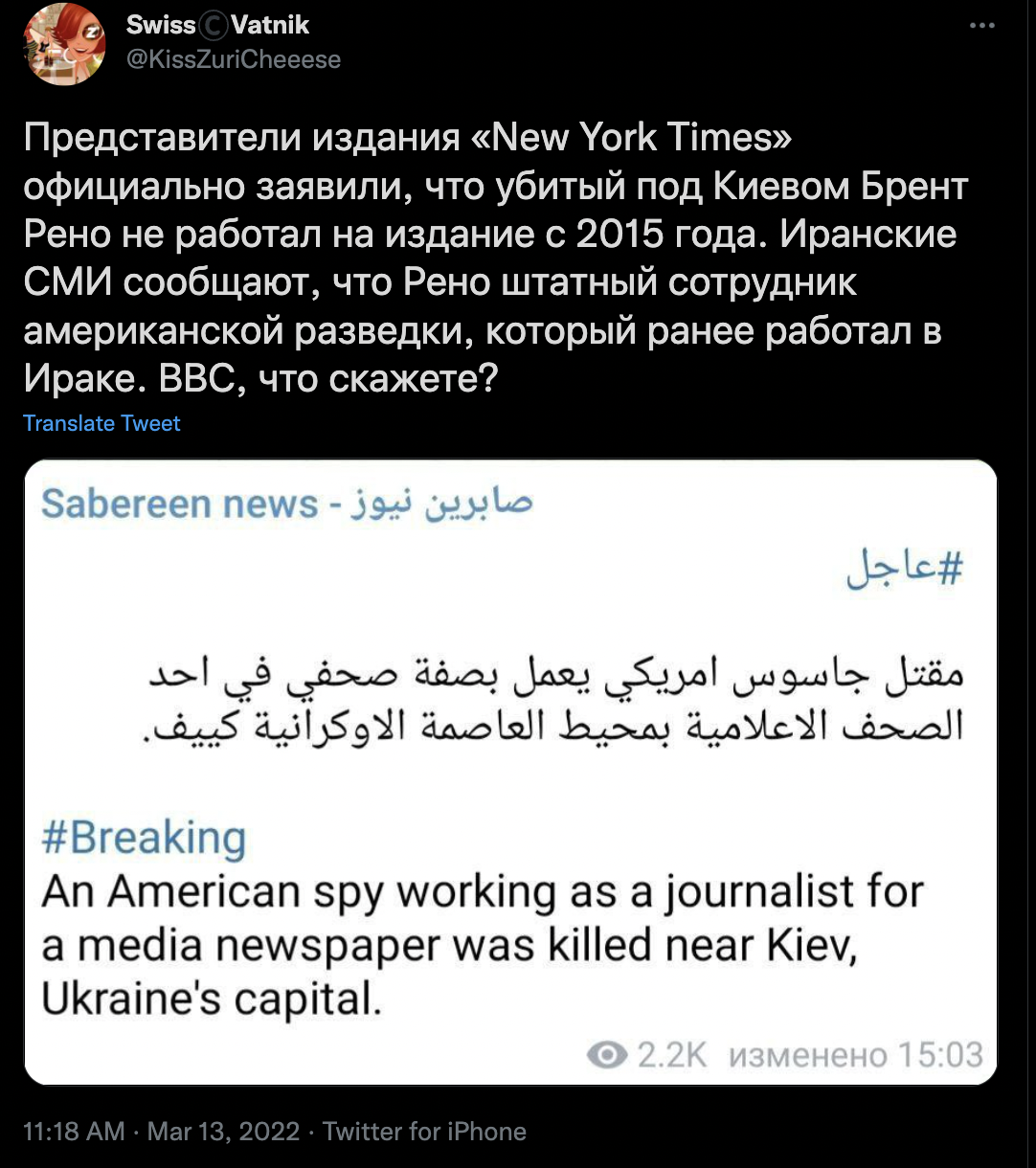 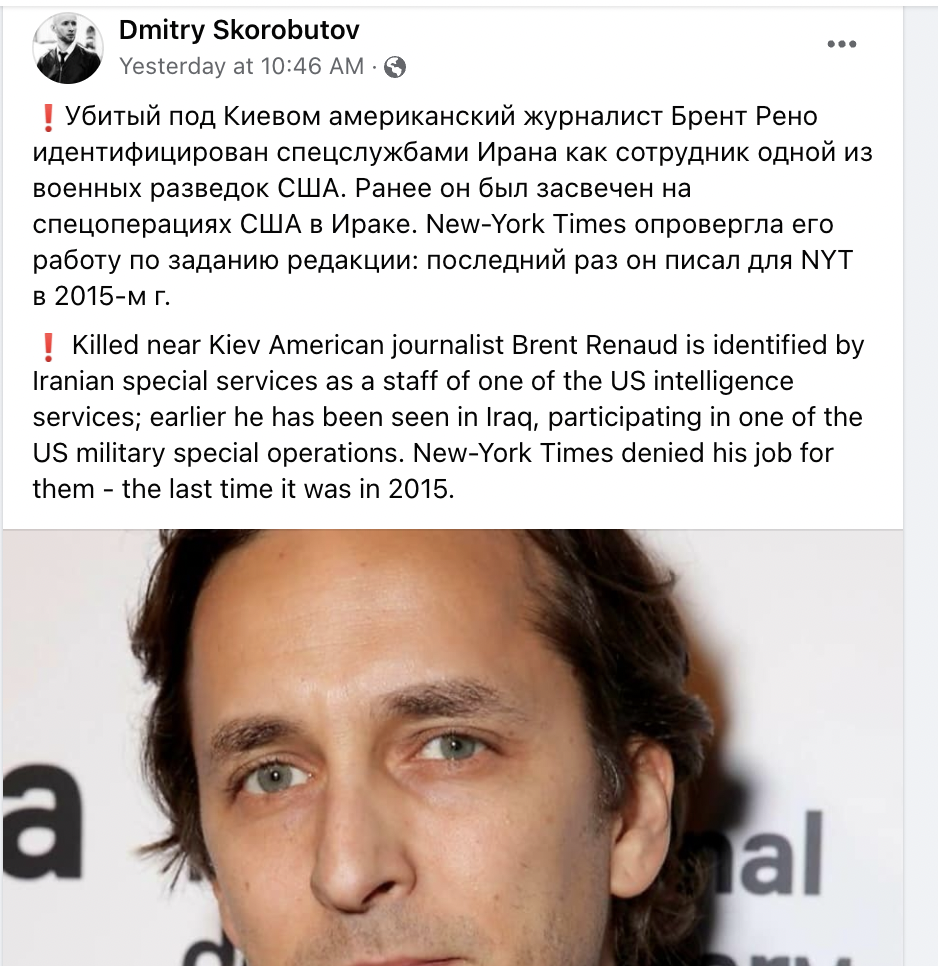 It should be pointed out that the English translation of this post apparently written by its author was not entirely accurate. For instance, the Russian original referred to U.S. military intelligence while the English version omitted the word "military". 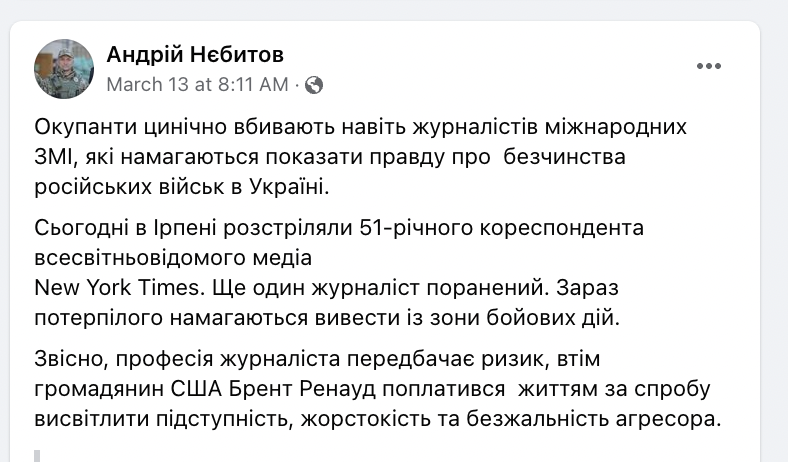 Occupants are cynically killing journalists from international media organizations, who are trying to show the truth about depredations of the Russian army in Ukraine. Today, a 51-year-old correspondent of an internationally known outlet, the New York Times, was shot to death in Irpin. One more journalist is wounded. He is being transferred from the frontline. The journalistic profession оbviously involves risks, but U.S. citizen Brent Renaud lost his life in an attempt to highlight the insidiousness, cruelty, and ruthlessness of the aggressor.

Though it does not identify him as a spy, the police post was not entirely accurate. It concluded that Brent Renaud was a New York Times journalist based on the newspaper's press card and the U.S. passport found on him.

The New York Times responded with a statement mentioned in a March 13, 2022 article confirming that Brent Renaud worked for the company back in 2015, but not at the time of his death.

Simultaneously, the Sabereen news' claim started circulating in Russian media, but most of those reports didn't identify the source.

For example, Mignews, owned by a Ukrainian anti-Yelensky parliament member with ties to the Kremlin, cited "Russian patriotic media" as a primary source and also referred to unnamed Iranian outlets.

Here is how it looked at the time of posting, in English and in Russian: 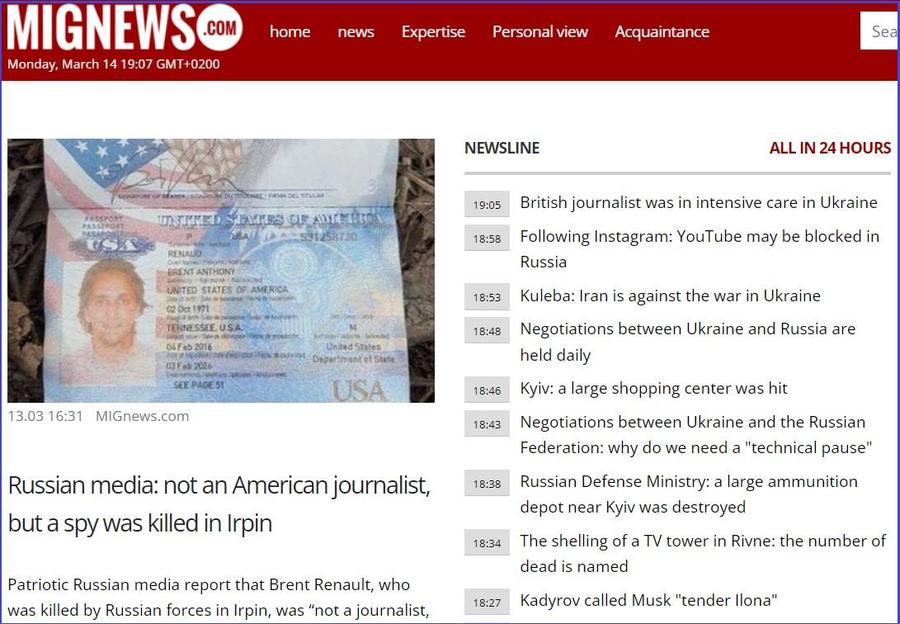 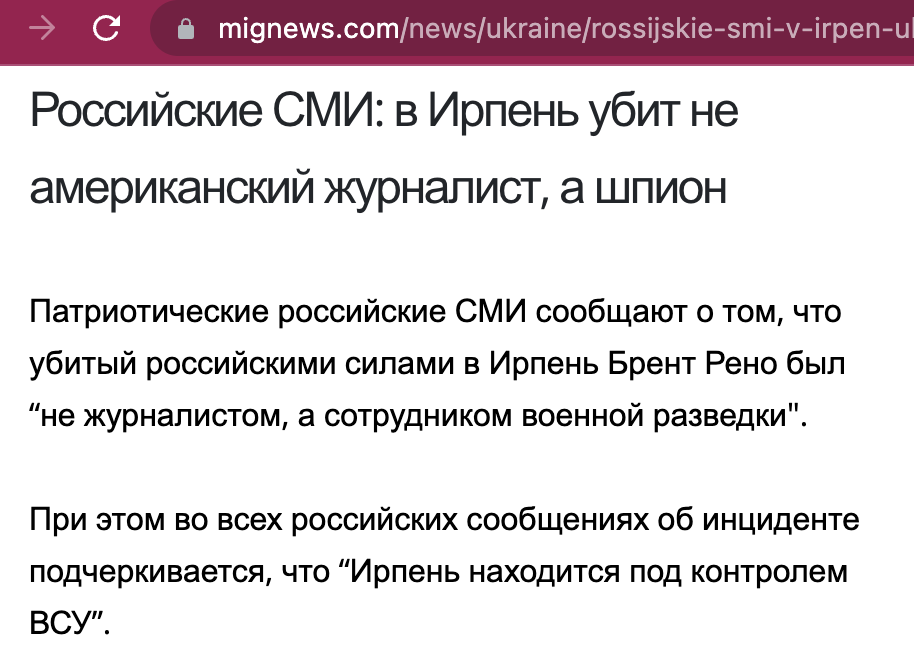 The claims about Renaud began to surface online within hours of his death.

Juan Arredondo, an adjunct faculty member at the Columbia University Graduate School of Journalism who was working with Renaud in Ukraine, said he was wounded in the Irpin shooting that killed Renauld. As Arredondo was being prepared for surgery, he did a brief video interview from the hospital with Annalisa Camilli, a journalist with the Rome weekly news magazine Internazionale, in which he said that he and Renaud were filming refugees fleeing Irpin when they were shot at a checkpoint.

It was a part of the TIME global project about migration, the statement of the company's executives Edward Felsenthal and Ian Orefice clarified.

People who knew Renaud as a friend or colleague denounced online claims about him being a spy.

According to his friend, long-time colleague, and former boss Jeffrey Newton, Renaud had been working on the TIME project for about a year, exploring migration patterns caused by different factors ranging from wars to climate change. "He was pretty much done with the project and they were about to start editing the film when Ukraine happened," Newton told Lead Stories. "So he felt that he couldn't complete the film on migration without getting the Ukrainian story, the biggest refugee migration happening right now."

Renaud grew up in Little Rock, Arkansas, but went to Ivy League schools in New York City and Boston. "In a world where we work in television and films, there's a lot of loud boisterous characters, and he was the opposite of that," said Newton. "He was quiet and reserved. But he also kept that sort of Southern hospitality and Southern charm that allowed him to freely make good connections with the people."

Renaud often worked in tandem with his brother, Craig. A documentary series about the Arkansas National Guard deployed in Iraq was the Renaud brothers' first big success. Laura Perez, a Puerto Rico-based independent journalist who studied with Brent Renaud at Harvard, told Lead Stories in a March 16, 2022 phone interview that a person affiliated with the U.S. government in any capacity would be highly unlikely to take such a critical stand.

"He showed how they didn't have the proper equipment to go into a war zone, how young men were going into the battlefield without knowing why they were going or not even wanting to go there," said Perez. "It's not something someone who was very pro-U.S. would say, not at all."

Another example of Brent Renaud's work cited by Perez was a story about refugees traveling from Central America to the southern border of the United States. "When you give a closer look to that problem, there's a lot that comes out that doesn't make us look that great," she said.

Perez described Brent Renaud as "the most free-spirited person you could imagine" and emphasized that a person with this kind of personality would be highly unlikely to join such a hierarchical government structure as the CIA.

Even when the Renaud brothers covered wars, they didn't cover the military aspect of it - instead, they focused on human-centered documentaries. "Brent's and his brother Craig's drive has often been to put themselves on the line for important stories that need to be told in an unbiased way, to highlight the overlooked, give voice to the voiceless, to highlight people in need," CEO Arkansas PBS Courtney Pledger told LeadStories.

Jeffrey Newton explained that most of the stories Brent Renaud worked on after his first success were editorial assignments, including his other trip to Iraq."I hired him to work on a project called Chain of Command," said Newton. "It was a National Geographic project, looking at the US global fight against terrorism. That project was across like eight countries. There were a ton of teams involved, but he was my main shooter for Iraq. I also hired him to go to Libya with me to work on a store at ISIS trying to take over control of Libya in 2015-2016."

For a guy to be a spy and also have the time to be an award-winning feature documentary maker, it's beyond unusual - it's impossible. He and I were accused of the same thing when we were in Somalia, doing a story on child soldiers. The government was paranoid about everybody being there, but they didn't want to eliminate the problem because it showed their failure. So what's the one way you discredit journalists trying to uncover your corruption? You call them a spy. It's the oldest trick in the book - and they are never able to put up any proof.

Larry Foley, Chair of the School of Journalism and Strategic Media at the University of Arkansas, worked with Brent Renaud as well. In fall 2019, Foley hired him as a visiting professor of journalism ethics.

That's utter nonsense. He was a journalist. He was a journalist when he went to bed, he was a journalist when he got up. It's an attack on someone's credibility who has sadly lost his life doing what he loved. Those (online claims) are vicious, malicious, and untrue. This is the opposite of what Brent was. He was a truth-teller. Those are lies. He was outstanding. He connected with the faculty. He engaged with students. He conducted seminars and taught classes. I knew Brent and his work for years, and I always respected it, but during his time here, I got to know him on a personal level. He was a great guy; he felt like he needed to bring truth to people.

A year earlier, Renaud won a Nieman fellowship at Harvard University, where he studied trauma and its effects on poverty and violence in the United States. "Brent's filmmaking was exceptional, and what made it so was not just his abundant skill but a kindness and deep humanity he brought to his work," Nieman curator Ann Marie Lipinski told Nieman News. "He told us that what he sought in his journalism was thoughtful stories about disenfranchised people, and he lived up to that credo every day."

Samantha Appleton, an award-winning independent photographer, was Renaud's Harvard classmate. She described him as "a very kind person, a huge humanitarian, and a real animal rights advocate." Just like other people Lead Stories talked to, she emphasized a dramatic increase of false messages on social media during Russia's invasion of Ukraine.

We are dealing with a very complicated war: fake videos and propaganda going viral every day. It's the first death of an American, and it's going to be more prominent in terms of propaganda because he is American. I think people don't understand how dedicated journalists are. So it's easier to call them spies before journalists, and that happens all the time. For journalists, particularly filmmakers and still photographers, there's only one way to get the story and that's to be right in the middle of it.

According to IMDb, the Renaud brothers won the Alfred I. DuPont - Columbia University Award, one of the most prestigious in broadcast journalism, twice and twice was nominated for Emmy, among many other awards.

Brent Renaud's alma mater, Teachers College at Columbia University, where he earned a master's degree in Sociology and Education, issued a statement as well. "Teachers College joins the world in mourning the senseless killing of journalist Brent Renaud, a member of our alumni community," said its president Thomas Bailey. According to the statement, Renaud's death was "among the more than 1500 killed civilians reported since the beginning of the Russia-Ukraine War in February, with United Nations officials expecting actual numbers to be higher."