Did George Orwell say or write: "The people will believe what the media tells them they believe"? No, that's not true: A spokesperson for The Orwell Society tells Lead Stories that this is "100% not an Orwell quote." The quote at the center of this claim was circulated from a Russian troll farm, according to a 2019 book on Orwell's work.

The claim appeared in a Facebook post (archived here) on March 22, 2022. The post featured text below an image of a hand gripping a chain that connects to people who have television screens as heads. The text read:

The people will believe what the media tells them they believe.
- George Orwell 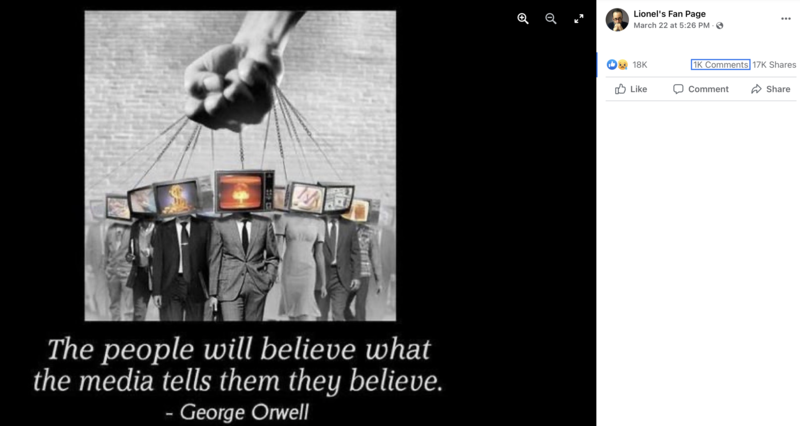 Lead Stories reached out to Benedict Cooper, publicity officer of The Orwell Society, and he responded by email on March 30, 2022, saying this quote has been debunked in the past:

I can confirm that this is 100% not an Orwell quote. This has been shown to be not even something Orwell would have said in that way, partly because the word 'media' was not used in the same sense in his lifetime.

Cooper also cited this page from his own website titled, "Drifting from the truth: debunking fake Orwell quotes," -- which includes a quote that Lead Stories has already proven to be false. That story can be found here.

A Google search of the query "Did George Orwell say 'the people will believe what the media tells them they believe'" also produced this June 5, 2019, Powell's Books blog page where the author of "The Ministry of Truth: The Biography of George Orwell's 1984," Dorian Lynskey, stated:

In fact, Orwell never wrote those words, nor do they sound like something he would have written. For one thing, 'the media' did not enter common usage until after his death in 1950, and this stickler for correct prose would never have used the singular. For another, he had too much faith in ordinary people to portray them as gullible puppets. A report commissioned by the Senate Intelligence Committee later discerned that the phony quotation had been disseminated by the Internet Research Agency, Russia's most prolific troll farm.

The blog page did not elaborate on the Senate Intelligence Committee's report or the Russian troll farm.

PolitiFact also cited Lynskey's work in debunking the claim that the quote came from Orwell.