Did President Joe Biden tweet a stock photo in March 2022 with trees covered in leaves taken in the middle of summer? No that's not true: The photo of Biden boarding Marine One on March 23, 2022, is not old or stock. It was taken at the time the boarding occurred. It shows the South Lawn of the White House. On the left-hand side of the photo, is a tree known as the Jackson Magnolia because it is believed by many that President Andrew Jackson planted it in remembrance of his deceased wife. The nearly 200-year-old southern magnolia is evergreen and keeps its leaves through winter into spring.

The claim appeared in this post (archived here) where it was posted on Instagram on March 24, 2022, by the account @NashvilleTeaParty with writing in yellow over a screengrab of the original @POTUS tweet " The claim said:

Biden tweeted a stock photo yesterday with trees covered in leaves taken in the middle of summer. Does it matter that Biden is sending out fake photos?

Here is how it looked: 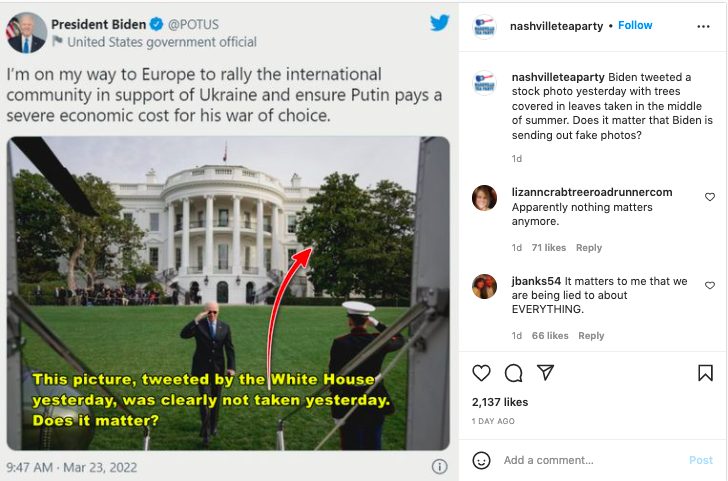 The text in yellow overlaying the photo said: "This picture, tweeted by the White House yesterday, was clearly not taken yesteday. Does it matter?"

As President Biden was about to board Marine One to embark on his trip to Europe, he spoke to the press, as seen in this video from Bloomberg filmed on March 23, 2022, which shows the same leafy magnolia trees like the photo. The video also shows the photographer in position inside Marine One taking the photo of Biden poised to enter the helicopter. Biden was embarking on his trip to shore up support for Ukraine and discuss more punishing economic policies against Russian President Vladimir Putin.

In 2017, then-first lady Melania Trump, after consulting with specialists from the National Arboretum, decided to remove a large part of the so-called Jackson magnolia on the west side of the South Portico. This article, published by The Washington Post on December 27, 2017, also has a Washington Post video at the top of the article, that shows a large portion of the Magnolia tree as it's being cut back with green leaves in the month of December with Christmas decorations.

According to historic lore, President Andrew Jackson planted the tree in 1835, in honor of his deceased wife. Some historians disagree and say it was planted after the Jackson administration.

The tree, specifically from the magnolia grandiflora (aka southern magnolia) species, according to gardenia.net, is a "magnificent, dense, evergreen tree." It does not shed its leaves in the winter, unlike other species that are deciduous.