Did Russian missiles kill up to 180 foreign mercenaries at the Yavoriv military base in Ukraine on March 13, 2022? No, that's not true: There is no evidence of any nationality but Ukrainians among the dead. Although it can't be stated there were no foreign volunteers or military trainers at the base, no other country has reported casualties among its citizens. The Defense Ministry of Ukraine asserted there were no foreigners among the 35 people killed.

This is how the post appeared at the time this fact check was written: 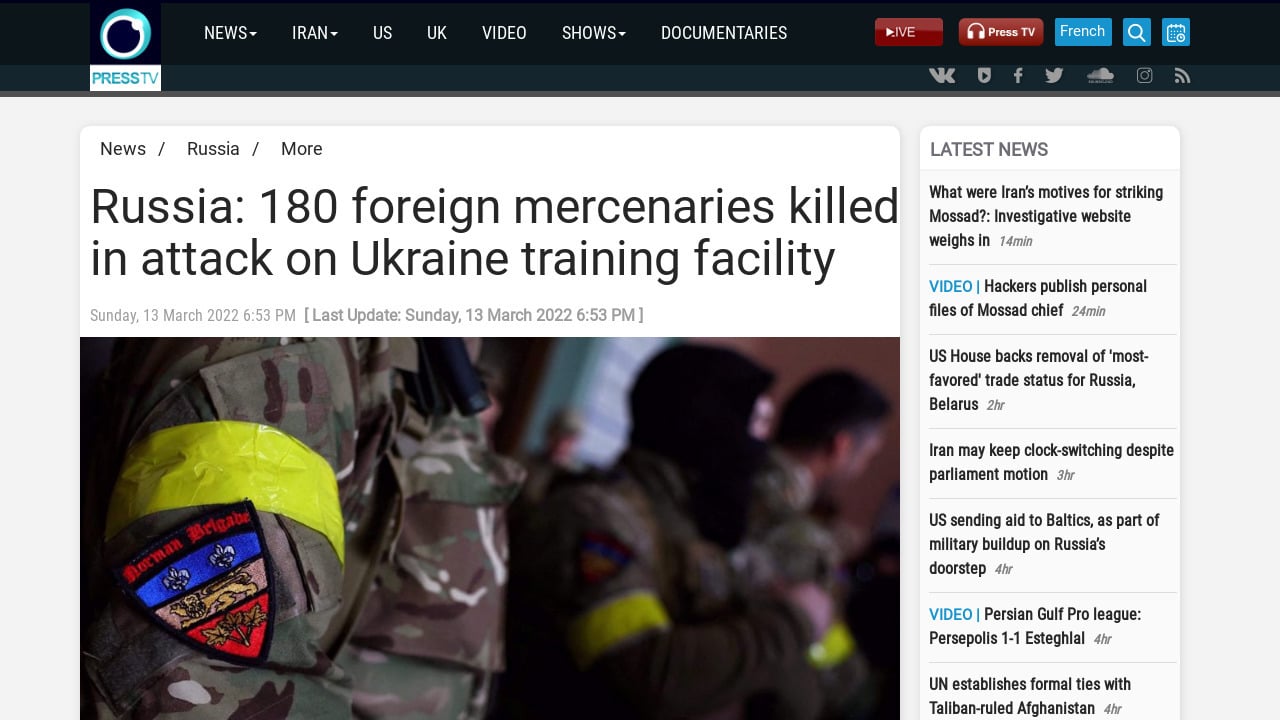 The International Peacekeeping and Security Center in Yavoriv has been a ground for common training for military personnel from Ukraine and other countries, including NATO members, since 1995. Amid the threat of a Russian invasion, member countries recalled their military instructors. So did the United States, the United Kingdom and Canada. In a March 16, 2022, email to Lead Stories, the NATO press office said there were no NATO forces in Ukraine.

Celebrating the missile strike, Russian officials have used the term "наемник" (mercenary) and not "доброволец" (volunteer) to describe foreign military veterans who have showed up in Ukraine to fight alongside Ukrainians. When fighting for Russia, such troops are called volunteers. During World War II, historians report, almost a half million Czechs, Slovakians and other Europeans volunteered to fight alongside the Soviet Union's army against German invasion of the USSR.

After the start of Russia's 2022 war against Ukraine, Ukrainian President Volodymyr Zelenskyy created the International Legion of Territorial Defense as part of the Territorial Defense Forces of the Armed Forces of Ukraine. The Armed Forces of Ukraine announced in a tweet on March 7, 2022, that the first volunteers arrived in Ukraine and joined the Kyiv troops. It was not reported whether the foreign volunteers were undergoing preliminary training at the Yavoriv base.

The Military Times reports that the process of recruiting to the Ukrainian territorial defense is slower than veterans would like. The article says 750 veterans from Georgia, the U.K. and U.S. wanted to join the legion at the time of writing. It is known from open sources that the training camp is in the Kharkiv region.

Citing an unnamed source, The Daily Mirror wrote that three British veterans could have been killed in the attack on Yavoriv:

Three British ex-special forces troops are feared to have been killed in the deadly Russian airstrike on a base close to the Polish border, the Daily Mirror can reveal.

As of March 17, 2022, neither the U.K. nor any other country has officially claimed casualties. In a March 17, 2022, email to Lead Stories the British Embassy in Ukraine said they were not able to verify any British nationals were at Yavoriv Peacekeeping and Security Center on March 13, 2022.

Ukrainian official sources say the claim in question is a fake. Ukrainian Defense Ministry spokesman Markiyan Lubkivsky called such reports "Russian propaganda." Maksym Kozytskyi, the head of the Lviv military administration, said in a comment to Radio Svoboda: "There are no casualties among the foreign peacekeepers during the March 13 attack. Claims of dead foreigners is fake."