Does a video claiming to show "Ukraine now" in fact show Ukraine now? No, that's not true: The video shows western Kentucky in December 2021, after the area was hit by devastating and deadly tornados.

The claim appeared in a Facebook post on February 27, 2022. It includes a roughly 20-second video and a caption that reads:

Contrary to its caption, the footage does not show Ukraine in February 2022; it shows western Kentucky in 2021. The area was hard hit by tornados in December 2021.

National Public Radio (NPR) posted the video on December 11, 2021, as seen here. A side-by-side comparison of the two videos can be seen below: 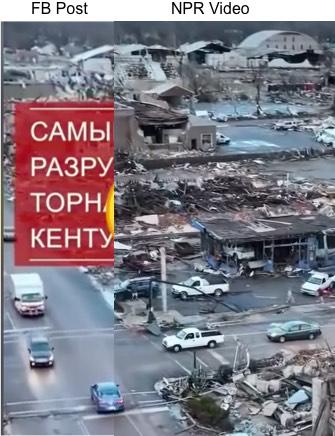 Clement identified the video's location as Mayfield, Kentucky, one of the towns devastated by the December 2021 tornados. In his video, you can see the name "Mayfield" on the side of what remains of a building. The Facebook video was edited to exclude that shot.