Did the U.S. government secretly pay major media outlets to promote COVID-19 vaccines and suppress negative coverage? No, that's not true: The public education campaign via ads was announced by the White House and the Department of Health and Human Services (HHS) in the early months of 2021. The funding was approved by Congress. The paid ads were handled by sales teams that operate independently of the editorial teams and newsrooms of various media organizations that carried the ads.

The Biden administration made direct payments to nearly all major corporate media outlets to deploy a $1 billion taxpayer-funded outreach campaign designed to push only positive coverage about COVID-19 vaccines and to censor any negative coverage. 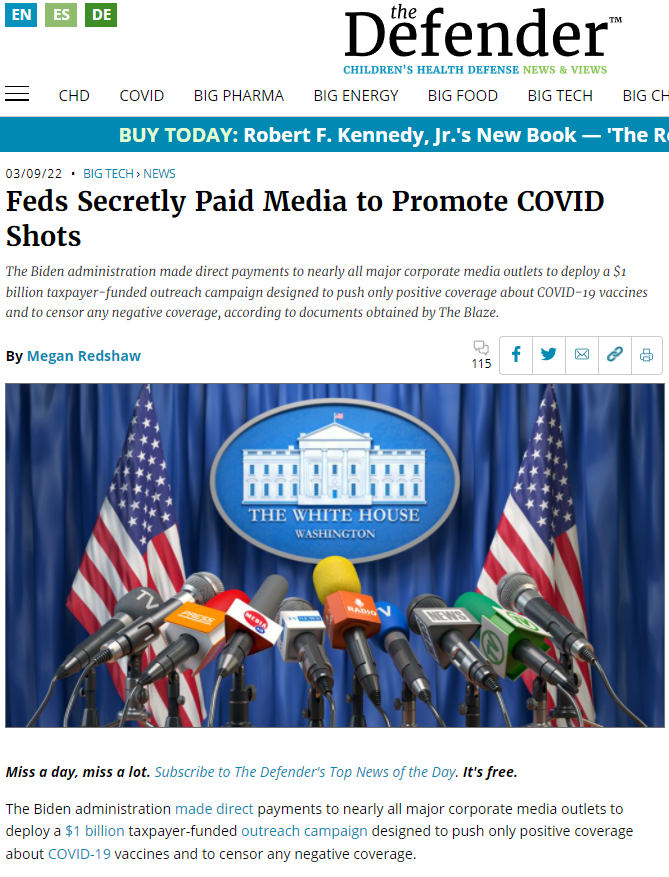 The claim of secret payments to major media outlets in The Defender article is based on reporting by The Blaze, a conservative media company. The Blaze said its findings came from a request made under the Freedom of Information Act:

In response to a FOIA request filed by TheBlaze, HHS revealed that it purchased advertising from major news networks including ABC, CBS, and NBC, as well as cable TV news stations Fox News, CNN, and MSNBC, legacy media publications including the New York Post, the Los Angeles Times, and the Washington Post, digital media companies like BuzzFeed News and Newsmax, and hundreds of local newspapers and TV stations. ...

Though virtually all of these newsrooms produced stories covering the COVID-19 vaccines, the taxpayer dollars flowing to their companies were not disclosed to audiences in news reports, since common practice dictates that editorial teams operate independently of media advertising departments ...

Lead Stories reached out to The New York Times, Washington Post, Fox News and MSNBC for comment. Fox was the only news organization that responded by the time of writing. In a March 14, 2022, phone call with Lead Stories, a representative said Fox would have no on-the-record statement.

Not a secret process

Nothing about the public awareness campaign for COVID vaccines was hush-hush. After much public debate, Congress passed the American Rescue Plan, which was signed into law by President Joe Biden on March 11, 2021. It included $1 billion "to strengthen vaccine confidence in the United States, including its territories and possessions." Federal law allows the head of the HHS through the Centers for Disease Control and Prevention (CDC) to conduct public awareness campaigns on the importance of vaccinations:

The Secretary, acting through the Director of the Centers for Disease Control and Prevention and in coordination with other offices and agencies, as appropriate, shall award competitive grants or contracts to one or more public or private entities to carry out a national, evidence-based campaign to increase awareness and knowledge of the safety and effectiveness of vaccines for the prevention and control of diseases, combat misinformation about vaccines, and disseminate scientific and evidence-based vaccine-related information, with the goal of increasing rates of vaccination across all ages, as applicable, particularly in communities with low rates of vaccination, to reduce and eliminate vaccine-preventable diseases. ...

The campaign under this section may-

(1) include the use of television, radio, the internet, and other media and telecommunications technologies ...

On March 25, 2021, two weeks after the president signed the American Rescue Plan, the White House announced a "Historic $10 Billion Investment to Expand Access to COVID-⁠19 Vaccines and Build Vaccine Confidence in Hardest-Hit and Highest-Risk Communities." And then on April 1, 2021, HHS issued a press release on the next phase of its COVID-19 public education campaign:

And, today, the first TV ads, including in Spanish, will start running nationwide to encourage Americans to get vaccinated as soon as they are eligible. Importantly, the ads will emphasize a message - We Can Do This - that is a hopeful and unifying call to action that we each can do our part to end this pandemic by getting vaccinated.

While HHS didn't specify which media outlets, no secret was made that the campaign was beginning.

In a March 14, 2022, email to Lead Stories, Duane Pohlman, the chair of the Professional Standards & Ethics Committee of the Society of Professional Journalists, said this about the government's vaccination ad campaign:

On its own, the fact that the government purchased pro-vaccination advertising does not prove any influence on a news organization and its editorial decision-making regarding the pandemic. For instance, political commercials fuel a huge amount of advertising dollars and, as a general rule, there is no evidence that the political ads influence editorial decision-making. Quite the opposite, the ads appear even as many of the same news outlets who receive the commercial dollars aggressively cover the candidates themselves. In the same way, I have not seen any evidence the federal government's decision to spend large amounts of advertising for pro-covid vaccination ads - which was made in a very public way - influenced coverage. The Society of Professional Journalists (SPJ) Code of Ethics clearly states that news should be 'distinguished' from advertising and that journalists should 'act independently,' and 'avoid conflicts of interest.' As such, the vast majority of traditional newsrooms are separated from their advertising departments to avoid these entanglements. If the conflict is unavoidable (not intentional), the SPJ Code of Ethics instructs journalists to disclose that. That transparency is essential to trust.

You can find additional Lead Stories coverage on COVID-19 here.