Did Clementine Churchill, wife of former British Prime Minister Winston Churchill, tell him that if she had married a road cleaner that man would have become the prime minister? No, that's not true: There is no evidence that she said that. A historian who specializes in the Churchills wrote that the quote was manufactured. A Google search of keywords resulted in very similar quotes being attributed to two former U.S. first ladies, Michelle Obama and Hillary Clinton.

Sir Winston with his wife Clementine. 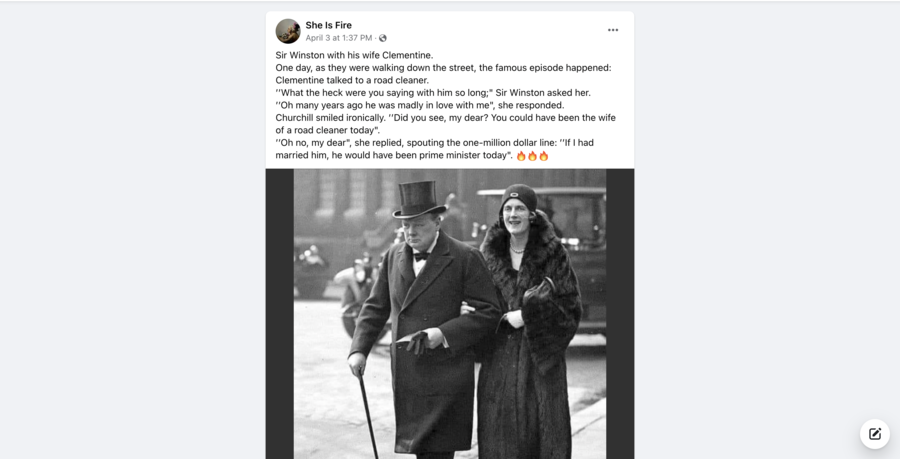 One day, as they were walking down the street, the famous episode happened:

Clementine talked to a road cleaner.

'What the heck were you saying with him so long;' Sir Winston asked her.

'Oh many years ago he was madly in love with me', she responded.

Churchill smiled ironically. 'Did you see, my dear? You could have been the wife of a road cleaner today'.

'Oh no, my dear', she replied, spouting the one-million dollar line: 'If I had married him, he would have been prime minister today'. 🔥🔥🔥

Richard Langworth, a historian specializing in Churchill, wrote on his website that the quote was manufactured without attribution.

Typing the phrase "if I would have married him quote" in Google resulted in a Pinterest link that attributed a very similar quote to former first lady Michelle Obama as well.

A slightly different quote was also attributed to Hillary Clinton in a Sydney Morning Herald article from May 29, 2020.

The Obama and Clinton quotes are slightly different from the quote attributed to Clementine Churchill. Michelle Obama supposedly speaks to a restaurant owner, while Hillary Clinton speaks to a gas station worker.