Did "the same system" determinine that Johnny Depp's defamation lawsuit could be live-streamed while the trial of Ghislaine Maxwell was not broadcast? No, that's not true: There are different media rules for different types of courts. The trial of Maxwell, now a convicted child sex trafficker, was in a federal court in Manhattan, while Depp's defamation lawsuit took place in a circuit court in Fairfax County, Virginia.

According to Rule 53 of the Federal Rules of Criminal Procedure, broadcasting of federal court cases is prohibited. The circuit court judge of Fairfax County allowed broadcasting of the Depp trial because Virginia state law allows coverage of certain trials. Virginia judges also have the authority to prohibit broadcasting of a trial if they so choose.

The same system that kept you in the dark about Ghislaine Maxwell and her client list, doesn't mind live-streaming Johnny Depp's trial 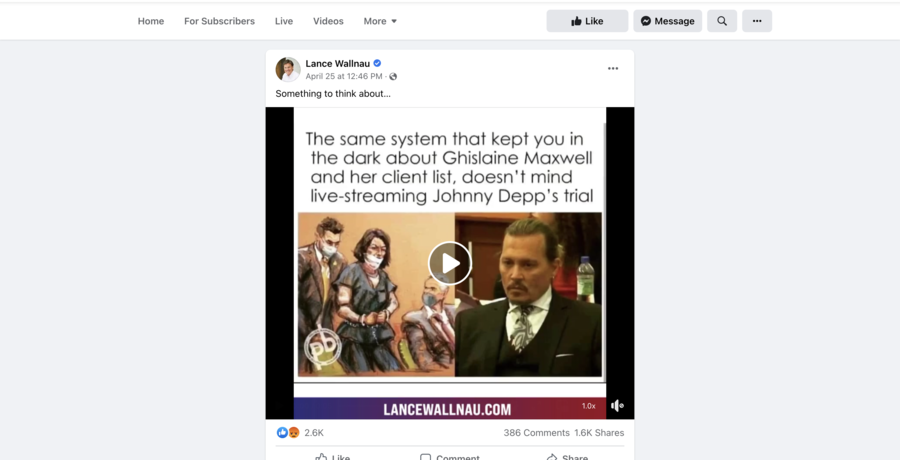 A circuit court is defined by Collins Dictionary as "any court that holds sessions in various locations within its judicial district," while a federal court is defined as "a court of a federal government, esp. one established under the Constitution of the United States."

In December 2021, Lead Stories debunked the claim that the media was not allowed in the courtroom of the Maxwell trial. Reporters for The Associated Press and NBC News recounted events from the courtroom while the trial was happening. However, the broadcasting of federal cases is prohibited, per Rule 53 of the Federal Rules of Criminal Procedure.

Depp's defamation trial took place in the Fairfax County Circuit Court in Virginia. In an order released on March 29, 2022, Circuit Court Judge Penney Azcarate ruled that broadcasting of this trial would be available. According to Virginia law, coverage of certain trials is allowed. However, even if the trial doesn't fall under the list of cases that cannot be covered, the presiding judge has the authority to prohibit electronic media and still photography coverage of public judicial proceedings.