Are sunless tanning products containing dihydroxyacetone dangerous because they "change your DNA," and as an alternative should people seeking a tan gradually increase their sun exposure (while avoiding burning) to build up a "natural sunscreen"? No, that's not true: Sunless tanning products are considered safer than other forms of tanning. There have been in vitro studies that detected DNA damage associated with dihydroxyacetone (DHA) that have called for further research. The Skin Cancer Foundation says that a suntan is evidence of DNA injury to your skin -- so the sun also damages DNA.

The medical consensus is that there is no "safe tan" from the sun or an indoor tanning bed. If a person is determined to develop the look of a suntan, sunless tanning products are the recommended alternative. Because an artificial tan does not protect skin from the sun, a person should still take other precautions like covering up, limiting midday sun and using sunscreen.

The claim appeared in a Facebook post published by Modern Alternative Mama on April 1, 2022. The post featured a screenshot of a PubMed.gov article title, but did not link to the article. The text in the image said: 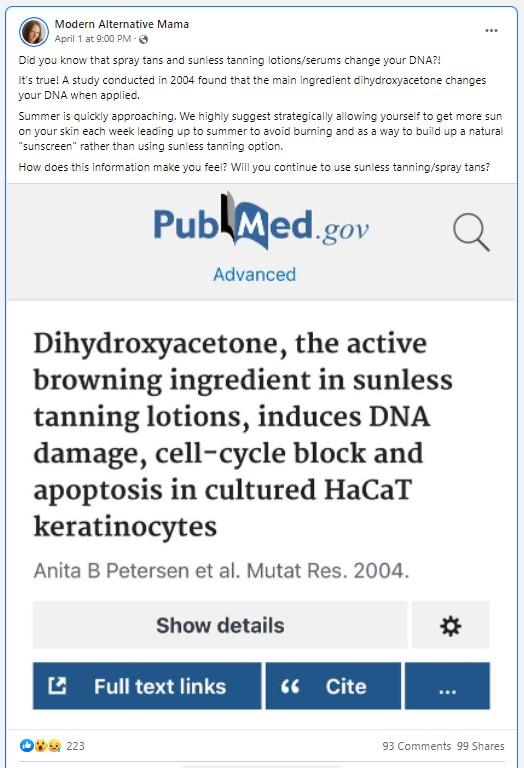 Did you know that spray tans and sunless tanning lotions/serums change your DNA?!

It's true! A study conducted in 2004 found that the main ingredient dihydroxyacetone changes your DNA when applied.

Summer is quickly approaching. We highly suggest strategically allowing yourself to get more sun on your skin each week leading up to summer to avoid burning and as a way to build up a natural 'sunscreen' rather than using sunless tanning option.

How does this information make you feel? Will you continue to use sunless tanning/spray tans?

A third element of this post appears in the discussion -- in the comment replies, the page manager suggests a "Sun Shield" product affiliated with the branding of the page as a skin protectant "to help prevent damage on a cellular level." The product's safety disclaimer on the website says:

This product and these statements have not been evaluated by the FDA. We make no claims about the SPF rating of this product because it has not been tested in any lab (only real-world tests). It is not 'official' sunscreen in any capacity. It is not intended to diagnose, treat, or cure anything.

Lead Stories reached out to the American Academy of Dermatology and was put in touch with two dermatologists who responded to our questions by email on April 6, 2022. Dr. Henry W. Lim, board member of the International League of Dermatological Societies, replied:

We recommend sunless tanning for individuals who want to have the appearance of having a tan. It is NOT a substitute for proper sun-protection (ie, shades, hat, clothing, sunglasses and sunscreen).
There is no 'safe tan' as tanning is a protective response of the skin as a result of UV exposure.
Data on dihydroxyacetone (DHA) causing DNA damage is on cell culture in laboratory. There is no evidence that application of DHA in sunless tanning products in human skin causes any DNA damage.

Dr. Bruce A. Brod, director of contact dermatitis and occupational dermatology at the University of Pennsylvania Perelman School of Medicine, responded:

Dihydroxyacetone is used in sunless tanners. Alone these do not provide any sun protection. The FDA allows its use as a cosmetic color additive for the skin. There is insufficient testing on the safety of its use in open areas of the body or mucous membranes. For that reason the FDA has issued an advisory that when used as a mist or spray there should be adequate protection in these areas such as coverings for the mouth and eyes. There is limited data on the safety of these products. Reports of adverse events with normal use are uncommon. Studies to demonstrate alterations of DNA were not performed in humans rather they were done in cell cultures so it is difficult to draw conclusions about this regarding safety in people. They generally react with the very top layer of skin to create a bronzed appearance that fades after 3 days.

Ultraviolet light from the sun or from indoor tanning devices are carcinogenic. There is no such thing as a safe tan. A suntan is the skin's response to try to protect itself from further damage. It is a carcinogen which means it causes skin cancer and the risks are cumulative. Dermatologists advise a multi-faceted approach to sun protection including adequate sun protective clothing and hats, avoidance of midday sun and use of SPF 30 or higher broad spectrum sunscreen on areas exposed to the sun.

The study title shown in the screenshot can be found as an abstract at the pubmed.gov website, but the full text of the study is behind a paywall. The Facebook post caption implies that the "DNA damage" happens when the product is applied but the study was conducted using HaCaT, a human keratinocyte cell culture in a laboratory. The abstract concludes:

The genotoxic capacity of DHA raises a question about the long-term clinical consequences of treatment of the skin with this commonly used compound.

In 1973 the FDA approved the color additive dihydroxyacetone (DHA) for external application to the human body. The uses and restrictions heading in the Code of Federal Regulations, for dihydroxyacetone reads:

Uses and restrictions. Dihydroxyacetone may be safely used in amounts consistent with good manufacturing practice in externally applied drugs intended solely or in part to impart a color to the human body. Authorization for this use shall not be construed as waiving any of the requirements of section 505 of the act with respect to the drug in which it is used.

The advent of spray tanning booths has introduced new safety questions regarding inhalation and contact with mucous membranes, lips and eyes. The FDA resource sheet on sunless tanners and bronzers, current as of March 15, 2022, says:

As noted above, the use of DHA in 'tanning' booths as an all-over spray has not been approved by the FDA, since safety data to support this use has not been submitted to the Agency for review and evaluation, When using DHA-containing products as an all-over spray or mist in a commercial spray 'tanning' booth, it may be difficult to avoid exposure in a manner for which DHA is not approved, including the area of the eyes, lips, or mucous membrane, or even internally.

Consequently, FDA advises asking the following questions when considering commercial facilities where DHA is applied by spraying or misting:

If the answer to any of these questions is 'no,' the consumer is not protected from the unapproved use of this color additive. Consumers should request measures to protect their eyes and mucous membranes and prevent inhalation.

The Skin Cancer Foundation has a fact sheet on the risk factors of tanning:

Tanning outside or indoors can have dangerous consequences. While often associated with good health, the 'glow' of a tan is the very opposite of healthy; it's evidence of DNA injury to your skin. Tanning damages your skin cells and speeds up visible signs of aging. Worst of all, tanning can lead to skin cancer.

It's a fact: There is no such thing as a safe or healthy tan. Tanning increases your risk of basal cell carcinoma, squamous cell carcinoma and melanoma.

Their FAQs dismisses the idea of a "base tan" to protect from sunburn as all UV rays are harmful, and wraps up with some easy to remember principles including: