Did the Waunakee Community School District in Wisconsin put a "furry protocol" in place to normalize students who identify as and act like cats and dogs at school? No, that's not true: According to the superintendent of the school district, there are no such protocols in place.

Ok, this crap has to stop! I don't really agree with 60 or 70 different genders either, but for crying out loud! No child is a CAT or DOG!! Just stop! Get them mental health help, but stop enabling them. 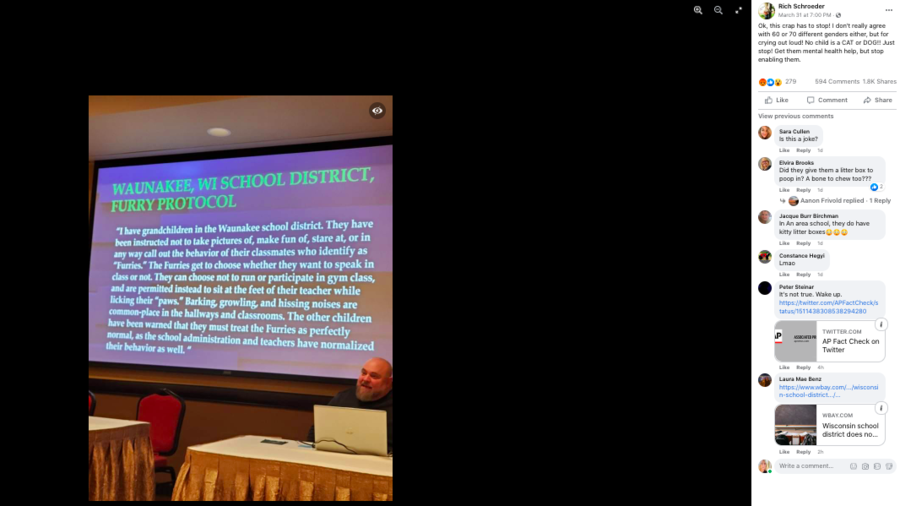 Thanks for your question about the misinformation circulating on social media. The Waunakee Community School District does not have protocols for Furries, nor do we allow disruptions in our school and classrooms.

"Furry refers to people who have a keen interest in, or even dress up as, anthropomorphic animal characters, like those often seen in comics, games, and cartoons," according to the Merriam-Webster dictionary.

The origin of this false claim appears to be from the March 17, 2022, episode of the Dr. Duke Show podcast, hosted by James "Duke" Pesta, a professor at the University of Wisconsin-Oshkosh. Pesta interviewed Wisconsin talk radio host Vicki McKenna, a self-described conservative convert and reformed Marxist. Her claims that some Waunakee students identify as furries went viral, including on Twitter posts such as this one.

On the show McKenna claimed she had received several emails including one she quoted from and that is seen on the screen in the photo of the Facebook post:

I have grandchildren in the Waunakee School District. They have been instructed to not take pictures of, make fun of, stare at, or in any way call out the behavior of their classmates who are 'Furries.' The Furries get to choose whether they want to speak in class or not. They can choose not to run or participate in gym class, and are permitted instead to sit at the feet of their teacher and lick their 'paws.' Barking, growling and hissing noises are common-place in the hallways and classrooms. The other children have been warned that they must treat the 'Furries' as perfectly normal, as the school administration and teachers have normalized their behavior as well.

Lead Stories debunked a similar claim here. And NBC News reported that a "Nebraska lawmaker apologizes for debunked litter claim," on March 29, 2022. State Sen. Bruce Bostelman had repeated the false claim that children were dressing and acting like cats and dogs in school and that schools were putting litter boxes in the school bathrooms during a televised legislative debate, which went viral. He has since apologized.