Did mass shootings in the United States increase more than 90 percent from 2017? Yes, that's true: While there are various definitions for what is considered a mass shooting, the Gun Violence Archive recorded a 98.9 percent increase in mass shootings in the U.S. from 2017 to 2021. The FBI recorded a similar percentage increase for active shooter incidents, which increased 96.8 percent from 2017 to 2021. However, the FBI does not consider active shooter incidents and mass killings the same statistic.

The fact there has been another school shooting in this country and Mass shootings are up 95% since 2017 🥹 why? Evil! Pure evil! To the families, children, faculty, OUR country, I am with you 💔 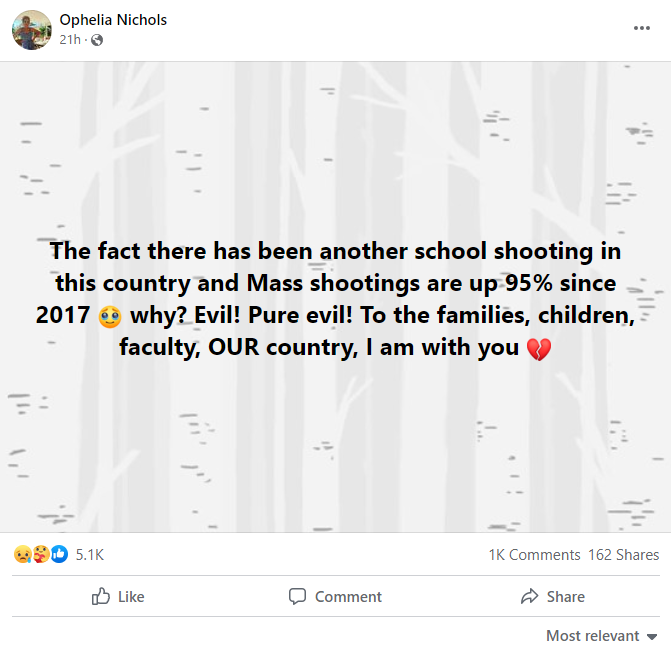 At the time of writing, the Gun Violence Archive, a nonprofit corporation with an online archive about U.S. gun violence, has recorded the total number of mass shootings in the U.S. from 2014 to 2021. According to the archive, a mass shooting is defined as at least four individuals shot in an incident -- either injured or killed -- not including the shooter.

The archive lists the number of mass shootings as 348 in 2017 and 692 in 2021. That is an increase of about 98.9 percent. At the time of writing, this information was last updated on May 23, 2022. The archive pulls from thousands of sources to determine these data, and each incident is verified. Screenshots of the gun violence data on the archive from 2017 and 2021, respectively, are shown below:

The FBI report "Active Shooter Incidents in the United States in 2021" (archived here) shows that the 61 active shooter incidents in 2021 were a 96.8 percent increase in such incidents compared to 2017.

The FBI defines an active shooter as one or more individuals actively engaged in killing or attempting to kill people in a populated area. Implicit in this definition is the shooter's use of a firearm. The active aspect of the definition inherently implies the ongoing nature of an incident, and thus the potential for the response to affect the outcome, whereas a mass killing is defined as three or more killings in a single incident.

Lead Stories reached out to the Gun Violence Archive and the FBI for additional comment and will update this fact check as needed.