Do many media outlets recycle old photos of monkeypox lesions when reporting on current or past outbreaks of monkeypox? Does this indicate that there have not been any new cases of monkeypox found and the reporting is not factual? No, that's not true: It is common practice for media outlets to use stock photos. The screenshots in this claim do show the same monkeypox images used in articles from several news outlets in different years. Reverse image search shows that all these images have been used by many outlets over time.

Lmfao!
Folks..if they're sellin' ya monkey pox, why don't they at least use real, current pics?
For God's sake, THINK about it! 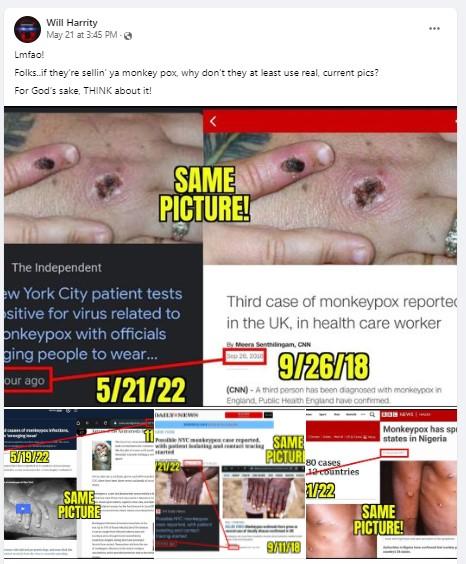 Since mid-May 2022, monkeypox has been confirmed in 16 countries in Europe, North America and Australia. The U.S. Centers for Disease Control and Prevention (CDC) has posted a level 2 travel alert, practicing enhanced precautions while traveling. Due to ethical regard for patient privacy, there is no expectation that news reports about this 2022 outbreak of monkeypox should, or would, carry photos of the people suspected or confirmed to be infected now. This also holds true for outbreaks in the past. For this reason it is common to see the same photos from other years and other locations used as a generic illustration of what monkeypox lesions look like.

For the sake of clarity, the source images appearing in the screenshots in the Facebook post above, appear numbered below in this Lead Stories composite image.

The screenshots in the Facebook post are marked up with bold yellow type that highlight the date of the articles and the words "SAME PICTURE," indicating the photo appeared in more than one article. Archived Tineye reverse image search results show hundreds of websites and articles that have featured photo 1, photo 2, photo 3 and photo 4. The few examples featured in the Facebook post's screenshots are just the tip of the iceberg.

Lead Stories cannot verify the proper captioning of each instance, but most outlets, at a minimum, name the stock image company where the photos originate, or provide captioned context as found in this September 10, 2018, dailymail.co.uk article that uses photos 1 and 2. They were captioned:

Image shows a stock picture of a monkeypox patient. Symptoms typically start as a rash that develops into skin lesions that later scab and drop off. These can be infectious (UIG via Getty Images)

The screenshot of photo 1 shows an independent.co.uk headline for an article published on May 21, 2022, "New York City patient tests positive for virus related to monkeypox with officials urging people to wear masks." That article currently features a video of Canada's Chief Public Health Officer Theresa Tam -- not photo 1. Lead Stories did not find an archived copy of this independent.co.uk article with photo 1 but it may have been updated before it was archived. The headline of a September 26, 2018, cnn.com article, also using photo 1, is, "Third case of monkeypox reported in the UK, in health care worker." In this article, photo 1 is marked with the source, "CDC/Getty Images" but no additional captioning. Photo 1 dates back to the 2003 monkeypox outbreak in the Midwestern U.S.

The descriptive information for photo 1 on gettyimages.com indicates the photo originated from a handout from the CDC. Although there were CDC publications about that 2003 monkeypox outbreak, Lead Stories was unable to find the original source of photo 1 on the CDC website. The Getty caption (with typographic errors) reads:

Monkey Pox Lesions
UNDATED ? JUNE 5: In this Centers for Disease Control and Prevention handout graphic, symptoms of one of the first known cases of the monkeypox virus are shown on a patient?s hand June 5, 2003. The CDC said the viral disease monkeypox, thought to be spread by prairie dogs, has been detected in the Americas for the first time with about 20 cases reported in Wisconsin, Illinois, and Indiana. (Photo Courtesy of CDC/Getty Images)

The images in the screenshots and many others appear in "monkeypox" search results of both the gettyimages.com collection and the Public Health Image Library (PHIL) at cdc.com. The original descriptive captions are as follows:

Getty: Monkeypox Virus
Monkeypox, A Member Of The Orthopox Family Of Viruses, Is An Infection Accidentally Transmitted To Humans Due To Its Similarity To The Smallpox Virus. Although Animals Infected With Monkeypox Exhibit No Symptoms, Infected Humans Manifest High Fever Accompanied By Headaches, Cervical And Inguinal Adenopathy, And Cutaneous Lesions That Are Similar To Those That Characterize A Smallpox Infection. As With Smallpox, No Effective Medical Treatment Has Been Identified. Here, The Arms And Legs Of A 4 Year Old Girl Infected With Monkeypox. Bondua, Grand Gedeh County, Liberia. (Photo By BSIP/UIG Via Getty Images)

P.H.I.L.: This image from 1971, depicts a view of the right hand and leg, of a 4 year-old female in Bondua, Grand Gedeh County, Liberia, which reveals numerous maculopapular monkeypox lesions, enabling you to see the similarity of these lesions to those of smallpox.

Getty: Monkeypox Lesions
Close-up of monkeypox lesions on the hands of a patient during the recuperative stage of the virus, Democratic Republic of the Congo, 1997. Courtesy CDC/Mahy et al. (Photo via Smith Collection/Gado/Getty Images)

P.H.I.L.: This 1997 image was created during an investigation into an outbreak of monkeypox, which took place in the Democratic Republic of the Congo (DRC), formerly Zaire, and depicts the dorsal surfaces of the hands of a monkeypox case patient, who was displaying the appearance of the characteristic rash during its recuperative stage. Even in its stages of healing, note how similar this rash appears to be when compared to the recuperative rash of smallpox, also an Orthopoxvirus.

Getty: Monkeypox Lesions
Right arm and torso of a patient with lesions during an active monkeypox infection, in the Democratic Republic of the Congo, 1997. Courtesy CDC/Mahy et al. (Photo via Smith Collection/Gado/Getty Images)

P.H.I.L.: This 1997 image was created during an investigation into an outbreak of monkeypox, which took place in the Democratic Republic of the Congo (DRC), formerly Zaire. Pictured here, was the right arm and torso of a patient, whose skin displayed a number of lesions due to what had been an active case of monkeypox. You'll note how this rash resembles smallpox. PHIL images 12745 through 12784 depict a full slide presentation telling the story of this investigation.

Lead Stories recently debunked a claim about monkeypox, shingles and the COVID-19 vaccine.