Did The Washington Post publish an article by technology columnist Taylor Lorenz titled, "This dog is the new face of online homophobia"? No, that's not true: This is not a screenshot of a real article but a spoof made to look like an "Internet Culture" feature in the Post. There is some confusion by design about who is the intended target of the trolling, but this fact check will simply stick to the question of whether this is a real Washington Post article -- it is not.

Photos taken from the Instagram account of a dachshund named @Whitney_Chewston had homophobic captions added to them to make satirical memes that went viral in the spring of 2022. One person took the joke a little further on Twitter and posted a fake screenshot of a purported Washington Post article about the viral trend. It was not a real article. Some people sharing the fake screenshot were in on the joke and others were not. One copy of the screenshot appears in a Facebook post published by the page "I, Hypocrite" on May 16, 2022. The text in the screenshot reads:

This dog is the new face of online homophobia

Internet trolls have turned a dachshund into a viral homophobic meme - and her gay owners don't know what to do. 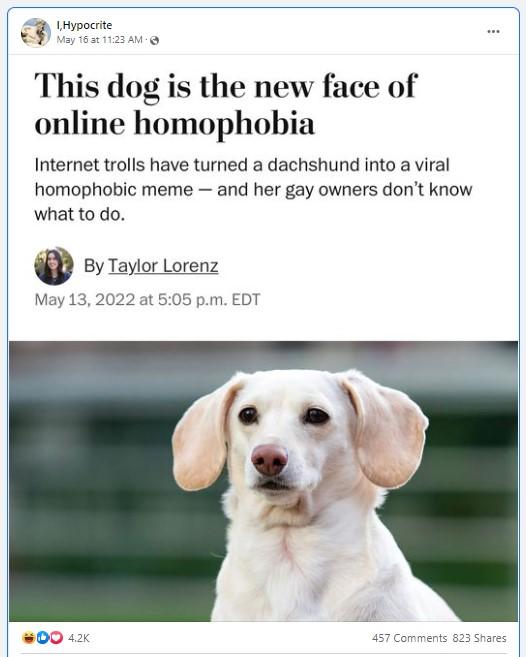 The Washington Post never published this article. On May 16, 2022, Lorenz retweeted the tweet with the fake screenshot with the caption:

Get me to 500k followers and I'll actually write this article

This is not a Washington Post or @TaylorLorenz story. It's a headline cut and pasted on to our template from another website.

An advanced Google search selecting for the exact phrase, "the new face of homophobia" from only washingtonpost.com yielded no results. There is now an article with a similar headline as the spoof screenshot. On May 16, 2022, lgbtqnation.com published, "This dog is the new face of online homophobia - Whitney Chewston has two gay dads, and now her image is skewering homophobes and transphobes online." The article includes many embedded examples of the memes online and explains:

A gay couple's dachshund named Whitney Chewston is not homophobic, her owners want you to know, despite how she earned her internet fame.

Whitney Chewston memes have been shared online for over a year, and they usually involve a picture of the dog with a homophobic statement on top of it, as if the canine just doesn't like LGBTQ people.

The website knowyoumeme.com has an entry for the Homophobic Dog/ Not Too Fond Of Gay People that explains the origins of the meme and includes a March 28, 2022, video interview with Ben Campbell and Logan Hickman, who refer to themselves as Whitney's dads.