Will the World Health Organization (WHO) have the authority to lock down all of America? No, that's not true: The claim, made by former U.S. Rep. Michele Bachmann, spins proposed changes to WHO rules into something much greater than they are. The actual amendments, which can be seen here, suggest a variety of changes, including some on notice and surveillance. But there is zero mention of WHO having the authority to lock down America.

The claim appeared in an article (archived here) published by Israel365News on May 13, 2022. Titled "ON MAY 22: WHO WILL HAVE AUTHORITY TO LOCK DOWN ALL OF AMERICA," it opened:

Officials from the Biden Administration are working to give the World Health Organization the power to unilaterally declare a health emergency in any country, thereby giving them emergency powers. The message from the administration and the vote are going unreported by the heritage media, but former Congressman Michele Bachmann is working hard at sounding the alarm. 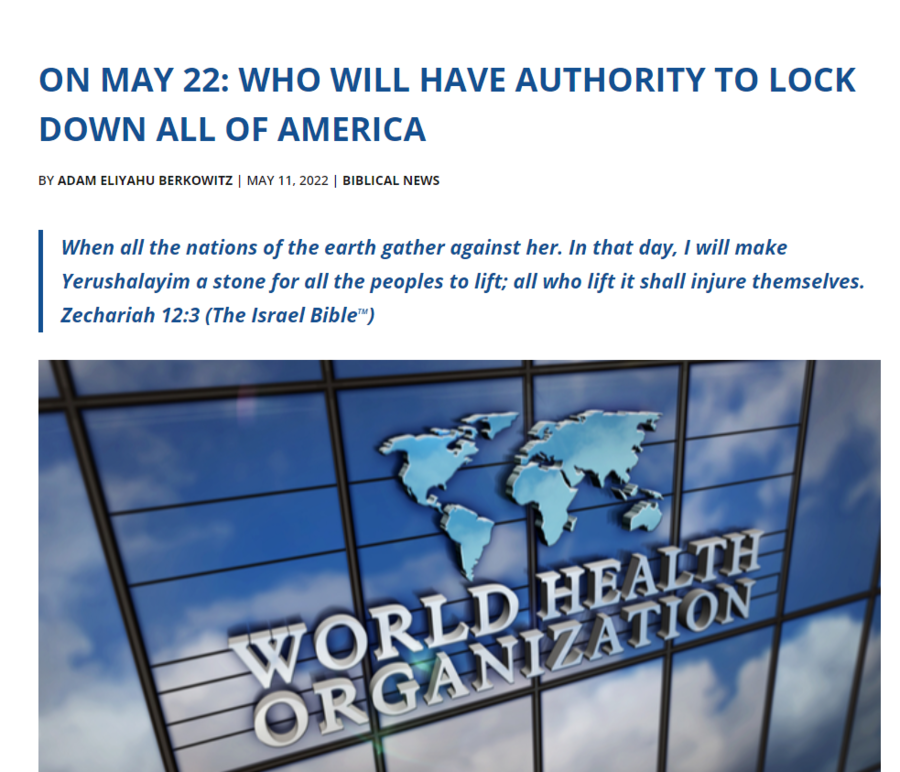 The article embedded a tweet, which contained a clip from an interview between Bachmann and Steve Bannon. During the interview, Bachmann claimed:

The Biden administration is bringing amendments that would propose that all nations of the Earth cede their sovereignty over national healthcare decisions to the WHO, the World Health Organization. So what this would mean, Steve, is that the WHO would have decision-making authority to intervene into United States government policy, and any nation in the world, without our permission.

She mentioned Shanghai's lockdown of some 26 million people and said:

The WHO would have the authority be able to impose that here in the United States.

Later, Bachmann added, about the amendments:

What this does, Steve, bottom line, is it creates a platform for global governance ... through the WHO.

Bachmann appeared to be referencing amendments that the United States has proposed to the existing International Health Regulations (2005). The proposed changes, which can be seen here, are on the agenda (see page four) for an upcoming meeting of the World Health Assembly, the main decision-making body of WHO. The assembly will be held from May 22 to May 28, 2022.

The proposed amendments touch on surveillance, notification, the creation of a compliance committee, and the determination of a public health emergency of international concern. Among the suggestions are that member states share with WHO the genetic sequence data of suspect pathogens, that a regional director may determine that an event constitutes a public health emergency of regional concern, and that WHO develop early warning criteria for assessing and updating the risk "posed by an event of unknown causes or sources."

There is no mention of lockdowns anywhere in the amendments, much less of WHO having the authority to lock down any country.

Lead Stories reached out to WHO, which responded by saying only, "Please note, this is a Member State led process," in effect referring the question back to its member states, including the U.S.

Lead Stories also reached out to the U.S. Department of Health and Human Services to ask about the proposed amendments. We will update this story, as appropriate, if we receive a response.