Was Amber Heard arrested for perjury and cocaine possession as of June 3, 2022? No, that's not true: This is a completely made-up claim, published by a website that calls itself a "trusted source for satire."

The claim appeared in an article published by the Vancouver Times on June 3, 2022, titled "Amber Heard arrested for perjury, cocaine." It opened:

Amber Heard has been arrested by state police for multiple criminal offences including perjury and possession of cocaine. Heard is accused of making multiple false statements on the witness stand during her defamation trial. When police went to her residence to execute the arrest warrant, Heard was found to be in possession of a small [...] 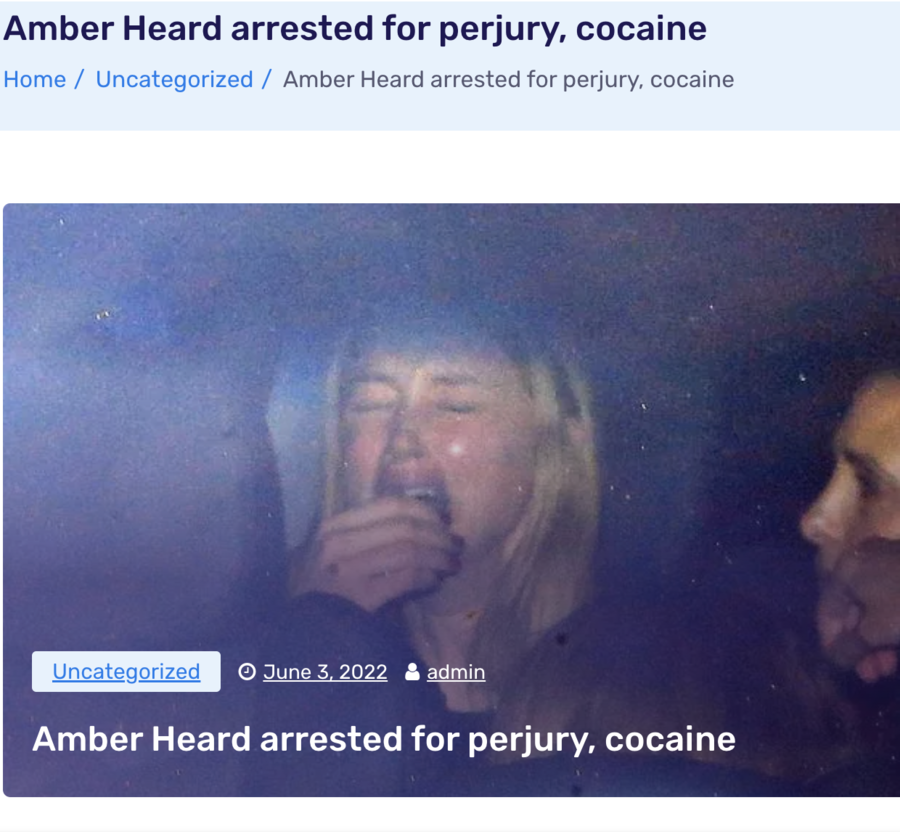 The article claimed police "went to her residence," which Heard said was in Yucca Valley, California, during her defamation trial against Johnny Depp. She purchased a home in the desert town outside of Los Angeles in 2019. Lead Stories conducted searched the San Bernardino County Jail inmate list and Heard was not listed.

Heard has not been charged with perjury as of June 3, 2022, and there is no evidence she was arrested. Lead Stories reached out to her attorney and will update the story when a response is received.

The image in the news article is from May 2016, when Heard appeared upset in a car following a hearing in a Los Angeles court. The photo, owned by the photo agency X17, was published on multiple news outlets at the time.

The Vancouver Times is a blog that is self-described as "satire." It says on its About Us page:

There is even a section on the website titled "SATIRE" where the fabricated news stories are tagged. Lead Stories has debunked multiple stories by the Vancouver Times.

The Vancouver Times website includes a disclaimer that they are a satire site and should not be confused with mainstream media.

Lead Stories has a satire policy that explains why sometimes, even if we understand that the story is satire, we need to write a fact check about it.

At Lead Stories we will label untrue stories as satire if they meet following criteria:

'a) They are funny

b) They criticize/expose/ridicule/mock people or ideas

c) A reasonable person can tell it is a joke'

Of course there are grey areas: not everybody enjoys the same type of humor and the definition of 'reasonable' is sometimes quite flexible. Note that we do not require a disclaimer to be present: a funny meme mocking some government policy by poking fun at the supposed effects is a perfectly valid form of satire. But a clear and visible disclaimer can sometimes help us in our decision: if we can see it, so can our hypothetical 'reasonable person'.

Funny fictional stories that don't actually criticize/expose/ridicule/mock people or ideas can also be labeled as satire if there are clearly visible indicators the story is not real.